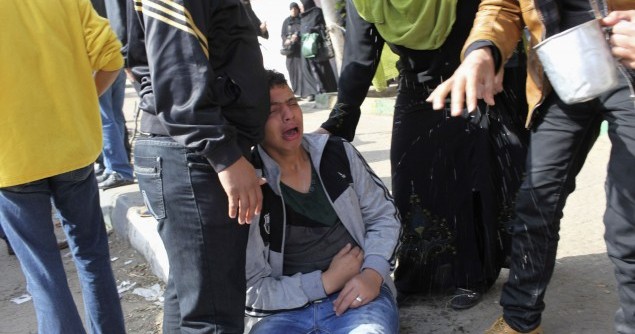 Egypt’s initial post-revolt military rulers and their elected successor, President Mohammed Morsi, were caught between a rock and a hard place as soon as a politically loaded soccer brawl a year ago in the Suez Canal city of Port Said got out of hand, killing 74 supporters of crowned Cairo club Al Ahly SC.

Mr. Morsi’s dilemma was evident when a Cairo court on Saturday sentenced 21 of 73 people that include nine mid-level security officials, to death on charges of responsibility for the brawl. The incident, the worst in Egyptian sporting history, is widely seen as an effort that got out of control to teach a lesson to militant soccer fans or ultras who played a key role in the toppling two years ago of president Hosni Mubarak, subsequent opposition to military rule and protests against Mr. Morsi’s authoritarian style of government and failure to address a worsening economic crisis.

The 21 death row defendants are all lower class supporters of Al Masri SC, the Port Said club in whose stadium the Al Ahli fans died. The court said it would rule on the 51 remaining defendants, including the security officials, on March 9. It was not immediately clear why a decision in their cases was postponed. Egyptian Prosecutor General Tal’at Abdallah earlier this week submitted to the court what he called new evidence.

The court’s verdict broadcast live on state television was certain to anger the Al Ahli fans if it did not respond to their demand for justice in the form of a harsh sentence or the Al Masri fans if they were held responsible. The question was never whether violence would erupt as soon as the verdict was announced but whether it would be in Cairo or in Port Said.

Ultimately, it was Port Said where 17 people, including two police officers, were killed at the time of this writing in clashes with security forces across the city including an attempt by demonstrators to storm the prison where the death row inmates are being held as well as the city’s main court building and police stations. The government dispatched army units to Port Said in a bid to regain control of the situation. By contrast, Al Ahli fans demonstrated in joy in Cairo in front of their club’s headquarters.

Despite the deep-seated hostility between Al Masri and Al Ahli fans, both groups agree that the court has yet to address the question of who was behind the brawl, although the court may still do so in its written justification of Saturday’s death sentences or when it rules again on March 9. Both groups believe that most of those sentenced on Saturday and those that are still on trial were at best pawns in a larger battle.

Al Ahli fans believe that the Supreme Council of the Armed Forces (SCAF) that was in power at the time of the Port Said incident and the ultras’ arch enemy, the police and security forces, the most despised institutions in Egypt because they are seen as the repressive arm of the former Mubarak regime, were responsible for the death of their brethren.

The Al Masri fans and a wide swath of public opinion in Port Said are convinced that they and their city have been made scapegoats. Port Said expressed its conviction on Saturday by taking the Egyptian flag from government offices; some residents went as far as calling for the city to declare itself independent. “We need to know who is provoking the rift between Port Said and Cairo,” said an Al Masri supporter before the verdict was announced.

Port Said’s sense of being thrown to the wolves by the government is long standing. “We call on Egypt’s intellectuals and faithful media personnel to stand up against the tendentious campaign to drive a wedge between the residents of Port Said and Cairo and completely isolate Port Said…. The Port Said residents are leading calls for the punishment of the culprits. However, they fully reject any attempts to wipe out the name of Masry from Egyptian football. Accordingly, we will not accept any excessive sanctions that will be considered as a collective punishment for the city and the club,” Port Said representatives in parliament said in a joint statement last year.

In that environment, Saturday’s ruling gives the government little to work with in putting the Port Said incident behind it. Protests in Port Said are likely to continue and harden resentment against the government in the city. The ruling satisfies Al Ahli fans’ immediate emotions and to some degree demands for justice but leaves unaddressed their clamor that those responsible for what they see as a conspiracy also be held accountable.

Neither the ruling nor government policy to date addresses an equally fundamental demand that both Al Masri and Al Ahli fans share: the need for a thorough reform of the police and security forces.

The riots in the wake of the court verdict constitute the peak of an iceberg of growing discontent in Egypt with the government’s failure to hold accountable police and security forces believed to be responsible for the death of more than 800 protesters since mass demonstrations erupted two years ago against the Mubarak regime and to address the country’s economic decline as well as Mr. Morsi’s rushing through of a controversial new constitution.

That discontent manifested in mass protests in recent days across Egypt in which scores of people were killed exactly two years after Mr. Mubrak was forced to resign after 30 years in office gave the Al Ahli demonstrations in recent days in demand of a harsh sentence and the eruption of violence in Port Said on Saturday an even more political dimension than they already had.

Mr. Morsi is left with a worsening political situation and growing public discontent and anger that he will only be able to resolve by embracing popular demands for more transparent government, reform and greater accountability of the police and security forces and a focus on turning around the country’s troubled economy. That is a tall order but one that has become all the more urgent with the court verdict, the ensuing violence and the deepening of discontent produced by the failure to provide answers to questions about what really happened in Port Said and why.