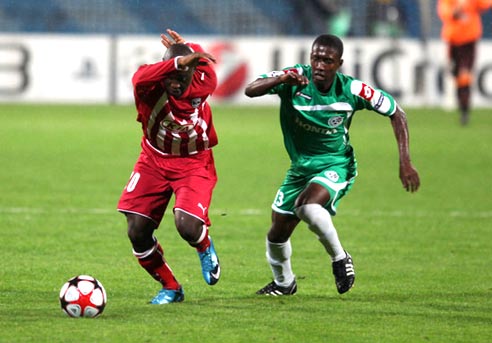 Taleb Tawatha’s emergence as one of Israel’s brightest soccer talents is a tale of fighting the Israeli odds of being an Arab in a predominantly Jewish society, a black in a majority Palestinian white community and a scion of one of the Israel’s most disadvantaged, underdeveloped towns.

A shy, scrawny 18-year old whose family hails from Sudan, Tawatha cemented his billing as the world’s best Under-20 left back and a rising star in Israeli Premier League team Maccabi Haifa’s last six matches where he substituted for injured international defender Peter Masilela, one of the team’s best ever left-backs..

His performance earned him an invitation by Israel national team coach Luis Fernandez to train with his squad, which is in desperate need for a reliable left flank defender.

Tawatha’s journey to soccer stardom started in Jisr ez-Zarka an Arab town that lies in between the Israeli cities of Tel Aviv and Haifa and is known as one of Israel’s municipalities with the lowest average income and highest high school dropout rate and tense racial relations.

None of this phased Tawatha whose father, the principle of the town’s school, ensured that he balanced his soccer training with his need to complete his secondary school education. Maccabi Hiafa assisted with funding for tutors to help him achieve high scores.

Tawatha demonstrated his metal on and off the pitch. In his private life, he has refused to allow bigotry disrupt his long-standing relationship with a girl from Jisr ez-Zarka’s majority white community, whom he is determined to marry.

Perhaps not surprisingly, Israel’s perennial conflict with the Palestinians shaped Tawatha’s decision to play for Haifa when he was just 11 years old. Tawatha had just decided to attend the soccer school of Maccabi Tel Aviv when his uncle, a staunch Maccabi Haifa supporter, was killed in a terrorist attack in the nearby Israeli town of Afula. To honor his uncle, Tawatha headed for Haifa.

He made his debut last season and looks set to permanently occupy the left-back position at Haifa’s Kiryat Eliezer Stadium with Masilela expected to this summer transfer to a European team.

Ironically, soccer is the one of the few things that lets Palestinians and Israelis at times look beyond their daily confrontations. Palestinian obsession with soccer translated into reduced anti-Israeli violence on the West Bank during the 2010 World Cup while Israel’s football association is the only soccer institution in the region to have launched a campaign against racism and bigotry.

The success of a Palestinian team, Bnei Sakhnin, winning the 2004 Israeli championship won it funding from Qatar to build its own stadium. The funding constitutes a rare direct Arab investment in Israel, which is largely boycotted by Arab states because of its unresolved dispute with the Palestinians.