International trade unions have called on world soccer body FIFA to deprive Qatar of its right to host the 2022 World Cup because it has failed to end what they term 21st century slavery and adopt international labor standards for the Gulf state’s more than one million foreign workers. 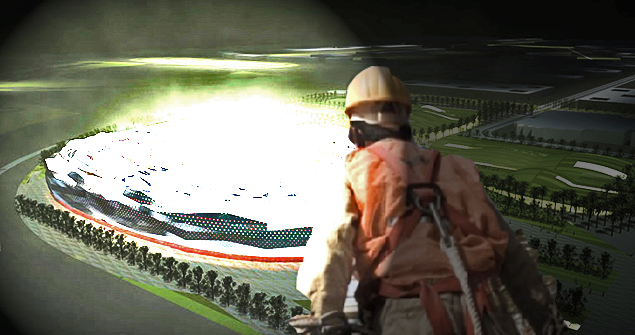 Ms Burrow said the ITUC had obtained a copy of a Charter for Migrant Workers that was drafted by Qatar’s World Cup organizing committee. She said the trade union was disappointed by the drafting process in which the committee failed to consult unions as well as its content. Sources said the draft charter was continuously being revised.

In a press release, the ITUC, which refuses to publish the draft charter, charged that it “shows contradictions with Qatari law and fails to give workers any real rights or protection from slavery conditions.” ITUC did not detail the legal contradictions.

Speaking in a telephone interview, Ms Burrow said ITUC’s campaign to take the World Cup away from Qatar was an effort to “escalate pressure” on the Gulf state. She said the ITUC would consider ways of stepping up pressure on FIFA and Qatar if the soccer body failed to opt for a revote of the awarding of the World Cup to Qatar latest at its general assembly in Mauritius at the end of May.

“The government of Qatar has had two years to do two things: introduce freedom of association and the kafala (sponsorship) system that effectively mounts to 21st century slavery. The government has done nothing. How long are we supposed to wait and listen to the same things? Three years? Five years? Ms Burrow said.

Ms Burrow was referring to the widely criticized sponsorship system common to various Gulf states that deprives workers of their free choice and gives employees full control over their employees.

Ms Burrow asserted that “hundreds of workers are dying and thousands more are injured in Qatar” as a result of its failure to adhere to international labour standards. “FIFA must act now- the longer the delay, the more workers will suffer and die,” she said.

The union official said the demand to deprive Qatar of the World Cup was boosted by the corruption scandals overshadowing FIFA and world soccer that have yet to produce evidence of wrongdoing on the part of the Gulf state as well as debate on whether the tournament in Qatar should be moved to the winter months because of the region’s extreme summer heat.

The demand to deprive Qatar of the World Cup constitutes a change of union tactics. While the ITUC has threatened to call on its 175 million members in 153 countries to boycott Qatar at a time that it is expected to recruit up to a million additional workers to construct billions of dollars in World Cup-related infrastructure, it had initially said it would first put Qatari promises to the litmus test.

These promises included a legally non-binding oral pledge in November by Qatari Labour Minister Nasser bin Abdulla Alhumidi to effectively allow the formation of independent trade unions. “After a full and frank discussion, Qatar’s labour minister assured me that if workers want to establish a union he will make sure that those who decide to join a union will not be punished. We will test him on that,” Ms Burrow said at the time. ITUC officials said subsequently that they were preparing to establish a union in Qatar later this year.

To be sure, few analysts or labour and human rights activists expect Qatar to allow free and independent trade unions and to accept the principle of collective bargaining – the two major issues dividing Qatar and the union.

In a bid to fend off union demands, Qatar has moved to improve workers’ living and working conditions. It is seeking to ensure enforcement of safety and security standards, monitor on-time salary payments, reduce the number of workers living in one room from eight to four, and is building a city for workers that would include hitherto non-existent recreational facilities. It is also reviewing much criticized recruitment procedures that reinforce the sponsorship system and leave workers heavily indebted.

In a break with Gulf reluctance to give foreign nationals a stake in their host nations, Qatar’s soccer league said this month that it plans to create a league for un- and low-skilled guest workers who account for the majority of the country’s population. The decision follows this month’s successful organization of a soccer tournament for foreign workers deprived of relaxation and entertainment facilities. The league would involve 32 clubs, double the number that competed in the tournament.

In a region in which lop-sided demography is the elephant in the room when it comes to the future of the smaller states, Qatar Stars League (QSL) executive director Adil Ahmed, a Pakistani national, said in what is an almost revolutionary statement that the idea of the foreign workers’ league was “to give low-income workers a sense of belonging in the country they serve.” His deputy, Hani Taleb Ballan, said the league would workers give “a fair opportunity to enjoy the life they had in their countries of origin in Asia and Africa”.

Qatar University sociologist Kaltham Al Al-Ghanim recently called on the country’s sports clubs to set up branches in the capital’s Industrial Zone where many of foreign workers are housed “to channel their energy to productive avenues and hunt for sporting talent.” She cautioned that if foreign workers were allowed to “live on the social fringes, the danger is they would take to illegal activities and emerge as a threat to social security.” Ms. Al-Ghanim argued further that this would offer Qatari clubs an opportunity to spot local talent.

Smaller Gulf states whose nationals constitute a minority of the population have until now gone out of their way to ensure that foreigners have no sense of belonging out of fear that this would encourage them to stand up for their rights.

The critics charged that the ITUC’s demand robbed it of the leverage it had obtained with the awarding of the World Cup to Qatar. Human rights groups have long criticized Qatar and other Gulf states for their labor practices. But unlike the ITUC they never had more than moral leverage. Qatar’s dependence on foreign labor for its World Cup infrastructure enhances the ITUC’s power given that it in contrast to the human rights activists can mobilize millions of people.