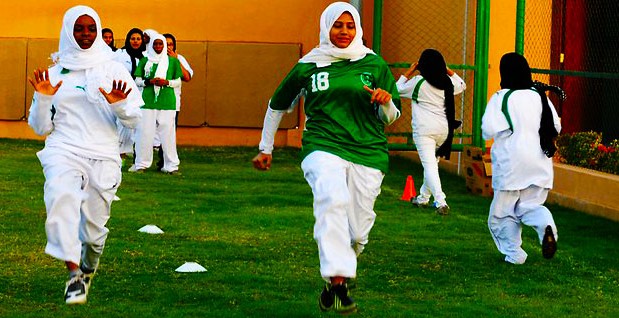 Reading a Human Rights Watch (HRW) report last week on the “denial of women’s and girl’s rights to sport in Saudi Arabia,” had me shaking my head and reviewing a lifelong love of sports and physical activities.

Was I on my way to hell? Indeed not. Sport has always been a big part of my life. It has helped me understand teamwork, sportsmanship and adopt a healthy lifestyle.

HRW’s 51-page report, ‘Steps of the Devil’: Denial of Women and Girls’ Right to Sport in Saudi Arabia, published on 15 February 2012, documents “discrimination by Saudi Arabia’s Ministry of Education in denying girls physical education in state schools, as well as discriminatory practices by the General Presidency for Youth Welfare, a youth and sports ministry, in licensing women’s gyms and supporting only all-male sports clubs. The National Olympic Committee of Saudi Arabia also has no programs for women athletes and has not fielded women in past Olympic Games,” and the upcoming Games in London this summer.

Could I live without sports? Definitely. But would I have the same quality of life? Absolutely not!

My mom, Vicky, used to say I learned to swim before walking. First in Jeddah where I was born, then in Baghdad where we moved, swimming was my first and favored sport. I got into it wholeheartedly and collected a good number of small trophies.

Sports were always a drive in the family. My dad, Esa, was a football champion in Palestine and then switched to tennis. His name is engraved on the walls of St. George’s School in Jerusalem. Every trip we made back to the Holy Land, he would take us to visit his school and proudly show us the plaques bearing his name on the walls of the famous institution.

In primary school in Tunis and then at the Lycée, the two hours of physical education per week were my favorite classes. But the one thing I never got around was rope climbing. I just couldn’t coordinate the simultaneous hands and legs movement. The physical education exam helped boost my Baccalauréat grade in my continuing appreciation for all things physical and outdoors.

We got our first black and white television in 1966 to watch England play, and win, the FIFA World Cup. There was no turning back after that. The TV was switched on at weekends for the football games, mostly the Italian Serie A matches aired then in Tunisia.  Wherever we were, we would rush home on Saturday and Sunday afternoons, whatever we were doing, to watch the games with dad. Friends would join us and the weekend would kick off.

My parents always encouraged outdoor activities like walking, cycling and swimming during summer vacation. Any activity we chose was always encouraged, even when I took up fencing for a while. Dad shook his head, but for months still took me to my fencing class. He must have been pleased when that phase died out.

During the 15-year civil war in Lebanon, there was hardly a day I missed going to the beach. Often we would swim while bullets were raining down on the Sporting Club. I continued swimming in London. Luckily the gym was minutes away from my home and office, making it easy to break up the long days with an hour of laps. Living and working in Chelsea, a stone’s throw away from Stamford Bridge, I adopted Chelsea FC as my football team more than 25 years ago.

In Dubai, I found gyms expensive so took to the streets, where apart from the past few months, I run in the open air. This led to my participation in the 10K run at the Dubai Marathon in 2009 (see Why I run? – August 13, 2010).

That’s why I find it hard to understand how sports could be “steps of the devil.”

HRW has called on the International Olympic Committee (IOC) to make ending discrimination against women in sports in the kingdom a condition for Saudi Arabia’s participation in Olympic sporting events, including the 2012 London Games.

“‘No women allowed,’ is the kingdom’s message to Saudi women and girls who want to play sports,” said Christoph Wilcke, senior Middle East researcher at Human Rights Watch. “The fact that women and girls cannot train to compete clearly violates the Olympic Charter’s pledge to equality and gives the Olympic movement itself a black eye.”

Saudi Arabia is one of only three countries in the world never to have sent a female athlete to the Olympics. The other two, Qatar and Brunei, do not bar women from competitive sports and their women athletes have participated in other international sporting competitions.

However Qatar announced on February 20 that it would send women athletes to the Olympics for the first time at the London Games. The IOC has offered Qatar wild card invitations for two female athletes to compete in London — swimmer Nada Arkaji and sprinter Noor al-Malki.

The UAE made history this month when it announced its first women’s track and field squad will be heading to the London Olympics.

Indeed, Sheikha Maitha bint Mohammad bin Rashid Al Maktoum — daughter of HH Sheikh Mohammad Bin Rashid Al Maktoum, Vice-President and Prime Minister of the UAE and Ruler of Dubai – also made history for the UAE in 2008. At the Beijing Olympics, Sheikha Maitha became the first woman to represent the Emirates at the Olympic Games where she competed in the 67kg taekwondo event. She was also the first female flag-bearer at the Olympics from the Gulf region, inspiring young women around the Gulf and Middle East.

HRW has called on Saudi Arabia to act within one year to introduce physical education for girls in all schools, open women’s sections, and allocate funds to women’s sport in the youth ministry, the Saudi National Olympic Committee, and Saudi sports federations. The report says “these steps are necessary evidence of a Saudi effort to end discrimination against women in sports and thus a prerequisite for allowing the kingdom to be represented in Olympic events.”

HRW adds, “Women and girls are not only denied the thrill of competition, but also the physical and psychological benefits, leading to longer, healthier lives, that participation in sports conveys…

“Addressing health threats through expanded sports opportunities for women and girls has also been supported by Saudi religious leaders. For example, Sheikh Ali Abbas al-Hikmi, a member of the Council of Senior Religious Scholars, the highest religious body, considered women practicing sport an ‘Islamic necessity’ and Adil al-Kalabani, former chief imam of the Holy Mosque in Mecca, supported opening women’s sports clubs… Other government clerics of the Council of Senior Religious Scholars, like Sheikh Dr. Abdelkarim al-Khudair, however, have decried women’s sports as ‘steps of the devil’ leading to moral corruption.”

The Olympic Charter states, “The practice of sport is a human right. Every individual must have the possibility of practicing sport, without discrimination of any kind [and any] form of discrimination with regard to a country or a person on grounds of race, religion, politics, gender or otherwise is incompatible with belonging to the Olympic Movement.”

Apart from appreciating and watching sports on TV, sports are a way of life that can be adopted in a variety of ways and means. It could be walking, running, swimming, basketball, tennis, volleyball, beach sports… The possibilities are endless.

Practicing one sport or other is one of the things we can do for our bodies and ourselves and can only lead to better health and quality of life.

Let’s do it, let’s all get sporty. The devil can wait…