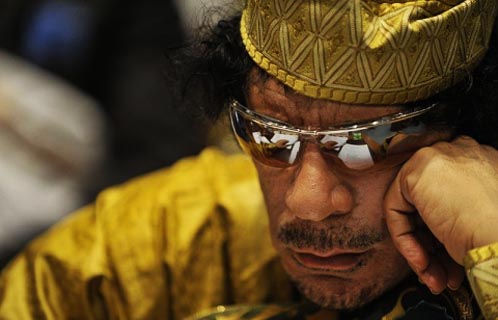 With the wave of anti-government protests that have already toppled two Arab leaders engulfing Libya, Libyan leader Col. Moammar Gaddafi seemed set to use the opening of a new stadium in advance of next month’s African U-20 tournament to confront his detractors.

Gaddafi, whose eccentricity stretches to his interest in soccer, was scheduled to open a stadium in Benghazi, Libya’s second largest city and the venue of the latest anti-government protests in the Middle East that have already ousted the leaders of Libya’s neighbors, Egypt and Tunisia.

Gaddafi intends the opening of the Benghazi stadium to be a show of popular support, but Libyan activists fear it could become the setting for clashes between pro- and anti-governments supporters in emulation of the failed use of thugs in Egypt and by embattled Yemeni President Ali Abdullah Saleh to beat the protesters into submission.

“There have been unconfirmed stories that they’ve been hiring thugs – people who would use violence to break up protests and so on,” former British ambassador to Libya, Oliver Miles, told the BBC.

Miles said he believed that several soccer matches in Libya scheduled for Thursday had been cancelled in a bid to prevent them from becoming rallying points for protesters.

Soccer fans played a key role in the recent Egyptian protests and the soccer pitch has also been the venue of protests in recent months in Jordan and Iran.

Hundreds of people took to the streets of Benghazi on Wednesday, protesting the arrest of an outspoken dissident in a county where protests are banned. Some 14,000 people have joined in recent weeks a page on Facebook calling for mass demonstrations in a Day of Rage on Thursday. Facebook pages have played key roles in most of the recent protests in the Arab world.

The Benghazi protests follow demonstrations last month against corruption in public housing in Libyan provincial cities and government fears that US diplomatic cables disclosed by Wikileaks, detailing the corruption and decadent lifestyle of Gaddafi and his family could fuel further protests.

Sustained protests in Libya as happened in Egypt and Tunisia and are occurring in Yemen and elsewhere in the Middle East could force cancellation of the Confederation of African Football’s U-20 tournament that is scheduled to open in Libya on March 18.

Political upheaval across North Africa threatens to further throw a monkey wrench into the Africa Cup of Nations with Algeria, which is also being wracked by anti-government protests, and Egypt backed by Tunisia urging the Confederation of African Football (CAF) to postpone until August matches scheduled for March.

Libya’s sponsorship of soccer tournaments appears opportunistic juxtaposed against Gaddafi’s tirades against FIFA, soccer’s world body, in the wake of its failed bid to host the 2010 World Cup together with Tunisia.

Gaddafi identified at the time soccer matches in an essay written in clunky English on his website entitled ‘FIFA: Modify It or Cancel It,’ as the latest health hazard. Gaddafi appears on the website in a snappy white training suit kicking a ball.

The essay warns that “medical research has proven, and will prove further in the future, that those who have football (soccer) mania, and those addicted to the game are most at risk of psychological and nervous disorders… Mass Sports has been transformed into an exploitative activity monopolized by the rich dominant elite like the World Cup. The masses are reduced to playing the role of the idiotic spectator.”

Gaddafi went on to denounce the World Cup as a corrupt, slave market and called for reform of the rules deciding bids to host the tournament to prevent it from fostering racism, human trafficking and war.

To be fair, researchers at the Munich University Clinic noted a marked increase of heart attacks during the 2006 World Cup in Germany.