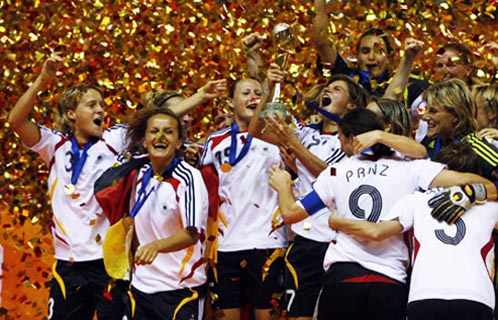 Of all the bids, a UAE success in clinching U-17 Women's World Cup would perhaps be the most significant in challenging the way conservatives view women's sport.

Middle Eastern nations are competing to stack up successful bids to host major soccer events in an effort to position themselves as sports leaders as well as the region as a sports hub.

The United Arab Emirates, not one to remain in the shadow of Qatar, the winner of the bid to host the 2022 FIFA World Cup and is current host of the Asian Cup, is bidding for three of the five upcoming competitions that will be decided by FIFA’s Executive Committee on March 2 and 3. Ghana is the UAE’s only competition for the FIFA U-17 World Cup 2013; Turkey and Uzbekistan are gunning alongside the UAE for the U-20 World Cup 2013 and in the case of the U-17 Women’s World Cup 2014, the UAE is up against Costa Rica, Ghana, Macedonia, Russia, and Uzbekistan.

Turkey is a regional soccer powerhouse even though it competes in Europe rather than the Middle East and is hosting the 2012 UEFA Euro Cup.

The UAE bids constitute an effort by the emirates to muscle their way into soccer after Dubai established itself as a venue for international tennis, golf and equestrian tournaments and Abu Dhabi became part of the F-1 Grand
Prix Circuit. Abu Dhabi hosted in December the FIFA Club World Cup.

Soccer ranks high on the to-do list of cash-rich oil sheikhs seeking glory for themselves and political and economic status for their fiefdoms. It is part of a strategy to drive tourism to a soccer-crazy, conservative part of
the world that suffers high temperatures in the summer, but is employing sports and culture to diversify its economy and establish itself as a popular tourism destination.

Of all the bids, a UAE success in clinching U-17 Women’s World Cup would perhaps be the most significant: It would boost women’s soccer in a chauvinist, male dominated part of the world in which women’s soccer is consider by many at best controversial and at worst blasphemous.

The struggle for women’s soccer in the Middle East is one that is fought in the bedroom against husbands who prefer to keep their womenfolk at home, in parliaments that denounce women players for competing in international tournaments and against clerics who condemn women’s soccer as corrupting and satanic and warn that running and jumping can damage a woman’s hymen and ruin her chances of getting married.