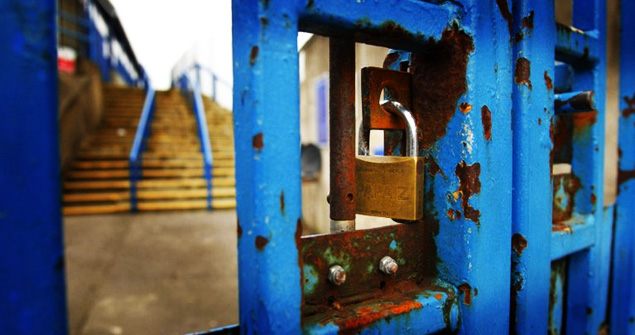 A succession of Middle East owners led Portsmouth FC to the abyss.

Supporters of Leeds United have welcomed a Middle East bid to acquire their troubled English soccer club with no clarity about who the real buyer is.

The Leeds United Supporters Trust described the announcement by the Bahrain-based Gulf Finance House in a letter to the island nation’s stock exchange that one of its subsidiaries, GFH Capital Limited, had agreed to “lead and arrange the acquisition of Leeds City Holdings,” the parent company of Leeds United, as “great news.”

Trust chairman Garry Cooper said Leeds fans were “hoping for investment in the team and for Leeds United to be glorious again.” He noted that a return of the club to the Premier League after it was relegated in 2007 to England’s second division as a result of its financial problems would reap its new owners profits from Leeds United’s share in the GBP 3.2 billion in broadcast revenues.

The risk is however that GFH because of a confidentiality clause declined to reveal on behalf of which Middle Eastern investor it was acting. Middle Eastern investment in European soccer has proven to be a mixed blessing with some clubs such as Manchester City rising from the doldrums to win the Premier League and Paris St. Germain beneftting and pushing ahead in performance and others like Servette FC, Malaga SC and Portsmouth FC struggling with the fallout of investors failing to live up to expectations.

As a result, the key question for Leeds supporters should be who is the investor and what is the purpose of the acquisition; those are questions that have yet to be answered.

For its part, Portsmouth, financially bankrupt and relegated from the premier to the third league after two acquisitions by different Arab owners with little real interest in the club, is currently facing the question whether it wishes to give Middle East investors a third chance.

GFH itself, an Islamic investment bank, has struggled financially in recent years. It agreed in May with creditors on a plan to restructure $110 million debt.

The difference between a Middle Eastern soccer investment that pays off and one that can deepen problems appears to be whether the investor is institutional or a member of a Gulf royal family with a strategic interest in the acquisition or a businessman operating on his own.

GFH is believed to have been engaged by private investors rather than one of the region’s sovereign wealth funds involved in the more successful European soccer acquisitions.

To be fair, the successful acquisition of Manchester City by Sheikh Mansour bin Zayed bin Sultan Al Nahyan, a member of the Abu Dhabi royal families who sits on the board of several of the emirate’s key economic entities, was initially fronted by United Arab Emirates billionaire businessman Sulaiman al-Fahim. Similarly, PSG was purchased by the Qatar Sport Investment, the Gulf state’s premier sport investment vehicle.

These soccer investments by Qatar and the UAE serve to increase the small Gulf states’ international prestige, enable them to punch internationally above their weight, build sports as an economic sector that enhances tourism and makes them key nodes in the world’s sports infrastructure and provides leverage for further business opportunities. Qatar moreover has identified sports as a key pillar of a national identity it is trying to forge. The strategy is long-term and is reflected in the two states’ approach towards their sport investments.

However, Mr. Al Fahim’s subsequent acquisition of Portsmouth sent the struggling club off the deep end. The businessmen acquired Portsmouth in April 2009 after he had pushed aside by the Abu Dhabi royals. He defeated a rival bid by the club’s CEO Peter Storrie, who was backed by Saudi property tycoon Ali Al-Faraj. Barely five months later, Mr. Al-Fahim sold 90 per cent of his stake to Mr. Al-Faraj whose equally brief reign effectively put the company definitively on the road to humiliation and administration.

Like Portsmouth, Malaga is experiencing the travails of a businessman who has taken on more than he has wanted or is able to bite even if it is in better shape than the English club. Malaga went through a high acquiring numerous players after it was independently acquired in 2010 by Sheikh Abdullah Al-Thani, a member of the Qatari royal family. The acquisitions helped the club qualify for the Champions League for the first time in their history.

The writing was nonetheless on the wall when soon after its qualification when players initially were not paid and the club was forced to start selling some of its most valuable assets. With a debt of 90 million euros, Malaga too could be relegated and may have to forfeit competing in the Champions League.

Geneva’s Swiss Super League club Servette FC and Austria’s Admira Wacker haven’t fared much better. Servette is on the brink of collapse after Iranian businessman Majid Pishyar who acquired it in 2008. It filed for bankruptcy earlier this year. Mr. Pishyar, who managed the club on a shoe string, tried unsuccessfully to attract government funding by last year appointing Robert Hensler, a former top civil servant for the canton of Geneva, as vice-president. His earlier efforts to salvage Admira, his first European acquisition, failed too. Servette’s problems come on the heels of the bankruptcy in January of Neuchatel’s Super League team Xamax whose Chechen owner was arrested on charges of fraud and financial mismanagement.