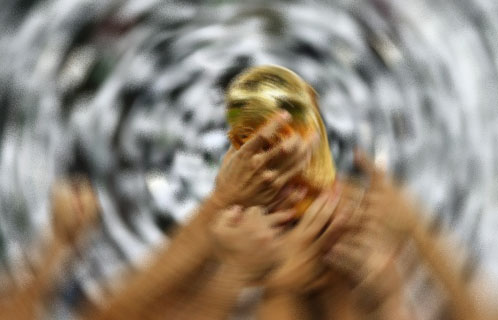 If there is a lesson in all eight Middle Eastern teams being knocked out of the Asia Cup, it is that they need to stop judging their coaches on the principle of ‘you are as good as your team’s last victory.’

Frenchman Bruno Metsu has led Qatar’s national team to its best performance ever in an international tournament, proving that the tiny Gulf state can hold its own on the pitch. Contrary to expectations, Qatar made it to the quarterfinals, narrowly being knocked out of the tournament by a 3:2 defeat by Japan.

“We wanted to show Asia and the world that we have a good team and we succeeded in that. “I am happy with the performance of the entire team and the coach. They gave their best,” said Qatar Football Association (QFA) President Sheikh Hamad bin Khalifa bin Ahmed al Thani after Qatar’s loss.

Yet, Metsu’s job is on the line the line when the QFA meets this week to evaluate Qatar’s performance in the Asia Cup. Al Thani’s comments notwithstanding, Qatari newspapers are quoting QFA officials as saying that Metsu, who with his appointment in 2008 has lasted longer than many coaches in the Middle East, may find it difficult to hold on to his job.

To be fair, the QFA prides itself on distinguishing itself on being deliberate and cautious in its personnel decisions. “The QFA is unlike a federation that has hired and fired 28 coaches in the last 20 years,” a QFA executive said in a swipe against Saudi Arabia, which axed two coaches during this month’s Asian Cup alone.

Politics rather than patience is often at the core of the Middle East’s high turnover of national soccer coaches. In a soccer-crazy world of authoritarian regimes, football offers one of society’s few release valves. With soccer associations largely controlled by those regimes, soccer often serves as a barometer for the stock of regimes who as events in Tunisia show already have low credibility. Government control aims to prevent soccer from providing an alternative space for anti-government protest.

“If the gulf between the East and the West, the North and South in Asia has to be bridged, it is important for federations here to disband their hire and fire policies and adopt a more patient approach, one that looks into the future and considers the long-term goals of each nation,” says soccer writer Duane Fonseca in a commentary in Sport 360.

The Arab world’s short term results-oriented approach to soccer undermines the ability of national teams to develop a successful style of their own that works and produces a degree of pressure and uncertainty among coaches and players that is bound to result in failure.

That trend is likely to be reconfirmed in the coming months as loosing Asia Cup Arab teams decide the fate of their coaches. The Slovenian coach Srecko Katanec of the national team of the UAE, which was a disappointment in Doha, is likely to be back on the job market by June when his contract is up for renewal.

“Football is a progression, you reap what you sow and sometimes patience is key,” Fonseca says. “When the (Asia Cup) final is played out on January 29, the side that lifts the trophy will demonstrate just that!”