Kick It: Women’s Football On the Rise in Kingdom 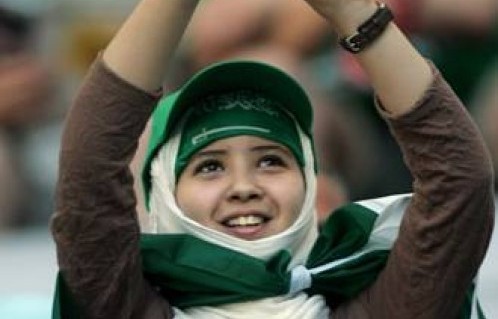 Shaima Sabri, 12, dreams of the day when she plays football on a stadium field of green grass with her father and brothers in a crowd of thousands cheering her on to victory.

On the first day of Ramadan after Maghreb prayer, Shaima was running barefoot through a hardscrabble patch of dirt off Madinah Road in Jeddah. Playing with the neighborhood kids, she was kicking a frayed football. Her dreams at that moment of playing before thousands were as elusive as the sweeping green fields that she hopes to play on.

“Some day I will play like Salem Aldawsari with Saudia,” said Shaima, referring to one of Saudi Arabia’s leading footballers. “But sometimes I think this is as far as I will get.”

Yet Shaima, and girls and women like her, have an unlikely ally in helping them organize football leagues: the men’s Saudi Arabian Football Federation.

Ahmad Eid Al-Harbi, vice president of the Player Status Committee for the Saudi Arabian Football Federation, which plays under FIFA, has been quietly visiting university campuses to help women develop football teams. Al-Harbi said meetings have included consultations on how to negotiate with the international football unions from Germany, Brazil, the United States and the United Kingdom in order to help women qualify for trainer positions. The Federation has also developed a physical education curriculum for women’s university campuses.

“Three weeks ago I visited CBA (College of Business Administration) University in Jeddah and we had long conversations with officials there with regard to women’s sports,” Al-Harbi told The Media Line. “We formed a group of women who are willing to play basketball and volleyball. We also convinced another group of women to form a football team. Now, they are considering organizing a league among all women’s universities in the region as a step towards participating in the Olympics Games.” At least seven Arab countries presently have women’s football teams.

The meetings mark the first acknowledgement from a sanctioned Saudi sports body that women could someday compete in the Olympics Games. Competing in the Olympics is a tantalizing goal for women athletes who believe that Saudi society might never recognize that women should have equal footing with men in sports. In the past two years, young Saudi women decided that they could no longer wait for government permission and funding to start their own football league. Instead, they organized their own teams and paid trainers out of their own pockets to develop competitive teams. One such team is the fledgling all-women’s Kings United Football Club in Jeddah.

Al-Harbi cautioned that although he wants to see women on the playing field, the road to government-funded leagues still is fraught with many obstacles.

“Saudi Arabia is a tribal society that doesn’t believe in speedy change,” Al-Harbi said. “However, I believe there is a quite sizable number of the society that is ready to accept women social sports that contribute to women’s good health and her main role in the family as a leader. When it comes to competitive sports, this needs quite longer time to be accepted.”

Although Prince Alwaleed Bin Talal joins Al-Harbi in supporting the right of women to play football, Al-Harbi characterized the atmosphere in Saudi Arabia as “hostile” to competitive women’s sports. “I’m all for [women’s football leagues] if we prepare the right atmosphere for such participation. We need to build a very strong infrastructure and we need human resources. Above all, we need to prepare the social atmosphere to accept such competitions to make it friendlier than it is now,” he said.

Indeed, Rima Abdullah, the founder of Kings United, told the Dubai-based Al-Arabyia TV last month that she has been criticized for organizing her football team.

“As for society as a whole, when we first appeared in public, we were attacked,” Abdullah said. “One of the most vehement attacks against me was during a Friday sermon. The entire sermon was about Rima Abdullah, as if I were pushing Saudi women towards promiscuity, or something.”

Kings United began playing in secret around Jeddah in 2005. The team rented secluded football fields to keep away the curious. Players paid their own expenses. Each player must have written permission from a male guardian to participate. The team then initiated a publicity campaign to drum up support. Last year, the team sought to participate in a women’s tournament in Bahrain that included teams from Oman and Kuwait. The Saudi team did not receive permission to play because FIFA and the Saudi Arabian Football Federation do not formally recognize the team.

Al-Harbi advised patience. “One should first work on providing suitable places such as playgrounds or stadiums that are specially equipped for women in our segregated society,” he said. “Second, women’s organized leagues should be operated under a very strong umbrella that protects women and the ultimate goals of which leagues are formed. I suggest it should be at least as a first step operated under Ministry of Education. It should also follow the Islamic regulations so it doesn’t upset the religious authorities.”

And there-in lies the obstacle. Religious conservatives have not only railed against women’s sports leagues as unseemly and undignified activities, but as a threat to players’ virginity. As perhaps the leading voice in domestic matters, religious leaders hold considerable sway over what is permissible and what is forbidden in Saudi society. Earlier this year, clerics demanded the resignation of the dean at the all-women’s Princess Noor University for Women in Riyadh for implementing a physical education program.

A 2009 Al-Riyadh newspaper survey of 2,250 Saudis reported that only 4 percent opposed female physical education. But Saudi Grand Mufti Sheik Abdul Aziz Al-Asheik told Al Eqtisadiah TV that, “Women should be housewives. There is no need for them to engage in sports.”

Kings United has been careful not to rock the boat. Players wear the hijab, sleeveless jerseys and shorts at mid-thigh in front of all-female crowds, but long white clothes and the hijab that complies with Sharia, or Islamic law, for male audiences.

Jeddah-based blogger Susie’s Big Adventure, who prefers to be identified only as Susie and writes extensively on Saudi women’s health issues, told The Media Line that physical education and participating in organized sports can improve Saudi women’s health. The Salman Medical Center at King Fahd Health City in Riyadh reported last year that half of the Saudi women between the ages of 30 and 45 suffer from obesity.

“If Muslim men truly cared about the health of Muslim women, they would encourage and support physical activities for women,” Susie said.

The good news is that government funding for women’s leagues may be more than just wishful thinking with the backing of the Saudi Arabian Football Federation. The bad news is that it might not be what women footballers want.

Al-Harbi noted that women’s groups should receive government-funding equal to men, but money should first be allocated for physical education or “soft” sports, such as basketball and gymnastics, as a means to integrate Saudi women into competitive international sports.

However, as for a FIFA-approved Saudi women’s team like the Iranian Football Federation, Al-Harbi doesn’t see a quick solution. “Saudi society is a very conservative one, even when it comes to men’s clubs. No one can imagine his daughter playing in front of thousands of people wearing shorts, such as in football.”