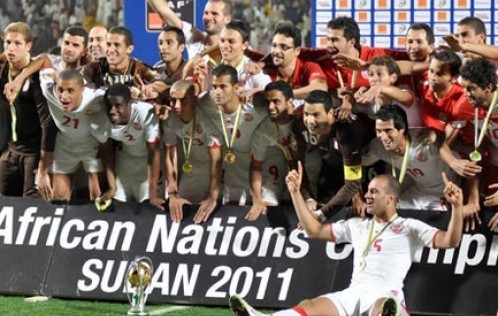 Protest is good for soccer. It enhances performance despite the hardship of civil strife according to an analysis of the performance of six North African national soccer teams before and after pro-longed mass protests that demanded regime change in their countries.

Matthew Barrett, a sports sponsorship professional, concluded in an analysis published on FootballSpeak.com that Tunisia, Libya, Sudan, Morocco and Algeria, five nations that experienced political upheaval in 2011, had performed significantly better in terms of average points per match following the protests or in Sudan’s case, the cessation of South Sudan, compared to 2010, the year before the unrest. Egypt, which won the African Cup three times in row, but failed to qualify for the 2012 finals was the exception that confirmed the rule.

The six national teams, Mr. Barrett, calculated, played 53 matches since the series of Arab uprisings erupted in Tunisia a year ago, in which they scored 87 goals with an average of 1.64 goals per match and won 45% of all games played. By comparison, the same teams played 60 matches in the year before the revolts in which they scored 79 points with an average of 1.32 per game and won 33% of the games played.

The teams performed better even though professional soccer was suspended for months in several countries, including Libya, Egypt, Tunisia and Algeria during the protests in a bid to prevent the soccer pitch from becoming an opposition rallying point. The enhanced performance occurred further against the backdrop of a rift in various countries between fans, who played key roles in the protests, and a majority of players who opted to either remain aloof, and not take sides or in some cases to come out in support of the embattled autocrat.

The improvement in performance constitutes an apparent triumph of national identity over internalized neo-patriarchism, which characterizes Arab autocracies and means that players and managers more often than not identified with the autocratic leader as a father figure. It also highlights the debilitating effect that politically motivated autocratic interference in the game had on performance.

Libyan goalkeeper Samir Aboud suggested that enhanced performance was the result of post-revolt national teams having a sense of truly playing for their country rather than their ruler when he said after a draw against Zambia that allowed Libya to progress towards the 2012 African Cup finals that “this is for all Libyans, for our revolution.” Libya’s Brazilian coach, Marcos Paqueta, added that his squad was “not only playing for football success but for a new government and a new country”.

Nabil Maalouf, coach of Esperance Sportive de Tunis, which this year won the African Champions League, noted that “the events at home really stimulated our team and we believe that the players felt greatly liberated after what happened.” Defender Khalil Chammam concluded that “one positive thing from the revolution was that, although we suffered a lot, those changes and the suffering made us stronger -mentally and physically.”

The triumph of national identity over neo-patriarchism symbolized by the post-Qaddafi Libyan team flying the pre-Qaddafi Libyan flag and singing a new national anthem enabled Libya to remain undefeated in competitive matches since the country’s autocratic leader, Moammar Qaddafi, was toppled earlier this year. That is no mean fete for a team that was dominated for years by Al Saadi al Qaddafi, the Libyan leader’s cruel and mercurial son with soccer ambitions of his own, who equated its success with that of his father’s regime and its failures as unacceptable poor reflections on the regime.

Interpol has issued an international arrest warrant for Saadi on charges of misappropriation of soccer funds and armed intimidation of players and officials who has sought refuge in neighboring Niger. In a separate case, Saadi is under investigation by Libyan authorities for the 2005 murder of an anti-Qaddafi player.

The impact of neo-patriarchism that turned players into celebrated figures who went victorious were showered with expensive gifts meant that the Libyan team meant was during the revolt increasingly split between supporters of Mr. Qaddafi and players who lost close ones among the NATO-backed rebel forces in the war against Qaddafi loyalists. The team’s captain denounced the rebels as dogs and rats, language used by Mr. Qaddafi to describe his opponents, while the goalkeeper and three other players defected together with 14 club players to the rebels four months into the rebellion.

The Libyan team’s rising star contrasts starkly with the fact that like Sudan it had barely ever registered on the radar of African soccer prior to the wave of protests that have swept the Middle East and North Africa in the past year and led to the overthrow of not only Mr. Qaddafi but also the leaders of Egypt, Tunisia and Yemen, far-reaching political reform in Morocco, continued unrest in Algeria and the carving out of an independent state of South Sudan.

The Algerian national squad, with anti-government protests moving this year from the streets back into the stadiums after having forced the government to lift the 19-year old state of emergency, won three of its five matches to emerge at the top of its group, according to Mr. Barrett, who calculated that it had scored 1.75 points per game as opposed to 1.25 last year. For its part, Sudan qualified as a runner-up in its group, achieving a 53 percent win ratio with 1.79 points per game as opposed to a 25 percent win ratio and 1.13 points per match a year earlier.

Egypt is the exception to the rule that autocratic interference diminishes and protest enhances performance. In the days of ousted President Hosni Mubarak, Egypt’s national team coached by the legendary Mubarak loyalist Hassan Shehahta won the African Cup three times in a row but this year failed for the first time in 29 years to qualify for the tournament’s finals.

There is no immediate explanation for why Egypt’s performance has been markedly weaker. Granted, Egypt’s transition from autocracy to a more open political system has been messy and bloody with soccer fans remaining engaged in bitter battles to force the country’s military rulers to relinquish power. Transition has however been messy in most countries with the exception of Tunisia, yet all have displayed performances beyond expectation.