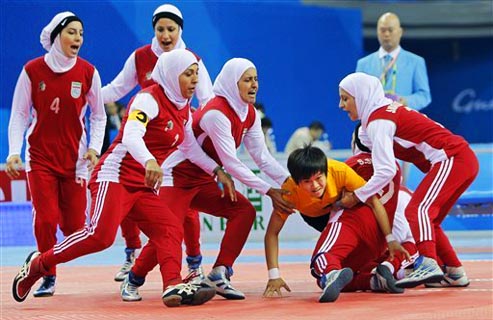 An investigation is underway regarding a shocking and controversial sporting competition that was held recently in Jeddah. Shocking? Yes – because the event was for females (for shame!) and the event organizers failed to obtain prior approval from the Ministry of Education. Which begs the question: Are male sporting events subject to the same restrictions? Somehow I doubt it.

The illegal and contentious sporting event – thought to be the first of its kind in the Kingdom – was held on December 8th at Effat University and included competition in such “unlady-like” sports such as swimming, basketball, and badminton for some 200 young high school women representing six different Jeddah girls’ schools.

In the aftermath of the tournament, a member of the Board of Directors of one of the participating schools claims they had received more than 60 “anonymous” complaints about girls participating in sports.

All this commotion comes at the heels of another report out of Iran where a Muslim cleric condemned women’s sports and forbade Iranian females from participating in the Asian Games. He was quoted as saying that women’s sports are a product of the West’s “dirty” culture and should be shunned. I want to know, exactly what is “dirty” about women’s sports?

This is 2010, almost 2011. It is common knowledge in this day and age that regular exercise promotes good health, weight control, and a sense of well-being. Yet for the girls and women of the kingdom, these facts don’t matter and aren’t considered important.

Last year I wrote about how the government cracked down on women’s gyms across Saudi Arabia, closing down countless women’s facilities if they were not properly licensed and if they were not affiliated with a hospital, while there are no such restrictions placed on men’s gyms. The closing of these facilities drove up membership costs and made it impossible for many Saudi women to be able to afford going to a gym. And it’s already hard enough for women to try to exercise in this country as it is. Women are forbidden from swimming (well they can, if they are fully covered), riding bicycles (too provocative as it reveals the female’s behind), or playing sports in public. Saudi Arabia has been long criticized for denying Saudi women from particpating in the Olympics and other sporting events.

Physical Education classes in girls’ schools are a very low priority. You won’t believe some of the ludicrous reasons given for why girls shouldn’t be allowed to participate in sports or exercise in school: The female hymen might break during exercise so the girl wouldn’t be considered a virgin anymore. “Good girls” would never disrobe outside their own home, not even to change into gym clothes at school. If girls did disrobe in front of other girls at school, they might get turned on and have nasty thoughts that they may want to act upon. I couldn’t make this stuff up if I tried!

All this craziness aside, women’s obesity is becoming a major health crisis here in Saudi Arabia, evident in the dramatic increases in diabetes, hypertension, depression, and other weight-related health issues. For the most part, women here lead a very sedentary lifestyle – many don’t even do any physical household chores because they have maids.

This antiquated mindset of restricting women from exercise and sports places Saudi Arabia way behind the times in promoting women’s health and well-being.

2 Responses to It’s Not “Lady-Like!” – Women’s Sport in Saudi