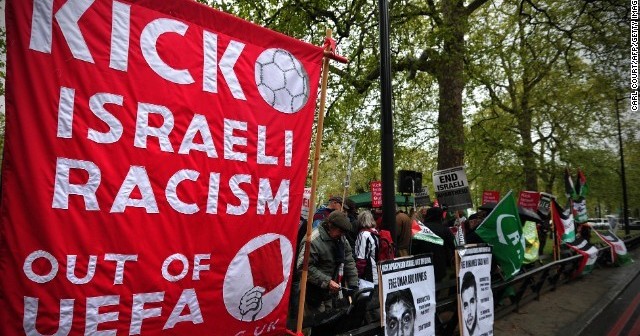 With Europe’s most talented young footballers having kicked-off of the under-21 championships on Wednesday, Israelis are celebrating the biggest footballing coup in their history.

The tournament, which opened with a match between Israel and Norway, is being broadcast to 140 countries. Some 170,000 tickets have been sold for the 15 matches, with thousands of fans arriving from England, Germany, the Netherlands and Italy, as well as European politicians and more than 100 scouts from the world’s top clubs.

But the decision to host the high-profile event in Israel has fuelled criticism of European football’s governing body, UEFA, from a coalition of global statesmen, Palestinian leaders, international footballers and human rights activists.

They have spent months pressuring UEFA officials to switch the tournament to another country, arguing that Israel’s occupation of Palestinian lands, and its record of undermining Palestinian sports, make it an unworthy venue for the championship.

“We find it shocking that [UEFA] shows total insensitivity to the blatant and entrenched discrimination inflicted on Palestinian sportsmen and women by Israel,” they wrote.

Avi Luzon, the head of the Israeli Football Association (IFA), appeared unfazed. He said this week that the under-21s would be a showcase for Israel to win other tournaments, such as the finals of the Europa League and the Champions League.

“I believe that this tournament will be our entry ticket into the European elite and that we will host many more top matches and tournaments here,” he told the Israeli media.

But a number of European players have expressed their opposition to such a prospect. Last November, in the immediate wake of an eight-day attack by Israel on Gaza that damaged several football grounds, more than 50 leading European players signed a protest letter to UEFA.

Chelsea’s Eden Hazard, Arsenal’s Abou Diaby and Paris Saint-Germain’s Jeremy Menez were among those who argued the tournament would be “seen as a reward for actions that are contrary to sporting values”.

Tutu’s voice, in particular, is likely to add a moral authority to the recent launch of a campaign by Palestinian groups and European and American solidarity activists for a sporting boycott of Israel, modelled on the international campaign that targeted South Africa from the 1960s until the fall of apartheid in 1994.

The move follows the growing success of a cultural and academic boycott initiated by Palestinian civil society in 2005.

Campaigning under the banner of “Boycott, Divestment and Sanctions” (BDS), the movement has sought to deter artists from performing in Israel and scholars from cooperating with Israeli academic institutions.

Now, as the UEFA tournament gets under way, Palestinian activists have begun championing an extension of the boycott to include sporting collaboration with Israel too.

Omar Barghouti, a leading BDS campaigner in the West Bank, said: “Until now we have been slow to focus on sports but, as the UEFA tournament proves, this is another issue that contributes to the feeling among Israelis that they are living in a ‘normal’ country even as they commit crimes against Palestinians.

“The sports boycott against South Africa had a powerful psychological impact on the white minority. It can have a similar effect on Israelis.”

Barghouti and others point to footballer Mahmoud Sarsak as an exemplar of the difficulties faced by Palestinian athletes under Israeli occupation. In recent months he has been travelling through European capitals lobbying UEFA to reverse its decision.

Sarsak’s promising career as a midfield player was cut short in 2009 when, aged 22, he was arrested by Israel as he tried to cross from Gaza into the West Bank to take part in a match.

Sarsak was held in administrative detention for three years accused of membership of the Islamic Jihad group, although he was never charged and his lawyers were denied access to the evidence against him. Such practices have been widely condemned by international human rights organisations.

He was finally freed last summer after a 92-day hunger strike.

“Israel works endlessly to repress Palestinian football, just like it does many other forms of Palestinian culture,” he said. “UEFA is legitimising Israel’s continued occupation, oppression and apartheid policies.”

The Palestinian team – which plays in the Asian league rather than in Europe, like Israel – was able to host international matches for the first time only in 2008, when a suitable stadium was built in Gaza.

Sarsak said that, a few months later, during the winter of 2008-09, Israel bombed it, along with the Gaza’s other major sporting facilities and the Palestinian Paralympic Committee building. The stadium was attacked again last year, shortly after it had been repaired.

Sarsak has also highlighted Israel’s detention of other leading footballers, including goalkeeper Omar Abu Rois and striker Muhammad Nimr, again without charges. Another striker, Zakaria Issa, jailed for 16 years, died of cancer last year, a few months after being released on humanitarian grounds.

Honey Thaljieh, captain of the Palestinian women’s team, echoed Sarsak’s criticisms of UEFA at a press conference in Doha in March, saying: “It’s very hard to understand why they [Israel] have been given such an honour.”

Sarsak’s campaign has helped to spur the rapid emergence of Red Card Israeli Racism groups across Europe, campaigning for a sports boycott of Israel.

The UK contingent staged a protest last week outside a London hotel, in which UEFA was holding its annual congress. The same day three activists evaded security measures to gatecrash a UEFA gala dinner.

Football’s elite, including the former England player David Beckham and Manchester United’s recently retired manager Sir Alex Ferguson, were reported to be “stunned” as the protesters managed to unfurl a Palestinian flag and denounced the decision to stage the under-21 tournament in Israel before being arrested.

Other groups have formed in the Netherlands, Italy, Belgium, Norway and Denmark.

Naomi Wimborne-Idrissi, a UK organiser, said the campaign for a sports boycott of Israel had helped to draw in anti-racism activists who had not previously had a connection to the Palestinian cause.

“It has been a great vehicle for recruiting new people and helping them understand how entrenched the racism is in Israel’s treatment of Palestinians,” she said.

The movement would now intensify its efforts to widen the boycott to other events.

“Every time Israeli teams play in Europe we will stage protests, shout slogans from the terraces, hand out leaflets, and wave banners,” said Wimborne-Idrissi. “Their appearances will give us the chance to let ordinary football fans know what Israel is doing to the Palestinians.”

She described as “hypocritical” the decision last week by UEFA, and its global parent body FIFA, to agree to stricter rules against racism in football while offering a welcome to Israel.

According to the new FIFA regulations, players found to have engaged in racist abuse will be banned for five matches, while offending teams face expulsion from competitions or relegation.

The anti-racism measures were announced as the FIFA congress rejected demands from Jibril Rajoub, president of the Palestinian Football Association, to sanction Israel for denying Palestinian players freedom of movement, and preventing them from attending international matches. Rajoub also highlighted cases of foreign players being denied entry by Israel to play against the Palestinian team.

“Sanctions should be taken. Nobody has the right to act as a bully in the neighbourhood,” Rajoub told FIFA delegates.

Sepp Blatter, the head of FIFA, agreed to add the occupied territories to his tour of the Middle East in July to hear about the problems faced by Palestinian players.

Israel has attracted criticism over racism on the terraces inside Israel too. The issue exploded on to front pages earlier this year when one of the country’s top clubs, Beitar Jerusalem, signed two Muslim players from Chechnya.

The team had previously prided itself on never having hired an Arab or Muslim player, despite a fifth of Israel’s population being of Palestinian descent. Cries of “Deaths to the Arabs!” and “Muhammad is dead!” are commonplace at its matches.

The Chechen players are reported to have declined to play another season in Israel after fans greeted them with a torrent of abuse and unfurled a large banner declaring “Beitar: pure forever”. The clubhouse was also burnt down in suspicious circumstances.

Neither Israel’s culture and sports ministry nor the IFA were available to comment on the criticisms levelled by Tutu and the BDS activists.

However, Yair Galily, an Israeli academic who heads the IFA’s research unit, defended UEFA’s decision to select Israel for the under-21 tournament. “Football can be used to build bridges between Israeli and Palestinian football. The game is a great vehicle for encouraging reconciliation.”

Last month UEFA’s general secretary, Gianni Infantino, said his organisation and the IFA “cannot be held responsible for the politics of a national government”.