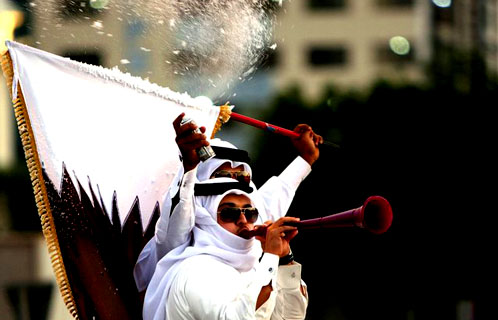 Spain is rapidly emerging as a model for the offsets Qatar, Dubai and other energy-rich Gulf states hope to reap from their massive investments in professional sports in a bid to position themselves as global players.

Qatar may not be able to recover the billions of dollars it is pouring into the hosting of the 2022 soccer World Cup, the world’s largest sporting event, from sponsorship, advertisement and spectator revenues, but its focus on the beautiful game is paying off handsomely in other ways.

Despite controversy over the integrity of the Gulf state’s World Cup bid and questions about its ability to shield players and fans from the region’s blistering summer heat, winning the right to host the tournament has contributed to putting tiny Qatar with a population of little more than a million on the world’s map.

Coupled with acquisitions of European soccer clubs, the World Cup is creating significant business opportunities not only in the infrastructure Qatar needs for the competition but also in home countries where it has established a stake in soccer. It further opens opportunities to bridge the cultural divide that has widened in the past year in the wake of 9/11 terror attacks on New York and Washington, the Bush administration’s war on terror and problems with minorities in Europe.

Qatar and the Gulf states see sports as a tool to enhance their prestige, enable them to punch above their weight international, create non-sport-related business opportunities and boost tourism.

Marbella head of tourism Jose Luis Hernandez told Bloomberg that the $14 million acquisition of the Malaga team was “creating a social profile in our country that opens doors.”

Sheikh Abdullah has been praised for his investment of $79 million in offseason signings including striker Ruud van Nistelrooy that outspend Real Madrid. He replaced bookmaker William Hill Plc as jersey sponsor because gambling is banned under Islamic law with  with United Nations agency UNESCO. Royal Emirates plans to set up a pavilion about Arabic culture at Getafe’s stadium, Mr. Rafiq said.

Sheikh Butti is scheduled to lead a 50-man delegation to meet with Spanish entrepreneurs at a Getafe game later this month, Bloomberg quoted Royal Emirates Managing Director Kaiser Rafiq as saying in a telephone interview.

“This is a sort of football diplomacy. There are some opportunities taking place in Spain due to the economic situation,” Mr. Rafiq said.

Mr. Rafiq said that Royal Emirates was also looking at financing a spa resort based on a former Arab settlement near Granada, Wadi Ash. Granada was Muslim-controlled when Spain was ruled by Muslims from 711 until the inquisition in 1492.

“The Arabs have very close ties to Spain and we feel that is a connection that should be evolved back again,” Bloomberg quoted Mr., Rafiq as saying. He added that his was also interested in solar-energy and pharmaceutical deals.