Gadaffi Son a Study in using Sport for Politics 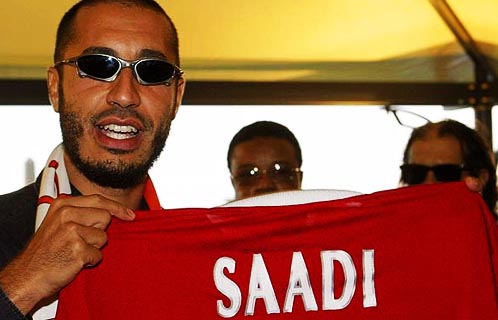 Saadi Gadaffi signed for Italian Serie A team Perugia in 2003, playing only one match before failing a drug test. He was formerly on the board of the Italian team Juventus, of which 7.5 % is owned by a Libyan consortium, but stepped down to join Perugia.

Libyan leader Col. Moammar Gadaffi’s controversial soccer-playing son, Saadi, offers a study in the use of soccer by authoritarian Arab regimes to distract attention from economic and political problems and of the embattled Libyan dictator’s divide and rule approach to governance.

Described by a 2009 US diplomatic cable disclosed by Wikileaks as “notoriously ill-behaved,” Saadi, a former board member of Italian soccer club Juventus FC, is a leader of his father’s brutal crackdown on anti-government protesters seeking an end to Gadaffi’s 41-year rule.The protests are the latest in a wave of anti-government demonstrations sweeping the Middle East and North Africa that has already toppled two leaders, Egyptian President Hosni Mubarak and Tunisian President Zine Abedine Ben Ali.

Saadi last week reportedly joined his brother Khamis, a Russian-trained elite special forces commander, and military intelligence chief Abdullah al-Senussi in an effort to wrest control of Benghazi, Libya’s second largest city, from protesters who control the city. Hundreds are reported to have died in Benghazi. Saadi’s father vowed on Tuesday to fight his opponents to the last drop of his blood.

Benghazi is familiar ground for Saadi. Benghazi, long seen as a stronghold of anti-Gadaffi sentiment, saw the fortunes of its soccer team, Al Ahli Benghazi tumble a decade ago on an and off the field when Saadi captained its Tripoli namesake and arch rival Al Ahli, a team in which the Gadaffi prodigy owns a majority stake. Al Ahli means in Arabic ‘The National’.

Al Ahli Tripoli supporters together with fans of its Tripoli nemesis Al Ettihad demonstrated in Tripoli’s Green Square last week chanted “God, Libya and Moammar only” as Saadi toured the square on the roof of a car, waving and shaking hands.

In a country in which the mosque and the soccer pitch were the only release valves for pent-up anger and frustration prior to this month’s protests, Saadi’s association with Al Ahli meant that the prestige of the regime was on the line whenever the team played. As a result, soccer was as much a political match as it was a sports competition in which politics rather than performance often dictated the outcome.

Journalist and author Brian Whitacker describes a match in the summer of 2000 in which Al Ahli Benghazi had a 1:0 lead on Al Ahli Tripoli in the first half, “but in the second half the referee helpfully imposed two penalties against it and allowed al-Ahli Tripoli an offside goal.” Benghazi’s players walked off the pitch but were ordered to return by Saadi’s guards and Tripoli won 3-1.

Whitacker recalls a July 20, 2000 game that Al Ahli Benghazi played against a team from Al-Baydah, the home town of Saadi’s mother and the place where the first anti-Gadaffi demonstrations against corruption in public housing were staged last month. Benghazi fans were so outraged by a penalty that they invaded the pitch, forcing the game to be abandoned.

Off the pitch, the angry fans set fire to the local branch of the Libyan Football Federation headed by Saadi. In response, the government dissolved the Benghazi club, demolished its headquarters and arrested 50 of its fans. Public outrage over the retaliation against Benghazi forced Saadi to resign as head of the federation, only to be reinstated by his father in response to the federation’s alleged claim that it needed Gadaffi’s son as its leader.