World Cup Qualifier Comes At A ‘Volatile Moment’ in Iran 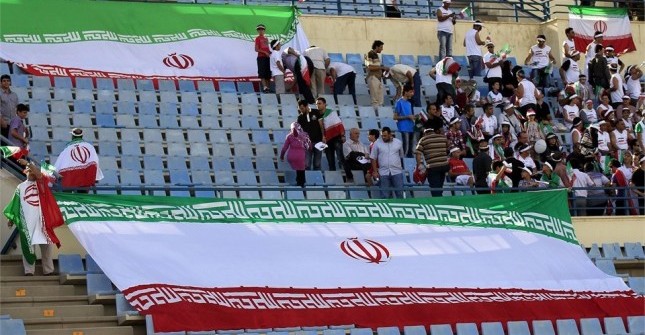 With three days left in the run-up to Iran’ presidential election, Supreme Leader Sayed Ali Khamenei has more to worry about than ensuring that a sufficiently malleable candidate emerges as winner. A crucial victory today in Iran’s 2014 World Cup qualifier could bring thousands into the streets in celebrations that have in the past turned into anti-government protests.

The risks mount if none of the eight presidential candidates wins 50 percent. A second round on June 21 would follow on the heels of the Iranian national team’s final qualifier against South Korea on June 18. An Iranian victory in that game would provide Iranians two opportunities to celebrate: on match day and when the victorious team returns to Tehran shortly thereafter.

If the past is any yardstick, World Cup soccer victories are volatile moments in Iran. This time round, a soccer victory could prove to be particularly volatile. Discontent in the Islamic republic is bubbling at the service. While the elections as a result of the disqualification of former president Ali Akbar Rafsanjani, who is seen as a reformer, are less likely to provoke mass protests as they did in 2009 against a poll that was perceived to have fraudulently returned President Mahmoud Ahmadinejad to a second term in office, soccer could provide the spark.

The strength of a desire for change among a significant segment of the public is reflected in the emergence of Hassan Rohani, a cleric who was Iran’s chief nuclear negotiator in the early 2000s, as a reformer and potential frontrunner. The importance of sports in general and soccer in particular is highlighted by the fact that political interference has become an important theme in the election campaign.

Presidential candidate and former foreign minister Ali Akbar Velayati vowed in one of three televised debates among the candidates that he would ensure that sports management is shielded from interference by the government and the Revolutionary Guards by returning it to professionals. By the same token, Tehran Mayor Mohammad Baker Qalibaf, widely viewed as a conservative, prepared for his candidacy by using his municipality and its bank to sponsor clubs.

Mr. Qalibaf’s move is in line with the growing influence of the Revolutionary Guards and other security officials in the management of the country’s major soccer clubs by either taking over ownership or ensuring that they play an influential role in management. This includes clubs like Persepolis, Iran’s most popular club that has its roots in the left and historically catered to Iran’s lower social classes, and Traktor Sazi. Based in Tabriz, the capital of the predominantly Azeri province of Eastern Azerbaijan, Traktor Sazi has emerged as a symbol of an Azeri national identity. Its stadium has been the scene of environmental and nationalist protests in recent years.

The potential of World Cup qualifiers to create opportunity for protest in Iran was demonstrated in 1997, 1998, 2002 and 2006. When Iran’s 1997 victory against Australia qualified it for the first time in two decades for the World Cup finals, public celebrations quickly turned into protests. They erupted barely a month after the election of Mohammed Khatami as president held out the promise of a less restricted society. Men and women honked their car horns, waved Iranian flags and danced in the streets together to blacklisted music and sang nationalist songs as they did six months later when Iran defeated the United States. Some chanted, “Death to the Mullahs.”  Some 5,000 women stormed Teheran’s Azadi stadium where the team was being welcomed in protest against their banning from attending soccer matches in defiance of calls in the media for them to watch the ceremony on television at home.

Bahrain’s defeat of Iran four years later in a World Cup qualifier sparked mass protests against a backdrop of mounting disappointment with Mr. Khatami’s failure to implement change. Shouting anti-government slogans, soccer fans attacked banks and public offices and clashed with security forces. Khatami’s younger brother, the then deputy speaker of parliament, warned that the protests reflected popular frustration with unemployment and low standards of living and a rejection of the regime’s “excessive interference in people’s private lives.”  The protests ignited heated debate in parliament and on the pitch about where the Islamic republic was heading.

Like in 1998, women celebrated soccer victories in 2002 and 2006 by discarding their veils and mixing with the opposite sex. When Iran’s chances were dashed by Bahrain, rumors abounded that the match had been fixed to ensure a loss so that people would not take to the street. Journalist Nicole Byrne, who attended a match against Ireland in Tehran’s Azadi Stadium days after Iran’s loss reported that “under an enormous mural of the late Ayatollah Khomeini, Iranians ripped out and set fire to seats, tore down banners depicting images of the country’s senior mullahs and trashed the windscreens of several hundred cars outside.”

An Iranian sports journalist notes that “in terms of freedom of expression, soccer stadiums are nearly as important as the Internet in Iran now. The protest is more secure there because the police can’t arrest thousands of people at once. State television broadcasts many matches live and the people use it as a stage for resistance. They’re showing banners to the cameras and chanting protest songs, which is why some games are broadcast without sound now.”

Mr. Ahmadinejad, a player and fan, who was at the forefront of increased Revolutionary Guard influence in soccer in a bid to use soccer’s popularity to enhance his image, visited the Iranian national team in advance of the match against Lebanon. Unable to run for a third term and having failed to position a presidential candidate close to him, Mr. Ahmadinejad is concerned about his legacy and the possibility of charges of corruption and economic mismanagement once he no longer enjoys immunity.

Lebanon’s national team coach, German-born Theo Buecker, holds out little hope for Mr. Khamenei’s ability to avoid potential soccer-related protest. He notes that Iran has to win on Tuesday. The match “is not important for us,” he says, adding that he is not able to field some of his top players because they were suspended in a match-fixing scandal. That raises the likelihood of celebrations and increases the risk of protests on the eve of the presidential election.