FIFA Needs a “Day of Rage” to Restore Faith 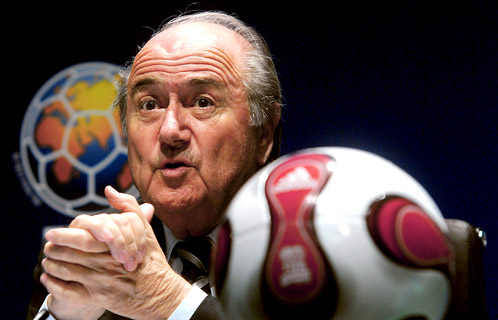 I have just watched an excerpt from Sepp Blatter’s press conference in which he commented on recent allegations of corruption within football’s ruling body.

Blatter adopted his usual persona of an arrogant international statesman. He referred to FIFA as a family – his family. He was adamant that FIFA is not in crisis, and confident that all allegations of corruption could be resolved by FIFA internally. The BBC’s report on Blatter’s press conference is here.

Blatter leads a team of preening, self-satisfied and allegedly corrupt politicians and bureaucrats. Millions of people play the game. Billions follow it. The money generated by football is greater than the gross domestic product of some nations. Many of us care passionately about the game – not as much, quite possibly, as we care about our families and our nations. But FIFA is more than a family. Families are accountable only to themselves provided that their members do not break the law. The football community is a virtual nation, and football’s governing body should be as accountable as a real government.

At a time when accusations are swirling around about the integrity of FIFA’s potentates, not just now, but over a period of years – see my previous post about FIFA from last November –  it is not enough that investigations into corruption should be the province of an internal ethics committee. Whether or not Blatter is correctly following FIFA’s rules and constitution by insisting on an internal inquiry is as irrelevant as the supposedly legal actions of the deposed despots of the Middle East in shoring up their power.

At the very least, he should postpone the presidential election and call on an independent forensic team to carry out a thorough investigation into the behaviour of FIFA’s officials, with powers to seize documents and examine electronic records. If it finds sufficient evidence of corruption, the team should be empowered to refer cases to criminal prosecutors in countries where any alleged acts were carried out. Only then can the negative perceptions surrounding FIFA be laid to rest.

For Qatar, which is preparing to spend billions in hosting the 2022 World Cup, such a process is essential if it is to gain the full benefit of its investment and see its finest hour take place untainted by rumour and innuendo. It is the least that millions of young Qataris, waiting with excitement for their moment, deserve.

As his formerly loyal colleagues turn on each other like rats in a cage, and Blatter lectures us like Hosni Mubarak in his final days of power, perhaps FIFA needs a day of rage.  A virtual nation doesn’t have real Tahrir Squares where protesters can gather, but a few million votes on a Facebook page might go some way towards convincing the complacent Mr Blatter that after thirteen years, enough is enough. Assuming he’s listening, of course.