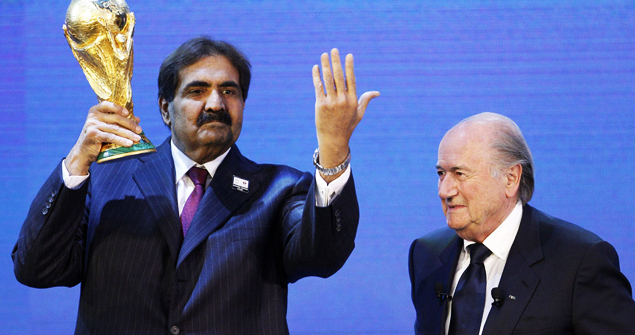 World soccer body FIFA moved closer to investigating its controversial awarding to Qatar of the 2022 World Cup hosting rights with the appointment of two prominent crime fighters mandated to look into past allegations of corruption.

Speaking at a news conference in Zurich, FIFA president Sepp Blatter said that Michael J. Garcia, a former US attorney for the Southern District of New York, which handles high profile white collar fraud, international terrorism and national security cases, would have a free hand in choosing his investigations.

The appointment of Mr. Garcia as head of the soccer body’s investigatory committee and German penal court judge Hans-Joachim Eckert as head of its judicial chamber marks a milestone following two years of repeated scandals that together constitute the worst crisis in the soccer body’s 108 year-old history. The scandals were not exclusively related to Qatar, but often involved either the Gulf state or Mohammed Bin Hammam, a disgraced Qatari national who until last year was vice president of FIFA and president of the Asian Football Confederation (AFC).

Swiss court documents in a case unrelated to Qatar revealed as late as last week that Mr. Blatter’s predecessor Joao Havelange and Brazilian Football Association boss Ricardo Teixeira had received millions of dollars in kickbacks from FIFA’s collapsed marketing partner ISL. Mr. Blatter said the documents would be handed over to Mr. Garcia.

The appointment of Messrs. Garcia and Eckert at the very least means that allegations of Qatari wrongdoing are likely to resurface despite the Gulf state having so far successfully denied charges of  illegal payments, unethical favours to FIFA executive committee members and allegations that Qatar, Spain and Portugal had violated bid rules by agreeing to swap voted.

The core of the allegations of Qatari bribery collapsed last year when a disgruntled employee of the Qatari bid committee admitted that she had fabricated documents and allegations that the Gulf state had paid two FIFA executive committee members $1.5 million to secure their support for its bid.

Focus on Qatar is however likely to be renewed in coming weeks with Mr. Bin Hammam becoming news again. The AFC announced on the eve of the appointment of Messrs. Garcia and Eckert that Mr. Bin Hammam had been suspended for 30 days  as the result of a year-long audit by Pricewaterhouse Coopers that revealed “infringements” in the “execution of certain contracts” and tampering with AFC bank accounts.”

Meanwhile, the Court of Arbitration for Sport (CAS) in Lausanne, Switzerland, is expected to rule next week on Mr. Bin Hammam’s appeal against his banning for life by FIFA from involvement in soccer on the grounds that he last year tried to buy the votes of Caribbean soccer officials in a bid to defeat Mr. Blatter in FIFA presidential elections.

Qatar has in the past year sought to distance itself from Mr. Bin Hammam arguing that he did not play a role in the Gulf state’s World Cup bid. That is likely to be put to the test by Messrs. Garcia and Eckert given Mr. Bin Hammam’s key position in world soccer and his close ties to Qatari emir Sheikh Hamad bin Khalifa Al Thani.

Few doubt that Mr. Bin Hammam would have been aware of the fact that Qatar and Spain and Portugal had colluded to trade votes in the World Cup bids. Spain and Portugal lost their joint bid for the 2018 World Cup to Russia. Mr. Blatter last year confirmed the collusion but played it down on the grounds that it had not helped either of the two bidders.

Qatari officials have at times with reason dismissed allegations about their bid as sour grapes on the part of failed bidders, including the United States, Australia and England, who had far less funds for their bid campaigns at their disposal. Qatar nonetheless has never revealed its budget for the bid nor has it publicly addressed in any serious fashion pledges it allegedly made for soccer-related investments in the home countries of some FIFA executive committee members in an effort to influence their vote. Such investments are legal under the FIFA bidding rules but raise ethical questions.

Speaking at a conference in London last year, Qatar 2022 secretary general Hassan al-Thawadi insisted that Qatar had conducted its bid to the ”highest ethical and moral standards.” He portrayed the Gulf state as the victim of a campaign in which ”baseless accusations were made against our bid. We were presumed guilty before innocent without a shred of evidence being provided,” Mr. Al-Thawadi said.

A FIFA investigation of Qatar’s bid is likely to make the Gulf state more vulnerable to pressure from the international labour movement to adhere to global standards. With Qataris accounting for an estimated 25 per cent of the population, Qatar is expected to import up to a million workers to build the infrastructure needed for the World Cup. The International Trade Union Confederation (ITUC) has threatened to launch a global boycott campaign if Qatar fails to recognize workers’ rights to collective bargaining, freedom of movement and independent union representation.