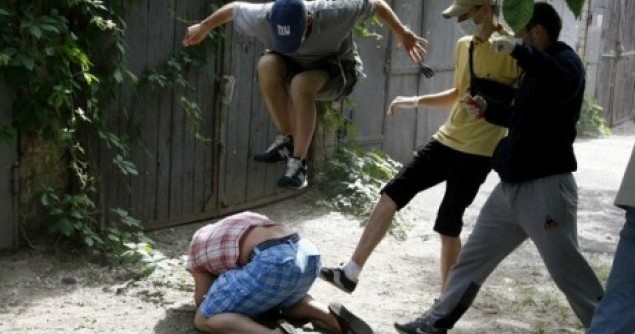 Many attention-grabbing headlines have emerged from Euro 2012 thus far. Few have had to do with the football. Similarly, rather than the ball crashing into the back of the net or a player launching himself into a full-blooded block of an opponent’s shot, to my mind, it is the picture above that has been by far the most arresting image of the tournament thus far.

After a few days of these headlines, I have drawn the preliminary conclusion from the available evidence that racism and homophobia are unfortunately still indelible in the Ukraine and Poland. I’m not drawing this conclusion from one story, one incident, or one documentary, but there seems to be a pathology of such incident thus far (and the tournament is only a few days old!) that means that my take-away conclusions are that, (1) it was ridiculous that this tournament was given to these countries, (2) I deeply don’t want to visit these places.

I stand ready to be corrected if anyone wants to point out that the eight or nine incidents thus far were merely…umm…coincidence, but either which way, I doubt very much whether this was the message Poland and the Ukraine wanted the world to see by hosting these tournaments.

Qatar in 2022 will have similar problems. No, I’m certainly not suggesting that Qataris will be attacking gay campaigners like in this photo or that Qataris will be at all rude, even, chanting offensive slogans or anything of this nature. But the message that Qatar wants to put across to the world by hosting this tournament will get filtered through the international media who will pick up on some decidedly non-football related stories and run with them.

In the Qatari context, perhaps it will be the police taking away a drunk fan? Or corralling a group of rowdy, intoxicated England fans back into whatever football-drinking pens have been established. Qataris will reply that such incidents take place at every tournament but are not so salaciously splashed across the headlines. They will be right, of course, but being right is not really enough. As a country I think that Qataris will need to develop a tough skin over the coming few years.

Many seemed to be wholly bewildered by the storm of criticism that rang out after they were awarded the World Cup. Much of this was, indeed, unfair but such is life. Hosting the largest sporting tournament on earth is going to put Qatar under the microscope like never before. Qatar and Qataris need to accept this – this is the Faustian bargain that they have made – and hire some PR people to deal with these incidents as and when they occur.