Equality on the Pitch: Women’s Football ‘on the Rise’ 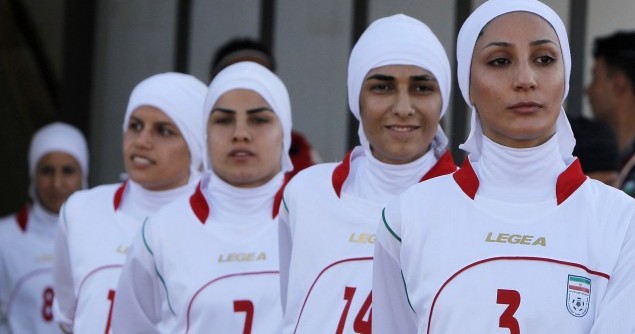 Middle Eastern soccer associations have launched a campaign to put women’s soccer on a par with men’s football in a region in which a woman’s right to play and pursue an athletic career remains controversial and at a time at which political Islam is on the rise.

The associations announced the campaign at the end of a two-day seminar in the Jordanian capital Amman organized by the West Asian Football Federation (WAFF) and the Asian Football Development Project (AFDP). Glaringly absent among the representatives of the 13 Middle Eastern WAFF members was Saudi Arabia where women’s soccer exists at best in a political and legal nether land as well as Yemen.

The campaign comes as women are demanding greater rights in a part of the world that has entered a period of dramatic political and social change. Popular revolts in the past two years have toppled the autocratic leaders of Tunisia, Egypt, Libya and Yemen, sparked a bloody civil war in Syria and prompted numerous other states to adopt policies designed to shield themselves against a wave of protest that is unlikely to leave any Middle Eastern nation untouched.

A statement at the end of the seminar chaired by FIFA Vice President and AFDP Chairman Prince Ali Bin Al Hussein defined “an athletic woman” as “an empowered woman who further empowers her community.” In a rebuttal of opposition to women’s soccer among some Islamists across the region and more conservative segments of Middle Eastern society the seminar stressed that women’s soccer did not demean cultural and traditional values.

In doing so, the associations backed by representatives of the United Nations, the Union of European Football Associations (UEFA), the Asian Football Confederation (AFC), and the English Football Association, put themselves at the forefront of efforts to secure equality and women’s rights. The seminar’s statement emphasized the right of women to play soccer irrespective of culture, religion and race; a women’s right to opt for soccer as a career rather than only as a sport; and soccer’s ability to promote gender equality and level the playing field on and off the pitch.

The statement called further for the appointment of women to the boards of WAFF member associations, establishment of a WAFF women’s committee, creation of Under-16 and Under-19 women competitions in the Middle East (West Asia) as well as the compulsory rotation of hosting of subsidized WAFF women competitions.

With Saudi Arabia unlikely to comply with the initiative, It was not immediately clear whether member associations who refused to participate would be sanctioned, and if so, how. The statement, however, singled out Saudi Arabia by explicitly stating that the kingdom would be included in women’s tournaments. The statement said it would kick start its campaign with a WAFF Girls Football Festival on International Women’s Day on March 8.

In campaigning for women’s rights, WAFF has its work cut out for it not only with regard to Saudi Arabia but also in relation to many of its members who did sign on to the focus on women. “Female athletes in the Middle East face pressures that include family, religion, politics, and culture,” said a recent study entitled ‘Muslim Female Athletes and the Hijab’ by Geoff Harkness, a sociologist at Northwestern University’s campus in Qatar, and one of his basketball playing students, Samira Islam.

Resistance to women’s sports is moreover not restricted to Muslims in the Middle East and North Africa. Palestine’s women soccer team includes 14 Christians and only four Muslims but a majority of the team has similar tales to tell about the obstacles they needed to overcome and the initial resistance they met from their families.

Human Rights Watch last year accused Saudi Arabia of kowtowing to assertions by the country’s powerful conservative Muslim clerics that female sports constitute “steps of the devil” that will encourage immorality and reduce women’s chances of meeting the requirements for marriage. The group’s charges contained in a report entitled “’Steps of the Devil’ came on the heels of the kingdom backtracking on a plan to build its first stadium especially designed to allow women who are currently barred from attending soccer matches because of the kingdom’s strict public gender segregation to watch games. The planned stadium was supposed to open in 2014.

Saudi Arabia, which does not have physical education for girls in schools and has hired consultants to draft its first ever five-year national sports plan but for men only, bowed to pressure last year to field for the first time ever women athletes at an international tournament, the London Olympics. It did so by fielding two expatriate Saudi females.

Women nonetheless play an important role in sporadic anti-government protests in Saudi Arabia, a country where discontent is simmering at the surface. Authorities earlier this month arrested 18 women in Buraida, a bulwark of Wahhabism, Saudi Arabia’s puritan interpretation of Islam, who were protesting the long-term detention of relatives without charges on suspicion of terrorism.

Women in Iran have the right to play provided their uniforms are compliant with Islamic precepts but like in Saudi Arabia are also barred from attending matches in all-men stadiums as spectators. Two women highlighted the issue during a World Cup qualifier last year when they smuggled themselves into the stadium dressed as men only to reveal themselves publicly after the match.

For their part, Kuwaiti Islamists denounced the Gulf University for Science and Technology’s organization of a soccer tournament for Gulf women teams. “Women playing football is unacceptable and contrary to human nature and good customs. The government has to step in and drop the tournament,” Kuwait’s Al Wasat newspaper quoted member of parliament Waleed al-Tabtabai as saying at the time.

Mr. Tabtabai was one of a number of deputies who earlier criticized the government and sports executives for allowing the Kuwaiti women’s national soccer team to take part in the Third West Asian Women Soccer Tournament in Abu Dhabi. The members of parliament charged that the women’s participation had been illegal and a waste of money. “Football is not meant for women, anyway,” Mr. Tabtabai said.

Prince Ali has however put conservatives on the defensive with his successful campaign last year to get FIFA to agree to observant Muslim soccer players wearing a headdress that complies with Islamic precepts as well as the world soccer body’s safety and security standards. The move set the stage for the WAFF campaign by taking away one major obstacle to women’s sports having the same status of the athletic endeavors of men.