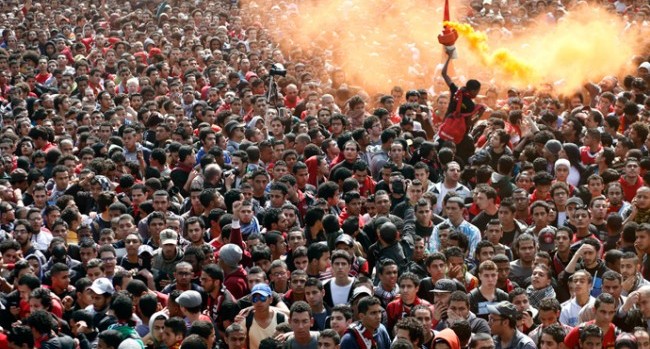 In a rare demonstration of unity, several groups of militant soccer fans have thrown down a gauntlet for the Egyptian interior ministry and its security forces by effectively demanding ownership of sports stadia.

In a joint statement, the fans declared that there was no room in the stadium for both the security forces and them. ”It is no longer viable for us both, it is either us or you,” the fans said, addressing the ministry directly.

The fans justified their claim by declaring that “football is for fans only, and not for pleasure of the interior ministry. We announce that the stands no longer belong to you, you will not be welcome again. The stands are for the audience, football fans, all the fans, this is our right.”

It was signed by arch rivals Ultras Ahlawy and the Ultras White Knights (UWK), supporters of storied Cairo clubs of Al Ahli SC and Al Zamalek SC who played a key role in the 2011 overthrow of president Hosni Mubarak and resistance to his military successors as well as fans of Ismaily SC of the Suez Canal City of Ismailia, Ghazi Al-Mahalla of El-Mahalla El-Kubra, a hotbed of labour activism, and Al Ittihad SC of Egypt’s second largest city, Alexandria.

In a bid to fend off a renewed vicious circle of violence, interior ministry spokesperson Hany Abdel-Latif said in response to the statement that private security companies would replace security forces in stadia starting with the next soccer season. “Security forces will be only concerned with safety outside the stadiums. But they will have the right to intervene at any time if violations occur,” Mr. Abdel-Latif said.

Suspended for much of the last three years, professional soccer matches restarted late last year behind closed doors to prevent the pitch from becoming a protest rallying point. The ultras staking of their claim in many ways reflects Egypt’s return to square one seven months after the military’s toppling of Mohammed Morsi, its first democratically elected president: the pitch emerging much like under Mubarak as a focal point of protest.

Relations between the fans and the ultras who adhere to the ACAP (All Cops Are Bastards) principle and the security forces have never been friendly. The security forces were under Mr. Mubarak Egypt’s most despised institution. Fans clashed regularly with security forces in the stadia and fought vicious street battles against them in the year after the president’s fall in which scores were killed and thousands of others wounded. Mr. Morsi’s failure to reform the security forces was one reason why public opinion turned against him.

Clashes with security forces have meanwhile increased in recent months. Police earlier this month used tear gas against the UWK when it attempted to force its way into a closed door African championship match. 27 Al Ahli supporters and 25 policemen were injured days earlier in a clash with security forces during another African game.

Fans see the continued ban on public attendance of matches as an indication that the military-backed authorities are afraid of allowing large gatherings, particularly of young men in a stadium. Rare talks between the interior ministry and some ultras failed recently with fans accusing the ministry of lack of goodwill. The talks followed meetings with youth activists hosted by interim president Adly Mansour and interior minister Mohammed Ibrahim that focused on widespread dissatisfaction among the youth.

The staking of the fans’ claim comes amid mounting disillusion among Egyptian youth who were the backbone of the 2011 popular revolt with the military-backed regime’s crackdown on protest and jailing of its opponents. “Worryingly, some youth have begun to adopt violent measures in reaction to police repression, including the use of live ammunition,” said Egyptian journalist Mostafa Hashem in article entitled ‘The Dangers of Alienating Egypt’s Youth’ in Sada published by the Carnegie Endowment for International Peace.

Youth were visibly abstained during voting last January for a new constitution. Hundreds of youth have been arrested since Egypt adopted a harsh anti-protest law in November, including some of the country’s most prominent youth activists. Thousands, including many youth, have been killed or arrested since last July’s coup against Mr. Morsi.

Fans’ claim of ownership of stadia under Mubarak propelled them into becoming the foremost group willing and able to confront the regime physically over a sustained period of time. It was those clashes in the stadia that turned them into a highly politicized, well-organized and street-battle-hardened force capable of forming the backbone of the resistance to attacks by security forces on Tahrir Square during the 18-day mass protest that forced Mr. Mubarak to resign after 30 years in office.

“The clashes that broke out between security forces and the Ultras (hard-core Al-Ahli soccer fans) on February 20, after Al-Ahi defeated Tunisia’s Sfaxien to claim the Africa Super Cup, showed the ongoing resentment toward police brutality,” Mr. Hashem wrote.

Soccer tensions are likely to be further fuelled by a court decision in February to hear the appeals of 45 soccer fans and officials as well as security officers convicted for being responsibility for the death of 74 Al Ahli fans in a politically-laden brawl in February 2012 in Suez Canal city of Port Said. Among the convicted were 21 supporters of Port Said’s Al Masri SC who were sentenced to death. The verdict sparked a popular uprising in cities along the Suez Canal.

“We do not expect anything from the judiciary. Retribution for the blood of our martyrs will be extracted only by our own hands,” Ultras Ahlawy said in response to the court’s decision to hear the appeals.