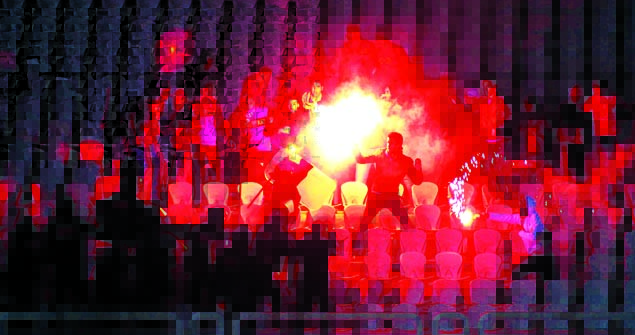 Egyptian security authorities, reluctant to lift a seven-month old ban on professional soccer, are considering testing the waters by allowing a limited number of fans to attend a closed door African championship match scheduled to be played in Cairo next month.

The move would constitute a small victory for Egyptian President Mohammed Morsi in his tug of war with the country’s security establishment. Mr. Morsi recently scored an important win by changing the top guard of the armed forces and successfully grabbing executive and legislative power from the military.

The battle for the lifting of the ban on professional soccer that has financially hurt the football industry severely and allowing fans back into the stadium is a litmus test of Mr. Morsi’s ability to impose his will on the unreformed interior ministry and its police and security forces, the country’s most distrusted institution because of its role as enforcers of ousted president Hosni Mubarak’s repressive regime.

Officials of Mr. Morsi’s government have so far unsuccessfully pushed for a resumption of professional soccer with the attendance of fans who played a key role in the toppling of Mr. Mubarak. The officials as well as the Egyptian Football Association (EFA) are calling for the Premier League to kick off on September 16, but have yet to get interior ministry approval. The ministry this week agreed however to allow the Super Cup final between crowned Cairo club Al Ahly SC and ENPPI to be played on September 8 behind closed doors and to admit some fans to an African Championship League match between Al Ahly arch rival Al Zamalek SC and Ghana’s Chelsea Berekum.

The military, the interior ministry, government officials, soccer executives and militant soccer fans have in recent weeks been locked in a complex dance focused on the security authorities’ refusal to lift the ban imposed in the aftermath of the death of 74 fans in February in a politically loaded brawl in the Suez Canal city of Port Said.

Egypt’s military rulers are employing the security-inspired sustained ban on soccer as a tool to undermine radical, highly-politicized and street battle-hardened soccer fans who emerged as the North African country’s most militant opponents of the armed force’s grip on politics and proponents of security service reform in the walk-up to Mr. Morsi’s presidency.

Their concern has been reinforced by last week’s clash in Tunisia between security forces and soccer fans in which 22 policemen were injured that followed the throwing of smoke bombs and the storming of the pitch by fans of Etoile Sportive du Sahel unhappy with their team’s poor performance against Esperance Sportive du Tunis. The incident has sparked calls for the banning of Tunisian fans from soccer matches.

The Egyptian effort to side line soccer as a national past time is in stark contrast to ousted President Hosni Mubarak’s use of the game to enhance his image and distract public attention from politics. It also counters Mr. Morsi, who has vowed to free soccer and sports in general from corruption and political interference and sees the resumption of professional soccer as a sign of Egypt’s return to normalcy after 18 months of volatility.

The government recently installed a new EFA board tasked with organizing within 60 days elections in the soccer body. Three competing lists – members of the Mubarak-era board, Islamist players and independent reformers – are campaigning for the election.

The interior ministry has so far refused to lift the ban on soccer imposed in the wake of the Port Said incident as long as enhanced security, including electronic gates, airport-style scanners and security cameras have not been installed in Egyptian stadiums.

While not unreasonable, the demand ignores the fact that security forces stood aside during the brawl in Port Said in what was widely believed to be an effort to teach a lesson to the militant soccer fans that got out of hand. It also fails to take account of the fact that the military and the government have refrained from reforming the interior ministry and its security forces.

That is not going unnoticed in a post-revolt environment in which the public is no longer distracted from politics. Media focus on Mr. Morsi rather than soccer contrasts starkly with the Mubarak era when, for example, the media at the regime’s behest focused on the beautiful game rather than the sinking of a ferry in which 1,100 people died. Public sentiment at the time blamed government corruption for their deaths.

As a result, the debate about soccer is as much about politics as it is about sports. It is a debate that is likely to be fought out politically rather than on the pitch. However, failure to resolve the issue politically risks fans demanding reinstitution of soccer and their right to attend matches on the street rather than at the negotiating table.