Egypt ‘Tests the Waters’ With Lift on ‘Soccer Fan Ban’ 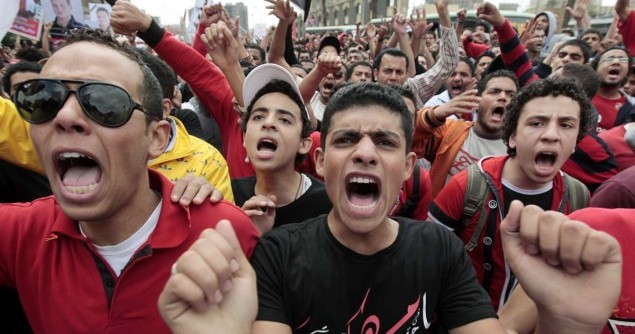 Egypt is testing with a partial lifting of a ban on fans attending soccer matches whether the country after 18 months of political volatility, including violent protests before and after last year’s ousting of president Hosni Mubarak that led to the republic’s first free elections, has finally returned to a more peaceful resolution of political and moral issues.
An interior ministry decision to allow a limited number of fans, who played a key role in the protests before and after the toppling of Mr. Mubarak constitutes a political victory for newly elected Islamist President Mohamed Morsi. The ministry has in recent week resisted calls for a resumption of professional soccer matches in the presence of fans by members of the Morsi government, including sports minister El-Amry Farouq, and the government appointed acting head of the Egyptian Football Association (EFA).
The ministry suspended professional soccer and banned fans from matches in February in the wake of a politically loaded soccer brawl in the Suez Canal city of Port Said that left 74 militant soccer fans dead. It has since insisted that the suspension and the ban could only be lifted once cash-strapped soccer clubs had introduced proper security infrastructure and stringent security measures in Egyptian stadiums.
In an apparent softening of its position, the ministry this week said it would allow some supporters of crowned Cairo club Al Zamalek SC, who are among the country’s most politicized, militant, well-organized and street battle-hardened fans, to attend an African Champions League game in Cairo against Ghana’s Berekum Chelsea.
In doing so the ministry appears to agree with scholars Eduardo P. Archetti and Amilcar G. Romero who almost two decades ago asserted that “football does not only reflect society or culture but is part of the way that a society models some of its central existential, political and moral issues.”
Fan behaviour on Saturday will serve as an indication of whether Egyptian society is shifting from street to parliamentary politics and the backroom horse trading associated with it. Mr. Mubarak’s overthrow at the end of 18 days of mass protests was followed by more than a year of street agitation and repeated vicious street battles between security forces and militant youth and soccer fan groups in which scores were killed and thousands injured.
The EFA has called on supporters of Zamalek to be on their best behaviour to ensure that they do not endanger next month’s planned resumption of premier league games. The matches are expected to be largely played in military stadiums.
Authorities are apprehensive following the storming of a pitch earlier this month in neighbouring Tunisia in which 22 police officers were injured. The Confederation of African Football (CAF) has expelled Etoile Sportieve du Tunis from the African club championship as punishment for the incident. Zamalek fans invaded the pitch last year in the first post revolt Egyptian-Tunisian encounter.
EFA spokesman Azmy Megahed said that the soccer body was relying “on Zamalek fans to display sportsmanship and send a message to the world that Egypt is safe. That match will also pave the way for the resumption of domestic football ahead of the league’s launch on 17 September.”
Scholars who have studied violence in stadiums caution that violence is as much dependent on fan behaviour as it on attitudes and perceptions of security forces. Much of the violence in recent years in Egyptian stadiums and the clashes in the last 18 months were the result of deep-seated fan animosity towards security forces who are widely viewed as having brutally enforced the Mubarak regime’s repression. Calls for a reform of the Egyptian police and security forces have so far remained unheeded.
To the protesters and the militant soccer fans, defeating the police amounted to defeating what School of Oriental and African Studies professor Salwa Ismail  described as “fear and the culture of fear that continuous monitoring, surveillance, humiliation and abuse have created.” To ordinary Egyptians, the state represented by the security forces in the words of London School of Economics and Political Science historian John Calcraft is “in the detention cells, in the corrupt police stations, in the beatings, in the blood of the people, in the popular quarters.”
Messrs. Archetti and Romero, describing Argentinian soccer violence noted that “the police in the stadia … are perceived not as neutral and shallow actors but as central and active participants. To resist and to attack the police force is thus seen as morally justified.” For their part, “the police came to define the fans as a political enemy. Stadiums were then converted into political arenas,” the two scholars said, warning that fan groups had evolved into well-trained fighting organizations.
Egypt’s militant soccer fans demonstrated their skill in the years of stadium battles in the run-up to Mr. Mubarak’s overthrow and the street battles since. By limiting the number of fans that will be allowed to attend Saturday’s African championship match, chances are the game will proceed peacefully. The threat of soccer violence is however likely to remain acute as long as the Morsi government does not move to reform the security forces and hold them accountable for their actions.