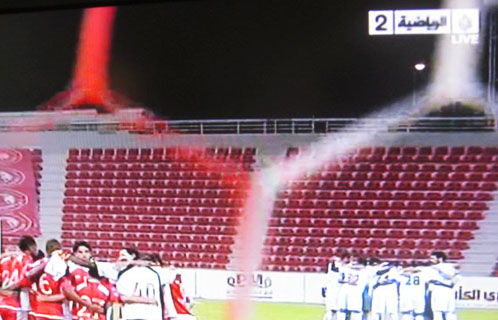 Football – Failing to Draw the Crowds

As the United Arab Emirates and other energy-rich Gulf states like Qatar investigate ways to redress their demographic imbalances, soccer constitutes both a litmus test of how far governments have yet to go in building equitable societies and an instrument to give their expatriate populations a feeling of having a stake in their newly-found homes.

A mere 13 percent of the UAE’s population has citizenship. In Qatar that figure jumps to 26 percent in Qatar while Kuwaitis account for 34 percent of Kuwait’s population. Those percentages are dropping as Gulf states import large numbers of expatriate labor to staff their countries’ rapid development. The decreasing number of their own nationals is forcing the Gulf states to explore ways of maintaining their identity and ensuring that their minority political and social control is sustainable.

With expatriates having virtually no rights to indefinite permanent residency, let alone citizenship, that is a tall order. The question is whether it is at all possible over the long-term or whether Gulf states will at some point have to embrace radical, for many frightening change.

Saif bin Zayed told the Council that the government had almost finalized its strategy to tackle the demography issue.

While Gulf governments are cautiously seeking to come to grips with a situation in which over time they are likely to have to grant rights to at least some segments of their expatriate population such as natives of other Gulf states or, if casting a broader net, Arab immigrants, they have yet to take steps, that would immediately diminish a sense among a majority of foreigners of being at best tolerated guns for hire.

Western consultants advising Gulf institutions on various ways of tackling what could be the largest time bomb threatening Gulf states, point to soccer as an effective release valve that would give expatriates some sense of stake in the society they live in and encourage a virtually absent degree of bonding between expatriates and locals.

“The region’s soccer culture fails to bring population groups together. The infrastructure is geared exclusively to nationals, not to the populations as a whole. Resident expats are not allowed to play in local clubs. The result is empty stadia. Governments lack cultural enterprise when it comes to soccer. They are starting to develop a vision but nothing happens overnight,” says one consultant who has advised governments and soccer clubs across the region.

The focus on local nationals rather than the whole population is one reason Qatar has had problems filling its stadia during the Asia Cup and explains the overall low spectator rate at soccer games in many of the smaller Gulf states.

Complicating efforts to develop soccer as an integrative tool are the Gulf’s deeply ingrained tribal relationships that mitigate against opening soccer to the region’s population as a whole rather than only to its nationals. Many of the region’s clubs have tribal roots.

FIFA suspended Kuwait twice in 2007 and 2008 because of alleged government interference in the country’s soccer association. At issue was the fact that FIFA objected to the board of the Kuwaiti federation having too many members. Tribal politics rendered streamlining of the board impossible, all the more so given the royal family’s close association with the federation. Joining a soccer board is a platform for launching a political career, says Jon Nordenson in an analysis on the Gulf Research Unit’s Blog. Kuwait’s twelve main tribes account for half of the country’s voters.

Tribal relations carry relatively more weight in a region in which citizenship and national identity are fluid concepts. Raymond Barret recalls in The Guardian applying what he describes as the Norman Tebbit sporting loyalty test during the half time of the 2007 Asian Cup final when he queried an Emirati in a coffee shop in Dubai, one of seven emirates or states that constitute the federal UAE. “This young Emirati citizen confessed that, given the choice, he’d rather play up front for a Dubai “national” team than the UAE, his supposed homeland,” Barrett reported.