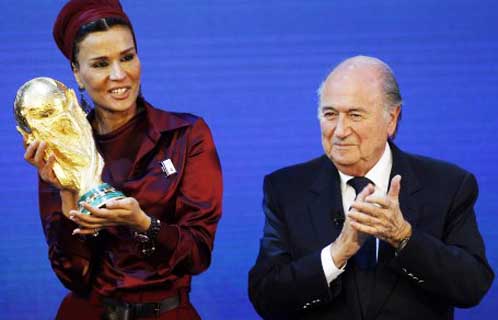 A British parliamentary inquiry into soccer governance is expected to take world soccer body FIFA to task for being “contemptuous” and “dismissive” in its response to allegations that Qatar won the right to host the 2022 World Cup by bribing two members of the organization’s executive committee.

In a report scheduled for publication on Tuesday, the British parliament’s Culture, Media and Sport select committee will also call for an independent review into the corruption claims first leveled by The Sunday Times newspaper, according to the BBC.
The report is likely to also criticize FIFA for its handling of charges of corruption in campaigning for last month’s presidential election. FIFA president Sepp Blatter was re-elected unchallenged for a fourth term after Asian Football Confederation president Mohamed Bin Hammam, a Qatari national who was closely involved in Qatar’s World Cup bid, withdrew his candidacy hours before being suspended pending an investigation of the charges.

The Sunday Times, in a letter to the select committee accused Fifa executive committee members, Issa Hayatou and Jacques Anouma of being paid $1.5 million each for their votes in favor of the Qatari bid.

Mr. Bin Hammam is being investigated for conspiring with FIFA vice president Jack Warner to bribe Caribbean soccer officials to support his FIFA presidential bid. Mr. Warner last month resigned from his positions in FIFA and the body that governs soccer in North and Central America and the Caribbean.

Mr. Bin Hammam and Qatar have denied the charges against them.

The charges are part of the worst scandal in FIFA’s 107-year history. Up to 10 of FIFA’s 24 executive committee members have recently come under suspicion of corruption or unethical behavior. Two committee members have been already been banned. Mr. Blatter was cleared of any charges days before his re-election.

Former English Football Association (FA) Lord Triesman accused in May Mr. Warner and three other FIFA executive committee members — Ricardo Teixeira, Nicolas Leoz and Worawi Makudi — of asking for favors in return for their votes. FIFA subsequently said the four men were cleared of the allegations in an independent report commissioned by the FA.

Mr. Blatter has admitted wrongdoing by bidders for the 2018 and 2022 tournaments, which were awarded last December but has resisted investigating the allegations against Qatar. England lost its bid for the 2018 games to Russia. The English bid secured only two votes in the FIFA executive committee and was knocked out in the first round of voting.

The UK parliamentary call for an independent investigation of the alleged Qatari bribery follows a similar call by the German football association.