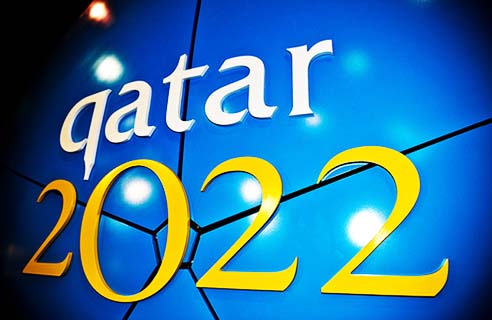 Mr. Blatter’s declaration at the end of a FIFA executive committee meeting in Tokyo is certain to be welcomed in the Gulf state but infuriate members of his executive committee, some soccer officials and deputies of the British parliament who have been demanding an independent investigation.

The FIFA president’s statement comes as the Gulf state is under pressure to improve labour conditions and overhaul archaic laws governing the import of foreign labour who constitute a majority in a country of less than 300,000 people that has embarked on a massive infrastructure frenzy in advance of the World Cup and is preparing to bid for the 2020 Olympic Games.

Mr. Blatter appeared to dismiss the controversy about Qatar on FIFA’s decision to a year ago award the 2018 tournament to Russia at the same time that it crowned the Qatari bid. He called the simultaneous awarding not the “best and most intelligent decision,” but insisted that “the 2022 World Cup will be in Qatar and I don’t know who can change this decision. I personally will intervene if FIFA executive members continue with such declarations,” he said referring to demands for an investigation by German and Australian soccer czars, Theo Zwanziger and Frank Lowy.

“The past is past and we have to look forward. The boat is still not in still waters but we are bringing it back to port. Regrets, yes. But you can’t live in regret. You can have regrets but you can’t go back and change the past. You must have a positive approach and I have the energy to go forward and bring back the credibility of FIFA and take care of public opinion,” Mr. Blatter said.

In a series of interviews last month, Mr. Blatter said the soccer body’s newly created Good Governance Committee would have the authority to review the awarding process of the World Cup to Qatar. Mr. Blatter appears to have reversed course and challenged that authority, raising further doubts about the sincerity of his anticorruption campaign.

Qatar’s bid has been mired in controversy prompted by questions about its well-funded bid campaign as well as potential problems because of its searing summer temperatures, sour grapes on the part of its competitors and allegations made by a disgruntled employee of its bid committee.

The banning in July by FIFA of Asian Football Confederation president Mohammed Bin Hammam, Qatari national, on charges of bribery in his failed FIFA presidential campaign cast a further shadow over the Gulf state’s bid campaign. The banning of Mr. Bin Hammam, who like Qatar denies all wrongdoing and is appealing the penalty, is part of the worst corruption scandal in FIFA’s 107-year history.

Reports that French President Nicolas Sarkozy engineered UEFA head Michel Platini’s vote in favour of the Qatari bid at a meeting in November 2010 with Qatari Crown Prince Tamim Bin Hamad al-Thani in which he also persuaded the Qatari to acquire financially troubled French team Paris Saint-Germain have also revived questions about the Gulf state’s hosting of the World Cup. Qatar walked in 2006 away from a possible acquisition of the underachieving club that was haemorrhaging money and was renowned for its hooligan element.

The initial discrediting of the allegations against Qatar by the confession of a disgruntled bid committee that she had fabricated many of those that had been leaked to the media has failed to stop the British parliament’s media and culture committee from demanding an independent investigation of the awarding of the 2022 tournament to Qatar.

In an article in The Huffington Post and in various press interviews, Damien Collins, a member of the parliamentary committee noted that “six months ago, Sepp Blatter promised reform at FIFA, yet in reality little has changed. There has yet to be a truly independent investigation into allegations of corruption made against FIFA executives during the bidding process to host the 2018 and 2022 World Cups. In the last year, 11 of the 24 leading members of FIFA, who make up its executive committee, have faced serious allegations of corruption.”

Mr. Blatter’s backtracking is also likely to cast doubt on the sincerity of FIFA’s pledge to help bolster the rights of migrant workers building the 2022 World Cup infrastructure in Qatar in a bid to fend off a global trade union campaign that would have denounced the Gulf state as a slave driver.

The pledge was made after a meeting in November between labour leaders and Mr. Blatter in which the trade unionists handed him a letter outlining their plans for a  campaign with the slogan, ‘No World Cup in Qatar without labour rights’.

Labour and human rights activists see the World Cup as an opportunity to focus attention on the circumstances of poorly paid migrant workers in Qatar and elsewhere in the Gulf, which includes a ban on workers leaving a company without its permission.

A second issue labour and human rights activists are focusing on are the low salaries paid to migrant workers. A blue collar worker in Qatar earns a basic salary of some $165 a month plus a $60 food allowance, a far cry from what Qataris and foreign white collar employees get. They are the ones who will build the massive infrastructure projects in the run-up to the World Cup, including a metro, a railway, stadiums and tens of thousands of hotel rooms.

The activists say working conditions, including at times late payment, has fuelled a relatively high death rate among migrant workers. Citing government figures, the activists say some 200 of 300,000 Nepalis working in Qatar die each year in accidents and of heart disease and suicide although most are below 30.

Beyond the foreign labour issue, Qatar’s 2022 supremo Hassan al-Thawadi says that the Gulf state is still seeking to alleviate fears that technology will not be able to alleviate scorching summer heat and that the tiny country will be unable to attract sufficient fans because its soccer culture is not deeply rooted.

Qataris describe how soccer was introduced in the 1940s by British oil workers much to their amusement.  “We had no idea of sports like that … But we used to enjoy watching the strange spectacle,” recalls Ibrahim al-Muhannadi in an interview with the Financial Times.

Mr. Al-Thawadi argues that Qatar has faith in the cooling technology it intends to deploy in stadiums because it is already being used in the country’s Al Sadd stadium. He has also no doubt that Qatar will attract fans, noting that the United States, Japan and Korea were successful at a time that they were still developing their soccer culture. He is counting not only on fans from outside the region but also supporters from the Middle East and North Africa who normally would not go to a World Cup.