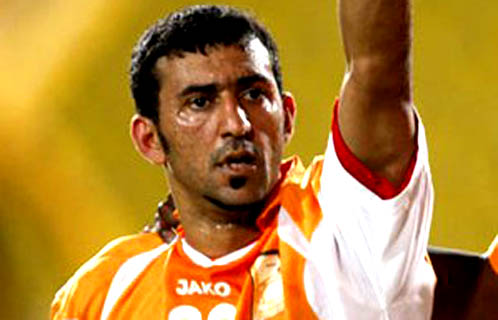 Bahraini sports clubs have dismissed at least 12 sports people and executives, including two of the country’s top soccer players, because they participated in anti-government demonstrations. The dismissals are widely believed to have occurred at the behest of the government.

Al Alhli confirmed the firing of national soccer team striker Ala’a Hubail and his brother Mohammed in a statement. The dismissal followed a Bahrain TV broadcast that showed the brothers among anti-government demonstrators. Ala’a was nicknamed Golden Boy when he became the first Bahraini to win the Golden Boot award for scoring five goals during the 2004 Beijing Asian Cup.
Media reports said that the two brothers had been arrested on Tuesday during training. The Times of London put the total number of sportspeople suspended at 200.
“The move could leave Bahrain in breach of international rules separating politics and sport. All the men suspended are Shia Muslims,” The Times said.
The TV programme that showed footage of the brothers at demonstrations on Manama’s Pearl Square set out to name and shame sports stars taking part in the protests. It denounced the protesters as “stray hyenas”.
Among the Shiite officials sacked are Jaffar Alkhabaz, a Fifa-certified referee, and Mohammed Sayed Adnan, notorious for missing a penalty in the World Cup play-offs against New Zealand last year, The Times reported. Several leading basketball, volleyball and handball players have also been banned by their clubs from competition, the paper said.
The arrests came five days after Al Ahli pulled out of the Gulf Cooperation Council (GCC) Clubs Championship saying that the protests had prevented many players from attending training sessions.
The Bahrain Olympic Committee last month postponed for the second time the first edition of the GCC Games until September because of the island’s political turmoil. The Olympic Committee made no mention of the protests, justifying the delay instead by saying it gave Gulf sportspeople more time to prepare for the games.

Bahrain has cracked down on protesters and invited troops from fellow Gulf states, including Saudi Arabia, to help it maintain law and order. Scores have been killed and wounded in the protests.