The Bahrain Grand Prix Furore: It’s Only A Race 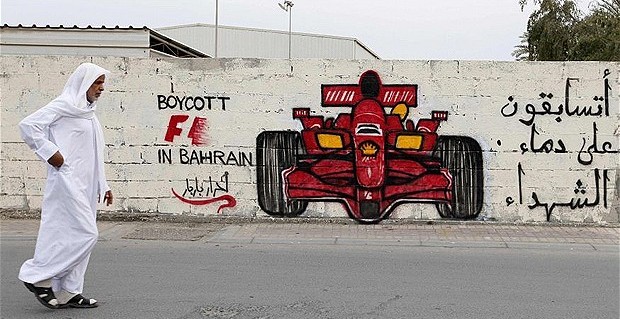 As political footballs go, the Bahrain Grand Prix is not exactly major league.

The cancellation of the 1968 England cricket tour to South Africa, the black power salute at the Mexico City Olympics in the same year, the US boycott of the 1980 Moscow Olympics and the USSR’s reciprocal gesture in Atlanta four years later – all easily outrank the current brouhaha on the political Richter Scale.

I for one hope the event goes ahead, not for the sake for Bernie Ecclestone and the faceless suits who run F1. Nor would I have much sympathy for the preening narcissists in the flashy helmets – brave and talented though they may be – if the race is called off. For them, another day, another race.

I don’t know how many genuine FI fans there are in Bahrain. Perhaps quite a few if the ducking and diving on the Kingdom’s highways is anything to go by. For them the race will be a welcome distraction from the daily activities in the island hot spots – a taste of normality perhaps. But my hopes are more for the small business owners, the traders in the souks, the malls and the corner shops, whose businesses have been slowly strangled over the past year.

Of course there are others who have lost more – the traders of Homs, Hama and Damascus for example.  But we all have to face our own realities, and life is not good for many Bahrainis who are impoverished bystanders in the current troubles. They deserve a break.

As for the race, I shan’t be there. I can’t see the point of sitting in a stand watching a stream of projectiles zizzing past every three minutes at a speed faster than the eye can follow. I’d rather watch it on the box, even though the departure of Murray Walker has bled the colour out of the TV coverage. These days it’s all technospeak and celebrity hunting.

The portrayal of the race as a unifying event has unfortunately turned it into something of a hostage to fortune. True, not quite on the scale of Kim Jon Un’s ballistic folly that dropped into the sea in front of the watching world yesterday morning. But the Bahrain Grand Prix has become a large and obvious target.

The sentiment of unity is good. Turning sentiment into reality will take more than a few speedfests around Sakhir.

So here’s hoping that the petrolheads of Bahrain and thousands of visitors have a thrilling weekend, that some of Bahrain’s long-suffering small businesses reap the dividend, and that the country then returns to the business of building bridges and finding a way out of the current impasse.

Nothing saddens me more than to sit in a corner café of an evening watching young and old smoking shisha, playing dominos, laughing and joking – and to wonder if some of those youngsters will be back on the street an hour or two later, lobbing rocks and Molotov cocktails at the police in yet another fiery confrontation.

The sooner Bahrain emerges from its national psychosis the better. The older generation should know better than to stoke the fires. The younger generation will only realise later what they are losing by being consumed with resentment.

A little more emotional intelligence from all parties is called for. Ask the people of Northern Ireland, who endured thirty years of pain – for what?

As for the Grand Prix, it’s only a race, for goodness sake.