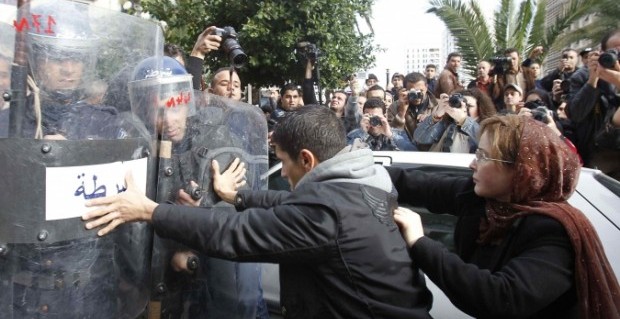 Fears that anti-government protests in Algerian soccer stadiums and provincial towns could again spill into the streets of the capital Algiers have prompted the government to ban matches in early May when Algerians go to the polls.

The ban follows failed efforts by the government to persuade soccer officials to speed up this season’s premier league so that it would end no later than May 10, the day of the parliamentary election, rather than on May 22, the scheduled end of the soccer season. Efforts to rush teams through the season’s schedule in a bid to end this year’s league early were in part thwarted by the cancellation of several matches as a result of unusually heavy snowfall this year.

“We’re doing our best to accommodate for the obligations of league and clubs. We believe that it is impossible to end the season before May 10th, the date set for holding the election. We’ve agreed with the public authorities not to schedule any activities during the week of election, provided that the league and clubs are allowed to resume their activities after the election,” Professional Football League (LFP) president Mahfoud Kerbadj told the Maghrebia news web site.

The suspension of matches during election week, a period in which rallies and assemblies are banned by law, is designed to free security forces from having to police stadiums where football fans regularly take on President Abdelaziz Bouteflika and the military ever since anti-government protests fizzled out in early 2011.

The suspension reinforces a fragile, tacit understanding between soccer fans and security forces that allows the fans to raise their grievances as long as it is contained to the stadiums. The government fears that militant soccer fan groups or ultras associated with a host of teams, including MC Algiers, Mouloudia Club D’Oran and Jeunnesse Kabyle, while less organized than their Egyptian counterparts, could emerge as a force if the protests again spill into the streets of Algerian cities.

The understanding between the security forces and the fans was made in part possible by the fact that Algeria has been among the most advanced in the Middle East and North Africa in encouraging the emergence of soccer as a professional sport rather than a policy tool for the government.

“In a context of political closure, a lack of serious political debates and projects for society and of a weakened political society, football stadia become one of the few occasions for the youth to gather, to feel a sense of belonging (for 90 minutes at least), to express their frustrations over their socio-economic condition, to mock the symbol of the state’s authority and to transgress the boundary of (imposed) political order and institutionalized language, or the narrative of the state’s political and moral legitimacy,” cautions Mahfoud Amar in a recently published book, ‘Sport, Politics and Society in the Arab World.’

With discontent over lack of water, housing, electricity and salaries pervading the country and erupting almost daily in protests inside and outside of stadiums suspension of soccer matches has become a fixture of Algerian life. The government early last year suspended the league for weeks after protests erupted in Algiers and other cities in the wake of the toppling of Tunisian President Zine el Abedine Ben Ali.

A quarter of the Algerian population lives under the poverty line and unemployment is rampant. Recent protests in Laghouat and other oil and gas cities are symbolic of simmering discontent and have gone viral in social media. The government again suspended soccer matches last year after riots erupted in the Algiers neighbourhood of Bab el-Oued.

“Bouteflika is in love with his throne, he wants another term,” is a popular anti-government chant in stadiums, referring to allegations that 74-year old Mr. Bouteflika is behind a spate of recent bombings in a bid to enhance his position in advance of a presidential election in 2014 by raising the spectre of a threat by Al Qaeda’s North African affiliate, Al Qaeda in the Islamic Maghreb (AQIM).

Mr. Bouteflika, whose health is failing, has lost several of his closest associates over the past year as a result of a military-inspired corruption investigation. His efforts at political and economic reform designed to attract foreign investment and diversify the economy have been thwarted by the military’s desire to retain its privileges by reinforcing the state’s role in the economy.

The military has further signalled in advance of the May election that it will adopt a hard line towards domestic unrest as well as AQIM. It recently recalled from retirement Gen. Bachir Tartag to head the Directorate for Internal Security (DSI). Gen. Tartag made a name for himself during the civil war against the Islamists in the 1990s as one of Algeria’s most notorious hardliners and a brutal military commander.

The appointment positions him as a potential successor to aging Algerian spy chief Gen. Gen. Mohamed ‘Tewfik’ Mediene, widely viewed as the number two within the Algerian regime. It comes at a time that there are no clear successors to Algeria’s ageing but opaque military leadership. Gen. Tartag succeeds Gen. Abdelkader Kherfi who was criticized for having failed to prevent the kidnapping of three European aid workers in October of last year and for his handling of the protests in the first quarter of 2011.

Algeria has recently adopted a number of laws that emphasize security rather than reform and impose restrictions on the media, associations and political parties, which according to Amnesty International violate international conventions signed by Algeria.

While signalling that it will take a hard line against anti-government protesters, the government and the military are banking on the assumption that allowing protests in stadiums as a release valve coupled with last year’s lifting of the state of emergency, increased subsidies of basic goods and public sector wage and memories of the massive bloodletting in a decade-long war between the military and Islamist forces will stymie activists’ desire to confront the regime head on. That assumption is reinforced by the fact that the experience of popular uprisings in Egypt, Libya and Yemen has so far produced mixed results and the spectre of protests descending into pro-longed bloodshed and chaos as it has in Syria.

With discontent nonetheless continuously manifesting itself, the government and the military are walking a tightrope. The seeming return to the very policies that brought protesters on to the streets of Algerian cities early last year could at any moment again tip the balance.