A Work of Art: The Football Maker of Marrakech 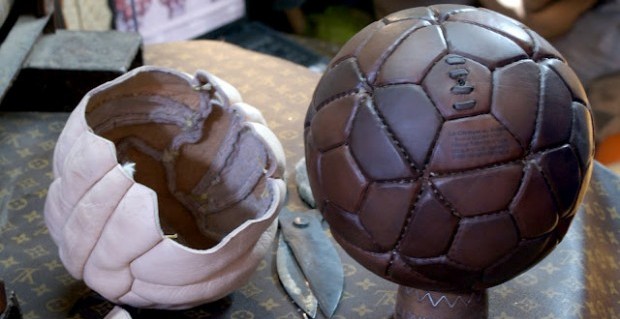 Anyone who plays football these days can think themselves lucky that when they head the lightweight plastic ball into the corner of the net they don’t have half a kilo of stiff leather pounding their skull. And imagine how heavy it would be when the game was played on a soaked pitch in the middle of winter; it was bad enough kicking it, and there must have been many a silent prayer offered up that the flat leather lace that held the ball closed over the inflated pigs bladder inside didn’t connect with the forehead, leaving a nice striped pattern on the skin for the next couple of hours, and a painful memory for even longer.

To buy a real handmade leather football is almost impossible, unless you go to a tiny workshop, barely bigger than a couple of kitchen cupboards, deep in the souks of Marrakech Medina, where Kamal Boukentar spends his days hand-sewing footballs and rugby balls made from original patterns dating as far back as 1900. He’s the only handmade leather football maker in Morocco, and one of only a handful left in Europe.

“Mohamed Boukentar, my father, started the shop in 1965, and was one of about twenty makers in the Medina at the time. During the seventies my mother, Lalla Aicha, worked with him, and is the only woman ever to have hand-sewn leather footballs in Morocco. I began in 1984, when I was twelve, and it took me a week to make my first ball.”

It may well be a coincidence, but that ball was bought by Michel Platini, who played for the French national team when they won the European Championship in the same year. When we meet, Kamal is working on a model from the 1930s with eighteen panels. Most people probably just assume that a football is made from a basic design, which is exactly what I thought – which goes to show how most people, including me, are completely wrong.

Most modern footballs are made up of thirty-two panels. (For the 2006 World Cup, FIFA introduced a 14-panel football, a style that will be used until at least 2014).  An original football can be made up of ten different numbers of pieces from four to thirty-four, and each of those will have three or four different designs, around thirty different patterns in all. On a shelf about his counter is the ultimate in the fine art of football making, a ball of seventy-two pieces, probably one of only two in the world, one made by Kamal, the other laboriously sewn by his father many years ago.

Kamal sits on a wood and rush chair outside his workshop, La Clinique du Ballon, where his father started sewing footballs almost half a century ago, (there’s barely enough room inside to turn around, never mind work), painstakingly sewing three panels together with an exactness of stitch that makes you think it has been sewn by machine. Occasionally he stops to spray the seam he is working on with water, to soften the leather and make it easier to sew.

“I can make an eighteen-piece football in one day,” says Kamal, “but that one took me ten days of solid work. It’s purely for display, to show just how intricate a ball can be, and there is no price in the world that would get me to part with it.”

“I buy my leather from a friend who works in the tannery in the Medina,” says Kamal. “I need special skins, but when I buy them I have to line them with fabric or the needle would split the hide when it was sewn. I usually get about two-and-a-half footballs out of a skin, depending on the pattern, because even though the standard size of a football these days is sixty-nine centimetres in circumference, the older patterns we use are slightly larger, seventy-four centimetres.”

As the ball comes together like a complicated inside-out puzzle, it is finally drawn through the split which is later closed with a flat leather lace, after the rubber bladder that inflates the ball has been inserted. Fortunately, Kamal doesn’t go as far as using a pig’s bladder as they would in the early days of football.

In its natural state, the leather is pale beige, but after three carefully rubbed-on coats of olive oil, it attains the rich brown colour and muted sheen of memories of games played by men with short haircuts and knee-length baggy shorts, and who didn’t feel the need to kiss and cuddle each other whenever a goal was scored.

Despite being a sporting work of art, Kamal’s footballs are never likely to see a football pitch. “Most people buy them for decoration or as gifts. One of my best customers is a friend who owns the restaurant A Moda in Bergamo in Italy. He orders fifty at a time and sells them to his clients. But I like it when an older man buys one because it reminds him of when he played football as a boy. I’ve got an original pair of 1930s boots on display and sometimes people tell me what it was like playing in them. Heavy and uncomfortable, by the sound of it!”

One Response to A Work of Art: The Football Maker of Marrakech