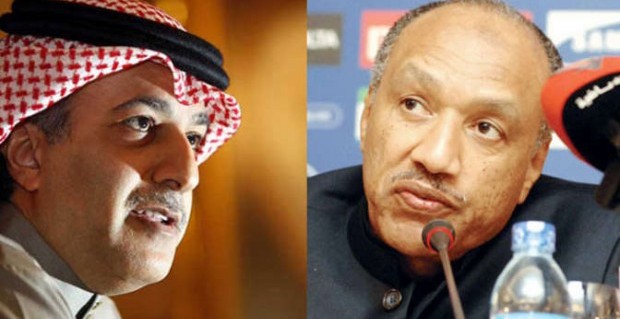 With campaigning started for the election of a new president of the Asian Football Confederation to succeed disgraced Qatari national Mohammed Bin Hammam, soccer officials are concerned that the candidacy of Bahrain Football Association president Sheikh Salman bin Ebrahim Al Khalifa could prove to be another embarrassment.

Sheikh Salman alongside former UAE soccer federation head Yousuf al Serkal have let it be known that they would be vying for the top Asian soccer job.

Zhang Jilong of China who took over as acting head of the AFC after Mr. Bin Hammam was barred last July for life from involvement in professional soccer by world soccer body FIFA on charges of corruption is also believed to be vying for the job.

“I am interested in becoming president permanently on the condition that I am recognised by all my friends and brothers on the executive committee, as well as the other 46 members’ association,” the South China Morning Post quoted Mr. Jilong as saying.

“We need to be one family, as brothers, for we are on one boat sailing towards the future. If I become president permanently, I wish to work for the solidarity and development of Asian football,” he added.

The AFC has until late May to elect a new president to succeed Mr. Bin Hammam who is legally suspended as president pending his appeal in the Court for Arbitration of Sport (CAS) against the FIFA ban.

Mr. Bin Hammam has denied allegations that he had last year bribed officials of the Caribbean Football Union (CFU) to support his failed bid to defeat long standing FIFA head Sepp Blatter in a presidential election.

Sheikh Salman is a controversial candidate because of his backing last year of the arrest, torture and/or firing of 150 athletes and sports officials, including several national soccer team players on charges of involvement in anti-government protests.

“I have great confidence in getting great support from many parties, I received during launching the (past) electoral battle with Mohamed Bin Hammam,” Sheikh Salman told sports television channel El Dawry and El Kass.

“We have received promises of support by many Asian federations to give me her voice in the election, and I have to speak with Mohamed Bin Hammam, where he stressed his support for me and his blessing,” Sheikh Salman added.

Senior Asian soccer officials said rather than backing the government crackdown, Sheikh Salman, a member of Bahrain’s minority Sunni Muslim royal family, should have conducted an independent investigation into the allegations. “Sheikh Salman carries too much baggage,” one official said.

In response to a FIFA query last year, Sheikh Salman flatly denied that any soccer player had been detained or otherwise affected for participation in the protests. Surprisingly, there is no public record of FIFA challenging Sheikh Salman’s assertion. On the contrary, FIFA last October Sheikh Salman to its 2014 World Cup committee.

Bahrain backed by the Saudi-led Gulf Cooperation Council (GCC) has asserted that the demonstrations were instigated by Shiite Iran in a bid to sow sectarian discord and destabilize the predominantly Shiite Gulf island.
The crackdown a year ago involved the imposition of martial law for nearly three months, the sacking of some 2,000 people from government jobs and detention of 3,000 others as well as the of ordering military trials for several hundred.
Among the athletes put on trial were brothers Alaa and Mohammed Hubail, who are national soccer team stars. Alaa has said that he and his brother had been abused and humiliated during their detention. ,
Another national soccer team player, defender Sayed Mohamed Adnan, fled to Australia where he joined Brisbane Roar after having spent three month in prison during which he asserts that he was beaten and tortured.
Bahrain halted in December legal proceedings against the athletes and sports officials in a bid to improve the government’s tarnished image after state-run Bahrain News Agency reported that King Hamad bin Isa Al Khalifa had forgiven them. A military court a week earlier sentenced Bahrain national soccer team goalkeeper Ali Said, bodybuilder and several times Asian championship gold medallist Tareq al-Fursani, and national basketball team player Hassan al-Dirazi to a year in prison for participating in the protests.
Despite being widely viewed as a former associate of Mr. Bin Hammam, Mr. Al Serkal has the reputation of being clean and untainted by shady dealings. Hoping to capitalize about concerns about Sheikh Salman, Mr. Al Serkal has been positioning himself as the Arab consensus candidate.
“I am very clear about one thing, and that is the need for this part of Asia to have a consensus candidate rather than two contesting for the post of president. There has been an intention from Sheikh Salman and we need to ensure there is one candidate from the Gulf and Arab world for next year’s elections,” the Dubai-based Gulf News quoted Mr. Al Serkal in October as saying.

Japan’s Kohzo Tashima, was last year reported to want to run for the job despite the fact that he enjoys little support in the region.

Beyond coming at a time that soccer’s governing bodies have been involved in some of the worst scandals in their history, the presidential election comes as the AFC has been a leader in tackling thorny issues such as the ban on Muslim women players wearing a headdress in line with their religious beliefs during matches and efforts to further grassroots soccer.

The International Football Association Board (IFAB), which governs the rules of association soccer, is scheduled to meet on March 3 to discuss an AFC proposal to allow a headdress for observant Muslim women that meets safety standards as well as the female players’ religious requirement.