Your Time: The Commitment That Grows Communities 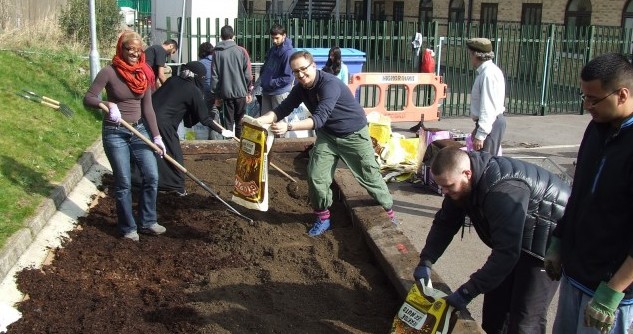 A report published at the end of last year in the UK considered the place of national pride.  “Patriotism has become a dirty word to some and a nostalgic exercise for others,” it wrote. “For many on the left, it is a problematic concept, seen as the gateway to jingoism, nationalism and arrogance. For the right it is equated with outdated symbols of Britishness like the battle of Trafalgar and the Union Jack. On both sides of the spectrum, patriotism has been misconstrued, misrepresented and its significance undervalued.”

The debate around this concept has been particularly difficult for Muslims because they are usually scapegoated as the source of diluting or even sabotaging ‘Britishness’. There is constant paranoia and inflammatory talk of ‘creeping Islamisation’ or the threat of shariah law being imposed by stealth on the UK, chipping away at ‘our’ way of life.

The report looked at a cross section of British society and their attitudes towards the nation to see what national pride and patriotism actually mean. This is a good question since politicians over the last decade have struggled to come up with a robust answer. There has been much talk of shared values. But when it came to defining what exactly those values are, the answers tended to be generic universal truths such as freedom, justice and respect. Which country, nay which person,  wouldn’t say those were it values?

The report found that British patriotism is “founded on a profound, emotional connection to the everyday acts, manners and kindnesses that British people see in themselves. […] Those who love their country most are shown to volunteer more and to trust their neighbours more than those who are either ambivalent or ashamed about Britain.”

Those who have better neighbour relations, and volunteer in their local communities show greater pride at a local and a national level. So it should come as no surprise (not to Muslims anyway) that Muslims showed more pride as well as optimism in the nation, than their peers, 83% compared with the average of 79%.

Community participation is one of the foundations of Muslim life.  Belonging to the ummah and taking an active role are key elements of mu’aamalat, the ‘action’ part of Islamic obligations. You have to roll up your sleeves and get stuck in.

On the one hand Muslims need to nurture ‘belief’, called ‘imaan’. Side by side with this must go ‘amal us saalehaat’, good actions.  This pairing is familiar to us from the verse from Suratul Asr. But a similar pairing that is repeated often in the Qur’an is the encouragement to ‘establish prayer and to give zakat.’

Zakat of course refers to charitable giving, giving away of the wealth that we have at 2.5%. This giving of wealth is obligatory.  But since we are not expected to just write a cheque and then sit idly by, I suggest that there is one further form of wealth that we have that we must give of, and that fits straight into the discussions of showing pride, loyalty and contribution to our communities.

The commodity that we rarely think to proactively donate is our time. It is rare and precious. Our personal time is a true sacrifice, and also is unique because it brings our skills with it. Money is not a substitute for the love, skills and dedication that a personal donation of time makes.

If a week is 168 hours, then 2.5% means only 4 and a quarter hours each week.  That’s about half a day – perhaps a Sunday morning teaching young children. Perhaps an afternoon helping elderly people do their shopping. Maybe it means volunteering on a charity drive once a week. Or you could go to a local charity and help with fundraising or admin.  Or maybe it’s a phone call every day to someone housebound who could do with some social interaction.

Giving away our money is indeed noble and we must do it. But we also need to give of our time. This ‘hands-on’ contribution is good for our own souls and selves. As the report shows, it grows our love for our communities. And it makes us more humble and insightful of the world. More importantly it is crucial for those around us. If we want to grow our communities, money is important, but time is even more necessary.   Each week when we plan out our schedules, we need to factor in that 2.5% of our time should be given in zakat to the community.