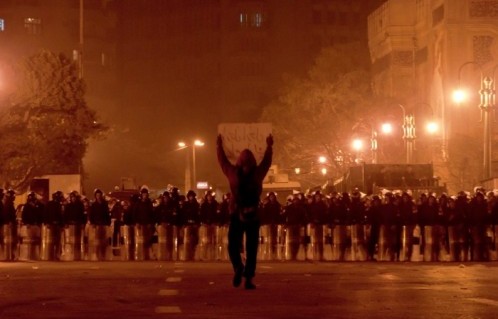 The International Peace Institute at the United Nations in New York City inaugurated its “Arab Intellectual Series” this past week with a panel featuring Libyan novelist Hisham Matar and Yemeni novelist Ali Al-Muqri. The series aims to explore the role of Arab intellectuals, in particular novelists and poets, active in revolutionary events taking place throughout the Arab world.

Moderator Abdullah Alsaidi, a Senior Fellow at IPI, opened Thursday’s event suggesting that what the West has termed the “Arab Spring” could be more accurately termed the “Revolution of Expectations.” He then called on both writers to speak about their roles as writers.

Matar responded first by identifying the threat a writer and literature pose to an oppressive regime. Both have the potential to be “wild” and can’t be easily controlled. Writers, he said, “hold up mirrors” to regimes. He provocatively suggested that dictators, like writers, can’t exist without creating narrative and story. To illustrate, Matar recalled videos he’d seen as a child in Libya, strategically alternating Gaddafi’s story with Mussolini’s. The dictator creates narrative in an attempt to rewrite history, to control, and to create intolerance for the “other” whereas the writer’s narrative impulse is fueled by desire to understand the “other” and to explore conflicted identities.

Dictatorships, he said, are “hard on novelists.” Writers pose a threat because they are rebellious, can’t be controlled, and provide “the music of discontent.” A wonderful country stands out of the way of its artists.

Regarding his role as a writer, Matar stated that the uprisings in Libya and its surroundings have created an opportunity for Libyans and the international community to better understand the world. People actively seek out his response. Throughout the afternoon’s discussion, Matar returned to the importance of re-establishing an honest cultural mythology. During times of such change, people need the arts. They remember the value of literature.

Al-Muqri referenced his first book, Black Taste, Black Smell, which encouraged protest in southern Yemen where people live in destitute conditions and are marginalized by a government that refuses to acknowledge them. His recent novel, The Handsome Jew, features a female protagonist who falls in love with the “handsome Jew,” symbolizing, in his view, a call for a new nation, rather than a mere revision of the same nation. Like Matar, Al-Muqri suggested that promoting tolerance and the desire to understand the other is a necessary part of any literary work of merit.

An audience member asked to what extent writers motivated or insinuated the youth with ideas, given the previous regimes’ level of censorship.

Matar responded by recounting his experience in a makeshift newsroom he created with colleagues in England after the uprising in Libya started. They made daily calls receiving reportage from young eye-witnesses. He noted that all participants took the task of presenting their own experience seriously, whether the viewer was a lawyer or a member of the public. Previously, documenting such events would have been impossible. The desire to publically connect through personal narrative represents “a drastic change in direction” and, during difficult hours, gave participants a sense of sanity and routine.

Jose Vericat of the International Peace Institute asked how foreign presence might influence or change the publically instigated revolutions in Libya and Yemen.

Instead of predicting an outcome, Hisham Matar reflected back, stating that historically, the West helped the Gaddafi regime “squeeze its people.” The implication was that Western governments believed the more they engaged with the corrupt regime, the more reform could be encouraged, a system that obviously never worked. Over time, people grew angry and cynical watching respectable countries treating their oppressors with respect. Returning to the importance of freedom of expression, Matar asserted that writers from Libya now feel connected to the outside world. He hopes this connection continues, and that the foreign presence will recognize the country’s emerging society and dialogue.

Another questioner asked about the audiences each writer envisions for his work and to address the idea of language. She pointed out that Al-Muqri writes in Arabic and Matar’s fiction is written in English and translated into Arabic.

Al-Muqri said he receives letters from throughout the Arab world responding to the impact his work has had on their lives, in particular, the black population in Yemen treated as outsiders. In his recent novel, The Handsome Jew, he stated that some of his readers misinterpreted the narrative as a response to the modern conflict between Arabs and Jews and a statement on the conflict in Palestine. In Al-Muqri’s view, the effect of literature and of a writer’s work is cumulative and must inspire opinion among its audience.

Matar responded that a writer who enables a reader to feel empathy for someone different has made a radical act. People forget this, he said. Addressing the topic of language, he asserted that in fiction, English affords him more distance and courage to write about what obsesses him. Using a second language offers restraint and necessary calm. He remarked that oppressive regimes use brutality to force writers’ voices either into silence or into a state of such anger, no one wants to listen. In the writer’s work, maintaining calm can be an act of resistance.

In a response to a question about how writers and artists have participated collectively during recent events, Al-Muqri stated that in Yemen, collective artistic expression continues to be part of the revolution in its many phases. In the main square, artists created drawings, wrote newspaper articles, organized musical activities, and on Facebook and cell phones, circulated satirical songs and video montages.

Matar responded that one of the most glorious moments of the revolution for him was seeing the 50,000 people who took over Benghazi sing word for word, a five-page poem written by a contemporary poet. Referring back to the threat writers pose to dictators, he noted that in 1977, the Gaddafi regime held a mock literary festival. All of the writers who participated were thrown in jail. In the past, when those writers came to London, they wouldn’t speak of their imprisonment, but since the uprisings, they aren’t afraid to speak in London about that experience. Gaddafi’s obsessive control of narrative extended to the Egyptian government, which was pressured to ban books and materials critical of the Gaddafi regime. Matar said that in Egypt, his childhood friends would “tiptoe” around the subject of his father’s disappearance, which became “a silent room” in their friendship. Such subjects can now be openly discussed. For artists and citizens, the potential for freedom has revitalized cultural life and artistic possibility.

A young activist from Libya asked the writers their views on the selective response from the UN and international society regarding which countries receive attention and financial aid. Hisham Matar acknowledged this disparity but responded that all parties should see these events as an “invitation to maturity.” For those within these actively changing societies, these uprisings have resulted in an anxiety about the future. In Matar’s opinion, this anxiety is revelatory and represents an important shift. With the old regime, he, like others, always knew exactly what to expect. Living with anxiety and learning to continue with not knowing is a sign of a maturing society. For the West, these events offer an “invitation to maturity” through an opportunity to revise how it views Libya and its citizens. For the first time in centuries, Matar stated importantly, the West is looking to the East for examples of liberation and how to act toward change.

Al Muqri responded to the questioner with the statement that the protests in Yemen shattered the idea that cultures can exist without free contact with the other or the outside.

A final questioner asked both writers to define the “talent” or genius of the people involved in the revolution. Al-Muqri stated the genius that lies behind recent events has been made evident through the collective work of activists in Yemen, particularly those of varying ideologies, who in the past have been polarized. He stated this result will have lasting effect though he is not optimistic that the remnants of the old regime who still maintain power will peacefully step down.

Matar remarked that the genius of his people was evidenced by their audacious acts of courage and bravery that resulted in the end of a militant 40-year rule. As the Gaddafi regime shamelessly attacked mosques and raped citizens of both genders, the genius of the young people continued, even when faced with death. Citing the numerous committees and magazines that have emerged since the revolution, he said people have been waiting forty years to be heard. Genius lies beneath the hunger for life that remains even after one of the most intense “dictatorial projects” the world has seen.

The next panel in the International Peace Institute’s “Arab Intellectual Series” will feature writers from Tunisia and Egypt.

Jennifer Sears is an author and instructor who lives in New York City.  She can be found at www.holisticbellydanceproject.com.