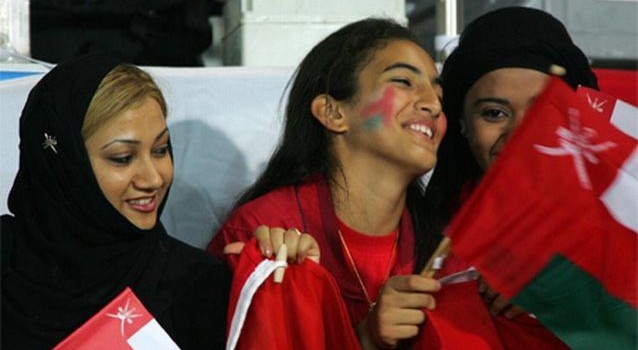 A few days ago I just happened to be in an office with a few colleagues (male) after a meeting and one of them joked about Oman being ranked second in the Arab World  for women’s rights, etc. Yes I can personally attest to the fact that Oman is an awesome place for women… BUT, that doesn’t at all mean we can pretend problems don’t exist (a technique we all know so very well). Since they brought it up, I started pointing out that there are definitely things that require improvement in Oman.. but that we’re on the right track.

They casually told me that nothing requires improvement and that Oman and Islam have granted women every right they need. I started listing the things that I felt stood in the way of female empowerment in Oman (Examples: the right to marry/divorce, freedom of movement, the right to marry a non-Omani, and the huge societal pressures that block women from living the life they want… particularly in conservative areas of Oman like Dhofar).

These colleagues I was talking to are western-educated and spent a considerable amount of time abroad. They see themselves as ‘open-minded’ and ‘liberal’. Both had girlfriends their ‘abroad lives’ and female friends, etc, etc. You know, the typical Omani scenario. But they came home to Oman, married their first cousin, and live completely traditional lives.

To my horror, they flipped and point-blank accused me of promoting ‘Western ideologies’ in Dhofar and warned me of how dangerous it is. To them, women in Dhofar shouldn’t be working and mixing with men because “a little freedom will lead to huge corruption” (an exact quote). To them, a woman’s place is at home because if she works, her children will be raised badly. To them, allowing women to drive means giving them the freedom to date and move around as they like (the horror!). To them, promoting women’s right to divorce is absurd (currently an Omani man can divorce his wife in court without her knowing, and the court doesn’t even bother to make sure she knows – same goes with marriage). To them, female empowerment will ‘destroy society’.

So, yes Omani legislation may grant women their ‘rights’ (Oman ratified CEDAW in 2005 with reservations on several articles not in line with Islamic Sharia law) but in Oman, I’ve said it and I’ll say it again “Society is more powerful than the law”. If your brother or father or uncle or husband decides you can’t work, then forget any dreams of working. If they decide you’re not allowed to study, then forget about it. If they don’t let you drive, then you don’t drive. If they don’t let you go anywhere without a chaperone, then you aren’t going anywhere. The list is long, but this is how our girls in Salalah live. This is their reality.

These men told me that girls aren’t ‘trustworthy’ or ‘responsible’ enough to be given freedom. THEY SAID THAT. I asked them why; they answered that this is how women are. I told them if they raised their daughters differently things will change. They said society will never change. I disagreed.

These men at work accused me of ‘living in an unrealistic bubble’ and ‘promoting western ideologies’. Since when has making my own choices in life been a western and unrealistic ideology? I humor society by being timid and quiet in public, by wearing the black abaya, by attending the social gatherings required of me…. etc. Yet I still have the freedom (thanks to my family) to work, drive, travel, run my own errands, and make my own decisions. They raised me differently. I told my colleagues that this is possible for all girls. Change is possible, if slow.

The conversation took a turn for the worse when they told me that my ideas were un-Islamic and that Islam grants women full dignity ‘within the four walls of her home’. I chose to end the conversation at that since I don’t want to delve into any discussion of Islam with people who have mixed up cultural values with Islamic ones. My Islam is different. My faith in God is strong, but I am not afraid of using my head to challenge myself and the traditions I grew up with.

As you can see, the conversation with these colleagues upset me. It ruined my mood for the rest of the day and had me thinking. Deep inside me I know change is coming and that it’s possible to live life to the fullest without giving up religious values. I don’t agree with the current lives girls live in Salalah, a life dictated by ‘society’ and ‘what will people say’, and when the girls attempt to challenge society then religion is brought in as the final force to shut these girls up and keep them behind closed doors.

So…. no, things aren’t all peaches and cream in Oman.

I’m sorry for sounding so negative, but that whole discussion left me with a sinking feeling in my stomach. It was a reminder of the society I live in.

2 Responses to Women’s Rights in Oman: A Depressing Conversation