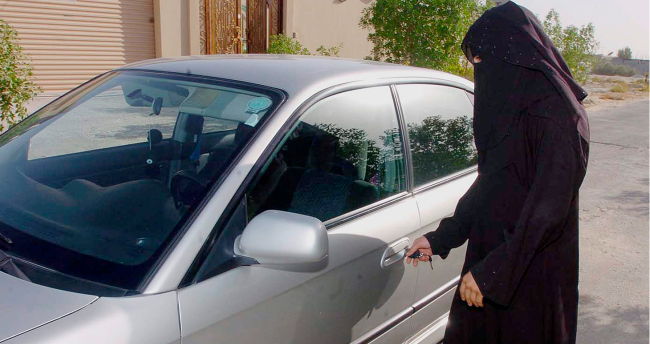 Writing at Al Arabiya TV, Saudi lecturer on Social Studies Badria al-Bishr takes exception to the (unnamed) Shoura Council member who stated that the issue of women’s driving is a ‘waste of time’. While the male-dominated Council may be able to prevent or postpone raising the issue for debate, it cannot stop Saudi women from making their feelings and beliefs known. In advance of the Oct. 26 planned protest, Saudi women are getting behind the wheel, having their driving documented, and posting the results on social media. It’s not just young hot heads, either, as grandmothers carting their grandchildren around are also taking part.

This is, of course, an issue that Saudi society needs to resolve. The government could certainly do more, but until public attitudes change sufficiently, it’s going to be a struggle.

The issue of “Women behind the wheel” has found its way to the forefront of domestic issues. Women have decided not to wait for the matter to be settled. After two historic attempts, women have decided to hit the road on October 26th, put the pedal to the metal and go forth to accomplish their aims by themselves. They will record videos of themselves driving on their smartphones and upload them, within minutes, to a YouTube channel.

A therapist drove a car by herself and went to her clinic; she videotaped herself saying: “I will drive my car by myself.” Another woman went out, brought her grandchildren home from school and said: “My son-in-law is an employee and we do not have a driver these days.” A third woman, who did not say anything and remained unknown, drove skillfully on the highway. What was surprising is that traffic police did not apprehend her! Then, we heard that other women were arrested and asked if they had driving licenses – as per the law – but were then released. They told the press that the traffic law does not prevent women from driving, but it requires a driver’s license. This is of course another mystery for women to solve: “Where can they get licenses when there is no driving school that will grant women a license?”
…