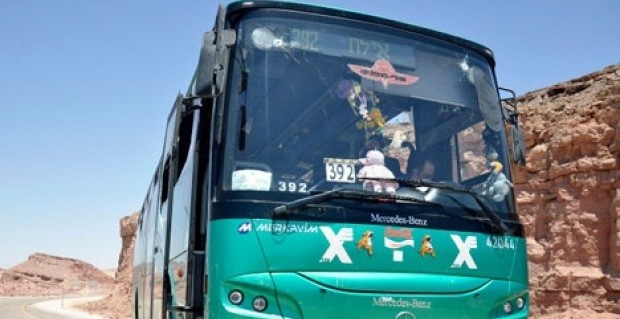 When we ride public transportation, we are simultaneously moving and stuck. As an American traveling in Israel, I have started to use this time to become unstuck – to understand more about the people living there instead of relying on stereotypes.

Riding the bus from Eilat to Tel Aviv last month, a young freckled soldier takes the seat next to me. I ask him where he is serving. He is vague and says he can’t tell me, it is highly classified. Written, it sounds ridiculous, as if he is pretending to be a spy, but in person it is said so politely and casually, I believe him. He is boyish, young but mature, lovely, thoughtful. He has a red beret tucked neatly in the epaulette of his army uniform, which has two bars on the shoulder. I know this means he is a captain in a paratrooper unit – so young-looking, yet a captain.

He asks me what brought me to Israel, shifting the focus of the conversation away from him. At this point a man in his late 20s gets on and asks to sit in his seat – he has the ticket to it. The soldier moves to get up, and then the man notices the step in front of our seat. He tells the soldier to stay put and sits on the step. The men argue for a moment, each insisting the other take the seat near me. The man sitting on the step explains, “You should have the seat; you are a soldier.” At this moment I realise he too has a story to tell about his relationship to the army, one of gratitude and guilt. The soldier stands up and puts his hand on the older man’s shoulder, gently commanding him to take the seat, turns to thank me for my conversation and moves to the back of the bus.

Now I am determined to unearth the story of the man sitting next to me. I wonder about his conflicted relationship to the army. I ask, “Were you in the army (the Israeli Defense Forces)?” The man, whom I will call Roni, laughs, and tells me he gave nine years to the army as a career soldier, but following a motorcycle accident, he was discharged even from the mandatory yearly reserve duty. Gripping his thighs, he tells me he has metal rods in his legs. I ask Roni for his view about the situation of Arabs in Israel and he gives me the classic Israeli diplomatic answer: “We are all sons of Adam; we are all human.”

Roni’s father was born in Syria and his mother’s parents were from Iran. He tells me he focused on Middle Eastern Studies at university. I share that I did too, so he starts to speak in Arabic. His Arabic is spoken so beautifully, like the waves of the Mediterranean Sea. We have a conversation and the Arabic flows from me, words that have not come out of my mouth since university somehow find passage through my vocal chords. He tells me he has a brother who can’t stand the sound of Arabic, but we both agree it is a beautiful language.

Roni worked as an interpreter for economic conferences in Taba, an Egyptian resort on the Egypt/Israel border, translating Hebrew to Arabic for people from many Arab countries. It intrigued me that economists succeeded in bringing Arabs and Jews together by meeting in Taba, a local neutral territory. Roni beamed with pride as he told me the Arab participants later complimented him that his formal Arabic was more fluent than their own. It wasn’t just the language he translated for them. Roni was a living bridge between the two cultures. In him, Arabness and Jewishness resided respectfully. He dedicated his life to defending the Jewish homeland and immersing himself in Arabic language and culture. I am surprised to hear that his Jewish father, who moved here at age 15, longs to return to Syria, as he is more comfortable with its traditional values.

This man’s stories challenged some of my assumptions about soldiers and Syrians. I wonder if we relied less on conventional narratives of Arab-Jewish relations, and instead became interested in the person sitting next to us on the bus or train, that we might also move forward together metaphorically to arrive at our desired destinations.

Ariel Katz is an American living in England. She studied Middle Eastern Studies at Cornell University in New York, and lived in Israel for three years working in Arab-Jewish relations.