What Happens If Syrian’s Christians Leave? 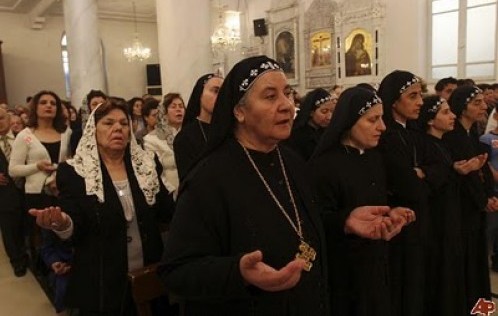 Twelve years ago, I travelled to a monastery in the Syrian desert, where I met an Italian priest by the name of Father Paolo Dall’Oglio. For 20 years, he had been living in rural Syria, serving as the abbot of the ancient monastery of Deir Mar Musa. There, he led a community of Arabic-speaking monks and nuns dedicated to prayer, hospitality, manual work and dialogue with Muslims. As I settled in I was astonished to notice Muslims visiting all day, admiring the church frescoes, joining the local Syrian Christians for lunch, even excusing themselves so that they could perform their prayers in a quiet corner of the monastery grounds. I had never seen love between Muslims and Christians embodied so effortlessly, a communion of human beings sharing daily life.
Over the following years I came to know Father Paolo well, and grew accustomed to the Muslims who visited his monastery almost daily. Father Paolo told me stories. He spoke of Muslim sheikhs who came to discuss their faith, of Muslim visitors who arrived bearing gifts – one prominent Muslim artist even sculpted a cross for the monastery – of meals and songs and fears shared between faiths. He quoted the Qur’an as easily as the Bible. To Christians, he told stories of Muslims and their love of Jesus, Mary and the Prophet Mohammed. To Muslims, he told stories of the respect early Muslims had for Christian monks.

Last year, as the crisis in Syria escalated, Father Paolo publicly called for reconciliation in an attempt to avoid civil war. In late November the government issued an order for his expulsion.

For weeks I was haunted by what Father Paolo’s expulsion would mean for Syrian Christians. The conflict in Iraq had already led to the exodus of more than half of the country’s Christian population. The threat of a mass exodus in Syria was equally real – for they had been placed in an impossible situation. As minorities protected by the government, local Christians were terrified of a civil war that would leave them vulnerable to Muslim extremists, just as they were frightened that if an Islamic party took control of the country, their rights would no longer be recognised. Yet now the government was demanding they silence themselves and abandon the Christian principle of confronting injustice and working towards peace.

Eventually, Father Paolo was allowed to stay in Syria after he promised that he would not speak about politics.

When I talked to him two weeks ago, the monastery, always crowded, was almost entirely empty.

It is not up to me to ask the Syrian Christians to stay, but I cannot be silent on the matter of what will be lost should they leave. Nor can I avoid the price of their silence. Much has been written about the destruction of antiquities in Baghdad. Yet as the conflict escalates and becomes sectarian in Syria, something even more precious might be lost there: centuries of stories of Muslims and Christians living together.

These stories were not only Father Paolo’s to tell. They are deeply embedded in the culture: tales of the monk Buheira, who tradition says met the Prophet Mohammed in southern Syria; stories about Muslims and Christians visiting the monastery of Seidneyya together to honour Mary or seeking the remains of John the Baptist at the Umayyed Mosque; of meals shared and prayers offered in proximity to one another.

The death toll in Syria mounts. The likelihood of exodus increases. Daily, in our helplessness, we are faced with the question of what we might do.

We can tell stories. Tell a story of Muslims and Christians living together. It may be the smallest form of resistance – and yet resistance it is. It battles the dangerous narrative of Muslims and Christians destined to be at odds with one another. It gives Christians, the receptacles of these stories, a reason to stay in place. It creates and restores in a moment what so many forces seem bent on destroying. It gives voice to those storytellers who now feel compelled to stay silent.

Come, let me tell you a story.

Stephanie Saldana is the author of The Bread of Angels: A Journey to Love and Faith, a memoir of her life in Syria. She teaches at Al-Quds Bard College in Jerusalem.