What does it mean to be a Muslim man? 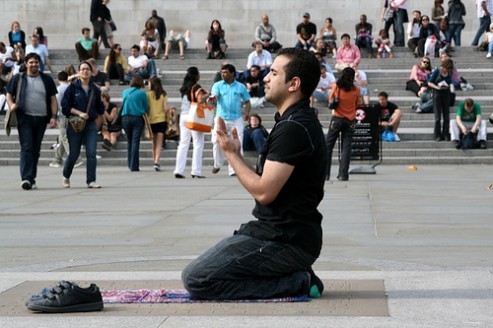 Last week my sister called.  She has been studying abroad since summer began, so naturally I was thrilled to hear from her.  After hearing how she was, I asked about her new home.  With her living in a Muslim country, I felt assured that everything would be fine.  For that reason, what she described next was a complete shock.  She began to describe a place where a girl can hardly leave her house without being verbally harassed by men walking by.  She said that the catcalling was no longer the exception; it had become the rule. Then she told me about a Muslim girl she knew.  The girl was riding in a taxi and when she arrived at her stop, she handed the driver his money.  In many of these countries there are no strict meters, and since the fare is somewhat arbitrary, the driver became angry.  Eventually the altercation escalated to such a degree that the driver grabbed the girl by the shoulders and began to shake her.  At this, the girl became angry and insulted the driver.  The driver then punched the young woman in the face.

At this point, I was extremely disturbed.  But it was what my sister said next that was most devastating.  Nearby, there was a group of men who saw what was happening, and rushed to the scene.  Naturally they came to help the girl.

No.  They stood and watched.

It was at this point in the story that I began to wonder.  Suddenly I found myself questioning every definition of masculinity I had ever believed in.  I wondered how a man — not one, but many — can stand and watch a woman be abused, and do absolutely nothing about it.  It made me question what ideals define what it means to be a man in today’s society.  Had the definition of masculinity become so distorted as to be reduced to just unbridled sex drive?  Had the image of the ‘knight in shining armor’ really been replaced by visions of macho, catcalling boys in the street?

Most of all, it got me thinking about what it means to be a Muslim man today.  I wondered if our dominate definitions as Muslims are really what they should be.  Today, a man is expected to be stoic, unemotional, inexpressive, tough, and unbending.  Physical aggression is glorified and emotional expressiveness ridiculed. I then decided to examine the epitome of what it means to be a man.  I decided to look at the Prophet ?.

One of the most common definitions of manhood today is the lack of emotional expressiveness.  It is almost universally believed that to cry is ‘unmanly’ and weak.  And yet the Prophet ? described it very differently.  When the Prophet ? was handed his daughter’s son who was dying, his eyes flooded with tears. His companion Sa`d then told him, “What is this, Prophet of God?” He ? said, “This is a mercy that the Almighty has made in the hearts of His servants. And surely God has mercy to the merciful ones among His servants.” [Bukhari]

But today, a man is not only expected to hide feelings of sadness, he is taught early on that even other emotions are not to be expressed.  During the time of the Prophet ?, there were some men who believed the same.  Once while a villager was present, Prophet Muhammad ? kissed his grandsons on the forehead.  At that, the villager said with surprise, “I have ten children.  I have never kissed any of them!” Prophet Muhammad ? looked at him and said, “He who does not have mercy will not have mercy upon him.” [Bukhari] In fact, with regards to showing affection, the Prophet ? was very clear.  He said: “If a man loves his brother in faith, he should tell him that he loves him.”[Abu Dawud]

The Prophet ? used to also show a great deal of affection towards his wives.  Aisha reported that the Prophet ?would only enjoy his meals when she would sit next to him.  They would drink from one cup and he would watch where Aisha would place her lips on the cup so that he could place his lips on the exact position.  He would eat from a bone after she would eat from it, placing his mouth where she had eaten. [Muslim]

The Prophet ? used to also help around the house, contrary to another widely held myth of masculinity.  Aisha reported, “The Prophet Muhammad ? used to stitch his clothes, milk the goats and help in the chores inside the house.” [Bukhari & Muslim]

But, perhaps one of the most common myths of what a man should be is the idea that a man should be ‘tough.’  Gentleness is widely considered only a feminine trait.  And yet the Prophet Muhammad ? said: “Allah is gentle and loves gentleness. He gives for gentleness what He does not give for harshness, nor for anything else.” [Muslim] In another hadith, he says, “He who is deprived of gentleness is deprived of good.” [Muslim]

And yet so much of that gentleness has been lost from our modern definition of masculinity.  It is frightening when a boy can consider it manly to sexually harass a woman on the street, but consider it no question of his manhood to stand and watch while a girl is being hit.  It makes you wonder if maybe our image of what is ‘manly’ in fact resembles a Hollywood gangster more than it does our beloved Prophet.

This article is published courtesy of SuhaiWebb, a site dedicated to moderate Islamic teaching.

3 Responses to What does it mean to be a Muslim man?