Water Not Oil is the ‘Big Issue’ Facing Kingdom 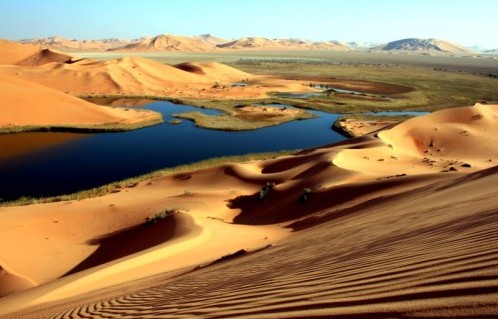 Oil, as Saudi Arabia’s primary export, is the basis of its economy. Even more basic, however, is fresh water. Without water, there can be no Kingdom of Saudi Arabia. Demand for water in the Kingdom is growing at a rate of 7% per year as a consequence of both a growing population and a broadening economy. As it stands, Saudi Arabia uses nearly twice as much water as the US, per capita, and the US, with plentiful rivers and rain, is not on a stringent water regime. The trend, if not addressed, means that Saudi Arabia will run out of water for all purposes.

Arab News features this Reuters piece looking at the current situation and its near-term futures. There’s a serious problem on the horizon. According to the article, Saudis are now burning twice as much oil for all purposes as they did in 2008, the most recent available figures. A significant portion of that consumption comes from desalinating water. Most of the water used is going to agriculture, the article notes, but there is little control over the agricultural sector and its use of water. While the Kingdom did away with its inefficient wheat growing subsidies a while ago, farmers shifted their crops. Unfortunately, many of those crops require far more water than did wheat.

The article addresses several areas in which the Saudi government can act to rein in Saudi demand for water, including the raising of the price of water to consumers. That, the article says, has to be done carefully.

One of the arguments the Saudis use in calling for nuclear energy in the Kingdom is that electricity from nuclear generation is cheaper than the oil it needs to burn to produce desalinated water. It’s a good argument from the supply side. There’s also an argument that the demand side needs to be reduced. This wouldn’t do away with the need for water, but it would put less strain on the system.

ALKHOBAR/LONDON: Long before it understood the value of oil, Saudi Arabia knew the worth of water. But the leading oil exporter’s water challenges are growing as energy-intensive desalination erodes oil revenues while peak water looms more ominously than peak oil — the theory that supplies are at or near their limit, with nowhere to go but down.

Water use in the Kingdom is already almost double the per capita global average and increasing at an ever faster rate with the rapid expansion of Saudi Arabia’s population and industrial development.

Riyadh in 2008 abandoned what was in retrospect clearly a flawed plan to achieve self-sufficiency in wheat and aims to be 100 percent reliant on imports by 2016.

“The decision to import is to preserve water,” said Deputy Minister of Agriculture for Research and Development Abdullah Al-Obaid. “It’s not a matter of cost. The government buys wheat at prices higher than in the local market.”

Critics complain the policies are still not joined up, however, and say the risk is that Saudi farmers will turn to even thirstier cash crops.