Warmth and Hospitality: My Memory of Tamimi Family 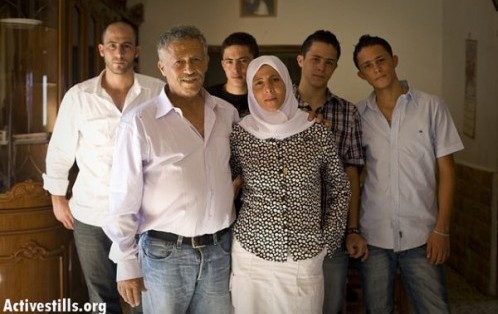 As those who have traveled in Palestine know, everywhere you go you are greeted with incredible warmth and hospitality. My short time spent with the Tamimi family in the tiny village of Nabi Saleh was no exception. Now, this family is grieving over the needless death of 28-year-old Mustafa Tamimi, (pictured far left) who was shot in the face at point-blank range by an Israeli soldier. Below are my reflections from a summer night in Nabi Saleh, where I met Mustafa.

It was another hot Ramadan day last August, and I had one day left to continue my reporting from the West Bank on Palestinian popular resistance and the UN statehood bid (see my article, “September uprising? Hopes, prospects and obstacles for Palestinian popular struggle,” in Mondoweiss here). I had spent two days reporting from the village of Beit Ommar, and then went to Ramallah, Nil’in and finally Nabi Saleh.

I didn’t know anyone there; Hassan Mousa, an activist from Nil’in, gave me a village resident’s phone number, and it was popular committee member Bashir Tamimi who I reached, who told me to come. I arrived in the early evening, and met a man, Iyad Tamimi, who spoke English extremely well. Most of the residents of Nabi Saleh come from the Tamimi family.

Iyad, a bald middle-aged man, took me to his house, and after talking, we figured out that his sister lived in the city I grew up in.  The call to prayer soon came, and Iyad, before leaving for the mosque, directed me to follow someone else to dinner. This was the home where Mustafa Tamimi lived.

There were no questions asked when I arrived to the house; I was a guest, I would eat a delicious meal with their family, and I would stay there overnight. The Tamimi family took me in with open arms, despite the fact that I barely spoke Arabic and was a stranger. This, I’m sure, is a common experience for those who visit Nabi Saleh.

After dinner, more and more people began to arrive. We migrated outside. We smoked nargileh, drank tea and talked politics. A Real Madrid v. Barcelona soccer game crackled over a radio. I peppered Iyad and Bashir with questions about Mahmoud Abbas, the Palestinian statehood bid, and their struggle against the occupation. Overlooking us were the uniform red-roofs of the nearby Halamish settlement, whose confiscation of a nearby spring in December 2009 had led the village to begin weekly demonstrations in the face of brutal Israeli army repression. But no matter; despite the constant reminder of the settlement, smiles and laughs abound. The Ramadan iftar is always a joyous occasion, in Nabi Saleh as elsewhere. The Israeli army and settlers they protect can’t stop that.

Mustafa was there. I didn’t speak with him too much that night, but the next morning he gave me and his mother a ride to Ramallah, and he showed me where to catch the bus to Jerusalem. Again, no questions asked; Mustafa was kind enough to make sure I knew where I was going.

But if there’s hope, it comes from the Tamimi family and others like them. The resistance against occupation continued today, with hundreds of mourners attending the burial of Mustafa. The Israeli army turned their tear-gas on them once again, and beat and arrested activists.

It’s clear Mustafa would be proud. His spirit will live on in his family.