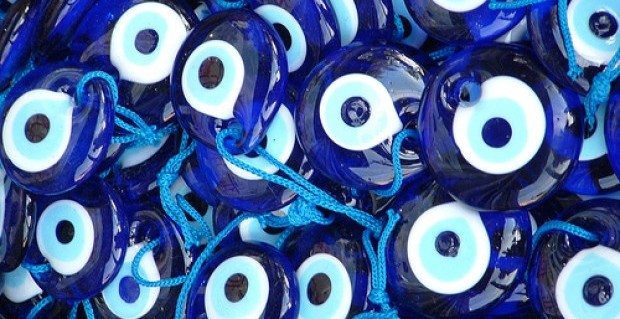 A few weeks ago I was sitting with a group of women from my extended family sipping tea and exchanging tribal news. One woman was asked about her newborn granddaughter.

The grandmother immediately started speaking loudly ‘the baby has dark skin and big ears! She’s so ugly!’ All the other women nodded. I sat up furiously and said ‘Hey, that’s not true. She’s absolutely adorable!’ I had been holding the baby a couple of days earlier and she was one of the sweetest bundles of joy I had ever seen.

The protective grandmother gave me a furious look. My mother nudged me and whispered ‘You’re not supposed to say that’, so I settled back down into my chair and let them get on with the conversation. I had forgotten about how superstitious my family is. The woman was simply trying to protect her grandchild from the evil eye.

Although superstitions are a big part of our culture here in Dhofar and in other parts of Oman as well, the evil eye isn’t just superstition. It is considered an everyday hazard. If you’re not familiar with the concept of the evil eye, it is a ‘look’ that is believed to be able to cause harm or bad luck for the person at whom it is directed. It is often fueled by envy.

In Islam, the evil eye is a common belief that humans have the power to look at other living creatures or objects to cause them harm. Although talismans are not commonly used as protection among Muslims, certain verses from the Holy Q’uran are used to ward off the evil eye. It is also a tradition among us that if a compliment is to be made you must say ‘Masha’Allah’ (God has willed it) as protection against such evil.

In Dhofar, many locals believe that the evil eye can bestow a curse on victims and may even cause death. In fact, I have heard of a few people in this town who are actually well-known for the power of their evil eye. Apparently, they have a history and many eyewitnesses to prove it. Sometimes I think my people find it hard to distinguish between the evil eye and hardcore black magic. Salalah is a peculiar town when it comes to dwelling in the unknown.

For the first few months of a baby’s life, it is not uncommon to see small amulets containing verses from the Q’uran pinned to the child’s clothing. Babies are thought to be the main victims of the evil eye especially when praised by childless women or strangers.

I remember an incident a year ago when I smiled at a baby in the middle of a supermarket in Salalah. Its mother saw me and immediately grabbed my arm and said ‘Say Masha’Allah! Say Masha’Allah! Quick!’ It took me a few seconds to realise what was going on before I could mumble the words and put her at ease.

Remember my last column on the bridal fiasco? During our three hours with the makeup artist, I had to sew verses of the Q’uran into the bride’s wedding gown to protect her from the evil eye.

Other common practices include slaughtering an animal at the door of your newly built house to ward off evil. When buying a new car, locals often play recorded Q’uran CDs in it for the first few days to protect it from envy. Until recently it was not uncommon for Dhofaris to slaughter animals before harvest in order to pour their blood into water springs and throw scraps of flesh throughout their fields to ward off envy.

Naturally, I am a little superstitious as well because it’s part of my Dhofari upbringing. However, I most certainly do not let it affect my day to day life. I’m sure there are plenty of evil forces out there, but I choose not to obsess about them!

One Response to Warding Off the Evil Eye: Omani Superstitions