‘Wadjda’: Is It The First Good Saudi-made Movie? 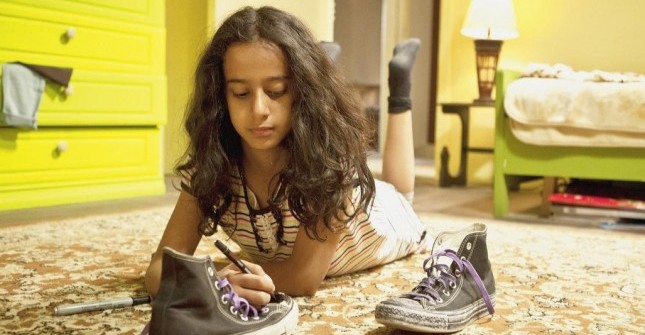 Thanks to friends, I finally got a chance to see the movie Wadjda. It is supposed to be the first Saudi movie but I’ve heard that at least twice before; once with Rotana’s movie Kaif Al Haal and another time with a movie based on a Saudi TV show called Manahi. So technically it’s not really the first but I would say that it’s probably the first good Saudi movie. Finally a movie that gives you an authentic flavor of a country where 70% don’t own their own houses, and where women are educated to work in hospitals and schools but then shackled with guardianship laws and a driving ban. And it does it with just the right amount of subtlety that you end up rooting for the stars, rather than feeling sorry for them.

Wadjda is a spunky 11 year old girl who goes to a neighboring public school and as part of growing up as a Saudi has to watch her mother struggle with the threat of her father becoming polygamous. She gets it into her head that she needs a bicycle but she doesn’t have the money to buy one. So she enters into a Quran recitation contest at school. Yet there are a few things I would change about the movie. First of all it’s made out that it’s normal to punish students in public schools by making them stand outside in the sun. I have never heard of that happening except in the military as a punishment for soldiers. We’re Arabs, we know what the sun does. That’s why long before sunscreen, we cloak ourselves and cover our heads and face when out in the sun. We would never leave a child outside in it. Another thing is the school uniforms. The uniforms are now two piece and have been for at least the past three years. Finally I would get a better translator. The current English subtitles missed parts and mistranslated others.

Otherwise I was completely floored by the movie. Even the parts of the Quran that were recited during Wadja’s practice and contest were just the right ones. It was definitely made by a Saudi woman. This won’t be a spoiler post. Instead I’m going to write about two incidents that I’ve experienced personally which the movie had reminded me of. The first is when it’s hinted that the principal of Wadjda’s school might be living a double life. I remember when I was in high school there was a particularly fundamentalist fellow student. She would get upset when we snuck in magazines at school and talked about our latest celebrity crush. A friend and I took the school-bus back then and there weren’t many within my age group that did. So we were surprised to see the fundamentalist putting on her abaya to leave by the bus gate. She didn’t go on the bus! We followed her and saw her sneak into a car with a young man and take a present from him. At the time her insincerity was extremely shocking to me.

Another incident that the Wadjda movie drudged up for me is listening to my mother try to convince her friend to not take her 10 year old daughter’s beloved skating shoes from her. The woman was telling my mother how she was constantly worried that her daughter might compromise her virginity in a fall.

If you get a chance to see the movie, I highly recommend it.