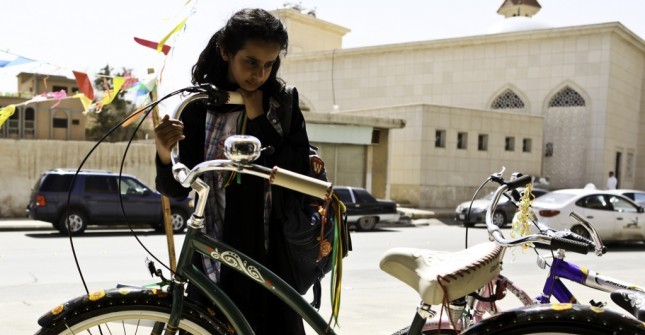 Thousands of young Saudis will soon be heading off to foreign lands for their summer holidays. Some are out of the Kingdom already, as their families take a break during the Holy Month of Ramadan.

The chances are that many of them will be heading to the movie theatres to catch up with the bumper harvest of summer blockbusters on offer from Hollywood.

It’s an irony that ‘Wadjda’  – the award-winning film shot in Riyadh about a young girl’s efforts to buy a bicycle – cannot be seen on a big screen by Saudis at home, since commercial cinemas are not allowed in the Kingdom.

Wadjda is a movie Saudis can be proud of. A couple of days ago I went to a preview in the UK. As I watched the nuanced and bitter-sweet portrayal of a schoolgirl negotiating the conservative social conventions that define her life, I was in an audience consisting largely the middle class and relatively well-heeled readers of the London Times. While none of the sub-plots that portray the place of women in Saudi society were news to me, I wondered how many eyes were being opened for the first time about life inside the Kingdom, even for those who regularly keep an eye on media coverage of the Middle East.

One thing that might have surprised them is the extent to which Western culture bumps alongside traditional ways even within the most socially conservative Saudi families. While Wadjda enters the school Quran memorisation competition so that she can spend the prize on her longed-for bike, at home she listens to western music and plays video games with her Dad.

The social themes in the movie would be as familiar to a Saudi audience as those portrayed inthe films of Mike Leigh or the plays of Alan Ayckbourn would be to a British audience.  And though the story was beautifully crafted and entrancing, I also wondered about the intended audience. Was director Haifaa Al-Mansour primarily making a point to her own people, to the rest of the world, or both?

The reality of life for women in Saudi Arabia’s conservative heartland is woven into the story. That it is shameful for women to be seen by men – let alone interact with them – unless they are related to them. That the girl’s schools are often harsh and prescriptive, and run by women fully supportive of the Kingdom’s “customs and traditions”. That for men, having sons is a social imperative, and cause enough to take a second wife if the first cannot deliver. That there is a range of activities, including riding a bike, that are deemed unsuitable for women. That young girls upon reaching puberty are often married off without having much choice in the matter. That even among the less wealthy, foreign labour – in this case a South Asian driver – is essential if a woman is to work. That female teachers often have to travel long distances to reach their places of work.

The art of the movie is that it draws us into that reality without making overt statements that might offend the home audience. Apparently the director did receive death threats, but these are a fairly common currency of intimidation from extreme conservatives, usually anonymously through the social media. Still I find it amazing that we are offered this unveiled glimpse into a Saudi woman’s world – in Riyadh of all places.

But in the end, it’s only a movie. A simple story that will have been far from simple to bring to the screen. A tale of love, sadness and feisty individualism. No sex, no violence, no CGI, no cataclysms.

Just a beautiful movie that I heartily recommend to Western film fans – whether they are familiar with the Middle East or know little of the region and need convincing that Saudi Arabia is not a society of wife-beating ogres, even if its values and culture are very different from ours. Wadjda opens in UK cinemas on July 17th.

It’s a measure of the evolution of Saudi society that the movie was even made, and encouraging evidence that the cultures of the West and the Middle East will continue to develop to the point that they no longer grate on each other. That point may be a while off, but I’m convinced we will get there.

Best of all for this jaded movie goer, it’s a reminder that there is an alternative to movies like World War Z, even if Hollywood has turned into a crass and predictable blockbuster factory.

On a festive note, this is an appropriate place to wish all my Muslim friends a joyous and peaceful Ramadan.