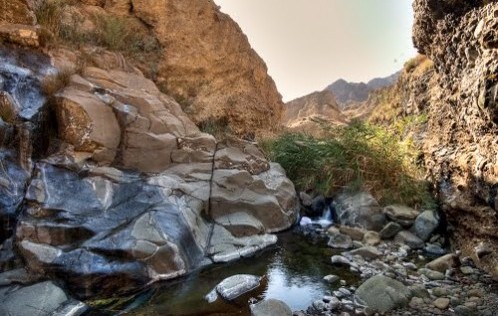 It’s been a while since Wadi Wurayah has been in the news. In fact, as far back as this totally pointless piece in the now (you can see why, too) defunct EmBiz24x7.

But now it’s a 7Days front page splash! OUTRAGE AS VANDALS SPOIL BEAUTY SPOT trumpets the terrific tabloid. Actually, I hate to tell you this guys, but Wurayah has looked like it escaped from LA Ink since the early 1990s, when a road was built that turned the former 19km offroad drive required to get to Wurayah into a two minute saunter in the old Tiiida.

Wurayah is the only year-round waterfall in the UAE and a site of very real natural beauty. If you nip up to the top of the waterfall there’s a little bowl you can sit in and let the cool water run over you as you lie back and reflect that yes, it is indeed Tough In The Gulf. You used to get to it by turning off the Khor Fakkan road by a wrecked aeroplane (well, until they removed the wreckage, which caused a lot of readers of Motivate’s Offroad in the Emirates more than the odd problem. Mind you, we found more lost travellers in Hatta after the track cited in the book was washed away. Motivate continued, of course, to sell the book!) and trundling up wadi beds in your 4x$ to get to the waterfall.

We went up just after the new road was built and the wadi was already strewn with graffiti and the pools at the base of the waterfall contained rubbish – tin cans and broken glass. We found a man there, camping. He had a light bulb on a pole in front of his tent and a generator to light it, which was causing a terrible racket and stank. That was back in 1990-sometihng.

Today’s outrage is a tad overdue…