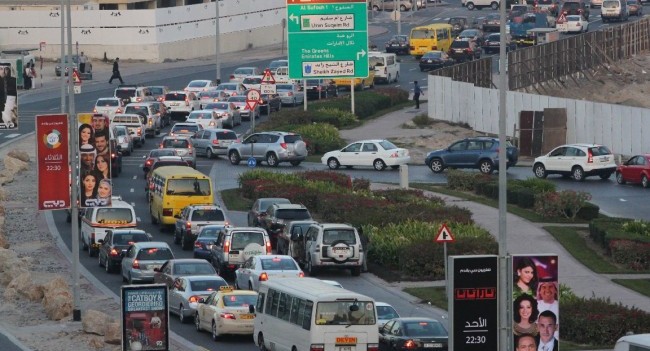 The car dealers are rubbing their hands, gleefully cackling and singing ‘happy days are here again’ in their broken, wheezing voices. As miserable a bunch of avaricious hunchbacks as you’ll find, the saggy-skinned troglodytes in suits are hearing the sound of tills ringing and they have pronounced the sound To Be Good.

It is within the pages of the mighty Gulf News today we are told that Dubai has increased new vehicle registrations by 10% year on year. That’s presumably a sign that we’re seeing a 10% increase in vehicles on the road – a total of 1,240,931 vehicles were registered with the RTA this year. Car dealers in Dubai and Sharjah have apparently told the newspaper of increases in new car sales of up to 40% and anticipate a continued strong growth trend.

One place there are less cars to be found than last year, incidentally, is the Sharjah/Dubai highway. Although it still gets gummy here and there, the traffic volumes are undoubtedly down as traffic concentrates instead on choking Al Wahda street because everyone’s trying to leave at Al Khan and hoy off over to the 311 (The road formerly known as the Emirates Road but now renamed the Mohammed Bin Zayed Road) to avoid shelling out Dhs4. I am constantly amazed at what lengths people will go to in order to save Dhs4 – including spending Dhs5 in extra petrol.

So Salik (the name of Dubai’s traffic toll system and Arabic for ‘clear’) has lived up to its name. Who knew?

The question is whether the expansion of the UAE’s road infrastructure will keep pace with the expansion in traffic. There’s a new arterial motorway planned to link the 311 down to Abu Dhabi, while a new road system around the Trade Centre Roundabout – started before the bust and now completed by Italian company Salini, which has somehow managed to ride out the recession and its significant exposure to Dubai – is opening this week. The conversion of the National Paints Car Park into a functional road appears to be nearing completion, too – it’ll be interesting to see if any number of new lanes can bring clarity to what was the UAE’s most notorious traffic bottleneck.

Meanwhile, property prices in Dubai rose by more than anywhere else in the world, according to a piece in The National, which identifies a 28.5% rise in the first nine months of the year.