Tim Mackintosh-Smith: Is He A ‘Yemeni National Treasure?’ 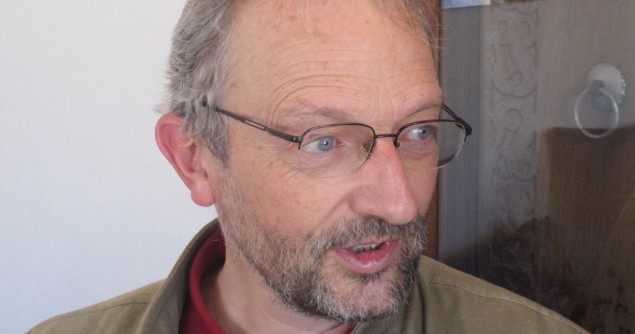 You know an experience has struck home when you wake up thinking about it the following morning. Cultural events rarely have that effect on me. Music and theatre: sometimes, cinema, almost never, art exhibitions, almost never.

I had one such experience the other evening. A moonlit night in Bahrain, a magical venue, and a middle-aged British guy talking for an hour about his favourite subject. One person and a slideshow. Not exactly a Skyfall experience.

But Tim Mackintosh-Smith is not the kind of Brit you meet every day in the streets of Manama, Dubai or Riyadh. He’s a travel writer with a career-long passion for the work of Ibn Battuta, who, in the 14th century, left his home in Tangiers to go on the pilgrimage to Makkah, and kept on travelling over the following 30 years.  Ibn Battuta went to the edges of the Muslim world – to West Africa, Spain, the Maldives, India and China, not to mention stop-offs all over the Middle East.

Ibn Battuta I know a little about. I have Tim’s edited version of the The Journey, the book the traveller wrote on the orders of the Sultan of Morocco when he finally made it home.

But I knew little about his disciple. It’s rare enough to find a Western Arabist in the Middle East outside of academia who uses his language skills for purposes other than commerce, politics or diplomacy. Even rarer to meet someone who has chosen to spend the past 37 years in the country his fellow travel writer Jonathan  Raban once described as Arabia Demens (demented Arabia) – the Yemen.

Tim lives in the heart of the capital, Sana’a – hardly an oasis of stability in a country riddled with problems – water shortage, political upheaval, kidnapping, youth unemployment and insurgency. It says much for his love of his adopted home city that he remained in situ during the events of the past 18 months, when the Yemen teetered on the edge of civil war. Life for a British resident cannot have been easy as Islamist militants lobbed grenades at the British Ambassador, and protesters took to the streets in an attempt to prise Ali Abdulla Saleh, Yemen’s long-serving President, from office.

No doubt he could talk for hours about the Yemen, the subject of one of his earlier books which I am currently reading. But his subject the other night was equally enthralling. Ibn Battuta was probably the best-travelled man of his age. Many others travelled extensively, but not so many returned. Travelling was a dangerous pursuit, and the man himself got into a number of scrapes including shipwreck, pirate attack and robbery.

If his account is to believed, he journeyed over 75,000 miles, and visited lands now occupied by 44 different countries. Many people over the past fifty years have travelled a similar mileage or more – myself included. But our journeys – whether as backpackers or dipping into one place or another from the comfort of a luxury hotel or cruise line – bear no comparison with his. There was no tourist industry in the 14th century. Ibn Battuta travelled by foot, by horseback, by camel, by river and by sea, through lawless lands and pirate-infested waters. He joined commercial caravans for safety, and occasionally attached himself to the courts of capricious rulers. And he lived through the Black Death, which accounted for up to 30% of the population of the known world.

What brought Tim’s talk alive was the modern connection he made with the places and people Ibn Battuta visited. The Malian musician who could trace his ancestry back to a personage mentioned in The Journey. The possible site of the Indian “suttee” (female self-immolation) described in the book. The bathhouse in Granada that he visited, still hiding in the basement of a modern hotel.

But more impressive than the content was the speaker himself. I’ve read my fair share of travel writing – Stark, Thesiger, Kapuscinski, Theroux, Raban, Thubron and Tahir Shah among others. But Tim Mackintosh-Smith was the first of the breed that I have actually encountered in person.

There is a bedrock of erudition and scholarship that underpins everything he says. That clearly comes not only from the fact that he is an Arabist, but though a deep immersion in the Arab world. He frequently drops into Arabic, but stops to explain in English despite the fact that most of his audience are Arabic speakers. He quotes Arabic poetry and literature from memory.  Yet he speaks with a lightness of touch, gentle humour and a humility that belies his achievements as a writer.

Why am I bothering to write about a lecture to fifty people by a writer who occupies a literary niche that will never appeal to more than a small proportion of book buyers? Because the motivation that led him to live in the Middle East is, I suspect, essentially the same as mine. He is different from me in many ways. He has immersed himself in the culture in a way I never did. He has vastly superior linguistic and writing skills. He has committed to a way of life in a way I never did. I envy him for all those things.

But here’s what I feel we share. A love of history, an affinity and appreciation of the underlying culture of the Arab world and a desire to be here entirely unrelated to financial gain That might sound strange coming from someone who has been in business for most of his life. But believe it or not, my reasons for coming back to the Middle East five years ago had nothing to do with the need to earn a living, and everything to do with a sense that the decade I spent in the region years ago was not enough. For me, there was unfinished personal business, and no matter how long I stay in the region, I doubt if it will ever be finished.

Wherever I travel in the Middle East I see vulgarity, greed, hypocrisy, bigotry and racism. I see inequality, fear, envy and a ruthless instinct for self-preservation at the expense of others. But I also see generosity, idealism, energy and hope. And I see an underlying culture that endures despite the ravages of sudden wealth, globalisation, sectarianism, tyranny and conflict. I find that in the people I meet, not in the headlines I read.

I have no romantic delusions about Ibn Battuta’s time, any more than I have about the current state of the lands he passed through. But I do believe that those who spend time in those lands today should try to gain a deeper understanding of what lies beneath and behind the land and the people. And I firmly believe that if those who make decisions about this region from afar had just a little of the insight of Tim Mackintosh-Smith, Tahir Shah and a handful of others, their thinking might be much the wiser.

And it’s good to know that there are still Westerners at large in the region who are here for love, and not purely for material gain, even if such people are relatively rare.

You can find out more about Tim’s books at his website. They are well worth a read. If I was a Yemeni, I would regard him as a national treasure. In my mind at least, that country is no longer Arabia Demens.