This Ramadan ‘A Miserable, Painful Time’ For Syrian Families 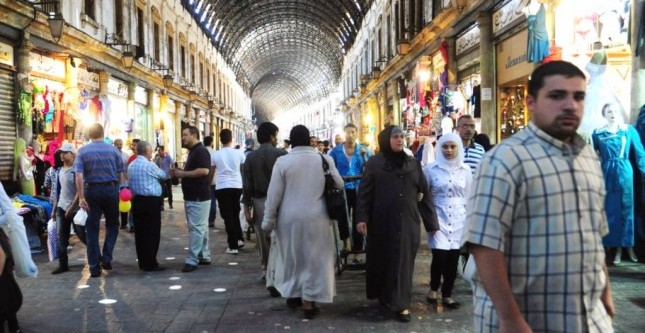 “This year, we are alone and we don’t know what we will do for money and food supplies during Ramadan… This Holy Month is completely different and horrible.”

This is how one Damascus resident — dreading the third Ramadan since the Syrian revolution erupted in March 2011 – put it.

I am sure he is not alone.

It comes as no surprise as Syria faces the world’s worst humanitarian disaster that has left more than 100,000 dead, displaced 4.25 million people internally and forced more than 1.6 million to leave the country to seek refuge in Jordan, Lebanon, Turkey, Iraq and further afield. The number of people in need is expected to rise to 10 million, nearly half of the population, by the end of the year.

Cham, who I met on Twitter and goes by the handle @chamsyria, wrote for Mich Café on how he and his family will be coping this Holy Month.

He is from Damascus. “We lived in the old part of the city. It was always hard going. My mother was afraid of politics and didn’t allow us to be active. But at school, then at university, it was difficult not to get involved. You had to be part of the [ruling] Baath Party or your life could get very complicated, which is what happened to me.”

“My work as a travel agent stopped because of what happened in Syria. We haven’t had an income for more than two years. It is difficult to provide food and medicine for my family.

“My office landlord is threatening me with eviction because I can’t pay the rent. But without an office I will go crazy. I can’t even think about it…

“Our home was destroyed. We lost everything in it, even our memories…  Then we fled to central Damascus.”

Cham says that where he now lives with his family everything is controlled by the regime of Syrian President Bashar al-Assad. “Every single meter, you find regime militias, security forces, Air Force Intelligence and public guards.”

Ramadan is a very important month, he says, not only because of our relation with God, but also because it is a month “when families unite, sit together for iftar (breaking of the fast) in an atmosphere of faith, spirituality, forgiveness and tolerance.”

While fasting from dawn until sunset during Ramadan, Muslims refrain from consuming eating, drinking liquids, smoking and engaging in sexual relations; in some interpretations they also refrain from swearing. According to Islam, the thawab (rewards) of fasting are many, but in this month they multiply.

“We used to buy many things before the Holy Month starts in anticipation of prices going up,” Cham continues. “This year, everything is expensive. Meat and chicken are more than SYP1200, basics such as sugar SYP115…”

At iftar, the most important dish on the table is foul medammas, fatteh, salads and all kinds of juices.

“We used to have one or two main dishes, including the above and gather all the relatives. But since last Ramadan, we are too scared to move due to the many checkpoints around the city. It’s not safe to go out at night. I haven’t been out at night in more than two years. It’s best to be home before dark,” Cham says, adding:

“Last year we were about 15 people in one small home, all of us having fled their main residence. Three families had left because their homes were destroyed, including my own, by regime MIGs. Regime militiamen have killed some of our relatives or close friends. One of our female friends was raped and killed by Public Committees guardians along with her father and brother in Douma.”

“This year, my family is alone during Ramadan,” Cham says sadly. “We don’t know what we will do to buy food. My wife and I are always worried and wondering how we will manage. The children wonder whether we will be able to celebrate Eid or if we will stay home again, like previous years.”

He adds, “Ramadan is completely different and horrible now.”

In the evening, dates are usually the first food to break the fast; according to tradition, the Prophet Muhammad (PBUH) broke fast with three dates. Following that, Muslims generally adjourn for the Maghrib prayer, the fourth of the five daily prayers, after which the main meal is served.

“We don’t know if we will dare go to the mosque this Ramadan, especially for the isha prayers and Taraweeh,” Cham notes. “We don’t know how the security situation will be. We don’t know if regime militias will prevent us from going to prayers as they did in many cities around Syria. We know they killed people who were praying fajr or after Taraweeh in Zamalka, Irbin, Douma and Harasta near Damascus.”

Cham’s remarks came as United Nations agencies warned that millions of Syrians are in need of food air as the more than two-year war has devastated food production in the country.

A joint report from the World Food Program and Food and Agriculture Organization says that if the present conflict continues, the food security prospects for 2014 could be worse than they are now. “With so many adverse factors now stacked against the crop and livestock sectors, and assuming that the present crisis remains unresolved, domestic production over the next 12 months will be severely compromised,” the report said.