The Vogue-Assad Controversy: A View from Syria 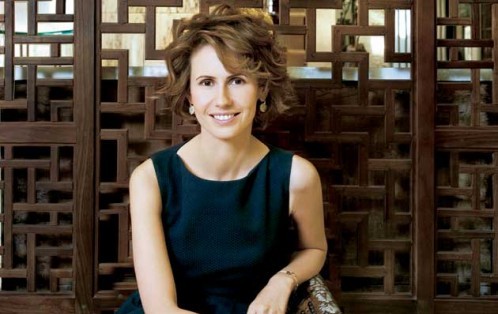 It whipped up a storm on the net. Now Vogue is explaining why it chose to run an apolitical profile of Asma Al-Assad at a time like this.

“We thought we could open up that very closed world a very little bit.”

And that, they did. He goes on:

“The piece was not meant in any way to be a referendum on the al-Assad regime. It was a profile of the first lady.”

On accusations that the story was a propaganda puff piece:

“I think the way they portray themselves [in the story] is probably pretty accurate.”

And what of the weird timing:

“By the time the article was closed and shipped, in mid January, we had only just learned about events in Tunisia.”

For an analysis of what went wrong, you’d think Fisher would check his own facts. But no, his sloppy writing leads him to say:

“Bashar’s Syria has invaded Lebanon, allied itself with Iran, aided such groups as Hamas and the Iranian Revolutionary Guard Corps, and, for years, ferried insurgents and terrorists into Iraq, where they kill U.S. troops and Iraqi civilians.”

Not even the US army has accused Syria of “ferrying” fighters into Iraq – the worst accusation is that they have turned a blind eye, or not secured the border. And, as far as I am aware, “Bashar’s Syria” never invaded Lebanon.

What interests me is the hypocrisy this article is bringing out in my peers. They slam Vogue for running this story, but I suspect (and some have admitted) that they would stay silent if Vogue ran a fawning story on Queen Rania of Jordan. I don’t seem to remember many cries when Glamour magazine picked Rania as a Woman of the Year 2010

One Response to The Vogue-Assad Controversy: A View from Syria