The Salalah ‘Invasion’: Some Planning Please 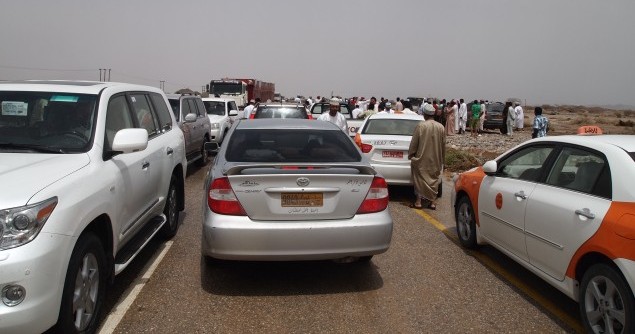 Insanity is the only suitable word I can think of to describe the current situation in Dhofar. In case you are living in a bubble or are new to the country, let me enlighten you.

While the rest of the Middle East melts during July and August, the Dhofar region in the south of Oman experiences a very cool and wet monsoon, and our town becomes a tourist magnet. This year the holy month of fasting happened to coincide with our rainy season and this caused a predictable decrease in the number of tourists.

We foolishly assumed that very few tourists would come during Eid because normally people spend Eid with their families, right? Wrong. On the first day of Eid local majlis gossip revolved around the Haima crisis. Apparently there were hundreds of vehicle stranded without fuel trying to get to Salalah and most stations along the desert route were empty. Slowly, traffic became more and more congested in town and you could practically hear the mountains rumble as convoys of UAE land cruisers sped their way into Salalah.

Within a few hours, car rental agencies were out of vehicles and all hotels and apartment blocks were fully booked. Rumour has it that hundreds of tourists spent the night in mosques or under the stars because they couldn’t find any place to stay. By the second day of Eid, many locals had rented out parts of their homes or even their entire houses to desperate tourists who were willing to pay anything for a place to stay. Those who weren’t able to find accommodation in Salalah sought shelter in the neighbouring towns of Taqah and Mirbat.

By the second day, Salalah was out of basic necessities like milk, bread and petrol. An errand that would normally take five minutes took more than an hour, and UAE licence plates seem to have outnumbered Omani ones at one point.

Police attempted to control the insane traffic with very little luck. The roads leading up into our emerald green mountains and valleys witnessed back-to-back traffic. In fact, ROP officers had to turn people away from popular tourist spots like Darbat Valley and Ittin to avoid a major crisis.

Official statistics confirmed nearly 100,000 visitors to Dhofar last week, most of whom arrived by car. Do you have any idea what that means for us? The population of Salalah according to the 2010 Census was a miserable 172,000. This town and its roads weren’t at all prepared for a 50 per cent overnight population increase. Locals are jokingly referring to it as The Invasion.

It’s nice to see so many people enjoying our monsoon, but I am baffled at how the huge influx of tourists was handled. Were MoT officials snoozing during Ramadan? Millions and millions have been spent to promote tourism in Dhofar. If most hotels and flights were completely booked out in advance, surely someone could have suggested a back-up plan just in case? Temporary sleep cabins like the ones set up for the London Olympics would have been useful. Several hundred of Muscat Municipality’s new portable paid public toilets would have come in handy as well. The long washroom line-ups at local mosques last week were insane.

Furthermore, I know this isn’t the ministry’s fault but someone is going to have to think of a better garbage system. Our beautiful mountains have been littered with zillions of soft drink cans and plastic bags because many visitors haven’t been able to grasp the idea of storing trash in the car until you find a suitable place to dispose of it.

I know we like to pretend everything’s fine in Oman, but the current situation is just embarrassing and frustrating for locals and tourists alike. Officials are going to have to think of a better way to handle tourism because the numbers are going to increase every year and our economy needs it. A little planning and logical thinking goes a long way.