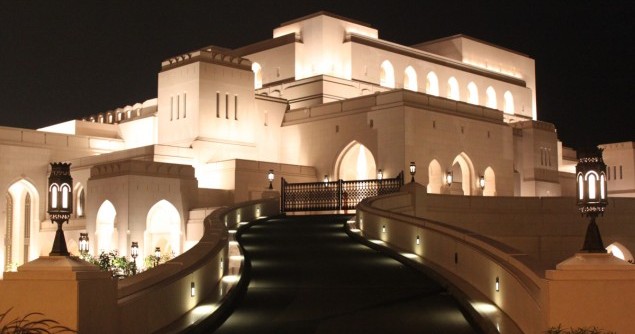 Unless you’ve been living under a rock (or in Salalah!), you’re well aware of the fact that a couple of weeks ago during an American jazz performance one of the Muslim band members recited verses from the Holy Qur’an. The ROHM sensibly issued an official apology the next day assuring the public that the person involved in the recital did so only out of love for his religion and had no intention of mocking Islam.

Within hours, details of the incident began circulating online. The matter was even escalated to Oman’s Grand Mufti, the highest religious authority in the country for his opinion. Horror turned to outrage very quickly and soon enough busloads of the devout from various parts of Oman arrived at the ROHM to peacefully protest while clutching copies of the Qur’an. On the second evening of protests this past Friday the riot police were sent in to cordon off the area and disperse the crowd.

After the protesters refused to leave, arguments with security forces soon escalated to violence. The photos that have been circulating online this week show pious Omanis with blood trickling down their faces clutching their Qur’ans. Other photos show them being loaded into buses on their way to an undisclosed detention centre. Not a pretty sight.

If you are new to the Muslim world, you’re probably baffled and wondering why this was an issue in the first place. You might even be thinking the whole incident is ridiculous.

Let me enlighten you. Many parts of Oman are still very conservative and we take our religion seriously. Reciting verses from the Quran during a musical performance is an offence to many who feel it violates the sanctity of our holy book. Because all residents in Oman fully respect this, such incidents are extremely rare. Therefore, when an incident does occur we are unable to deal with it. It is outside our comfort zone. To be honest, even I would have felt extremely uncomfortable had I been in the audience at the time.

As a Muslim woman born and raised in a conservative family, I fully understand why so many Omanis were furious and felt the need to go out and protest. On the other hand, there are many of us who can also see that the Muslim band member had no intention of offending anyone. In fact, he probably thought we would be delighted. As far as I’m concerned, the whole issue is a complete misunderstanding that should have been forgotten the next day. I am a great fan of the Royal Opera House and don’t see for the life of me why they were being blamed for the incident, or why blame is needed at all!

However, a couple of other things have been bothering me. As many of you know, Oman restricts freedom of assembly both in law and in practice. Any public gathering of ten or more people requires government approval. As ridiculous as this law may seem, authorities have taken it very seriously after the Arab Spring protests, hence the dozens of Omanis serving jail time right now for ‘illegal gathering’. (PS: this law exists in many countries)

Laws aside, Oman is a Muslim country. From a human rights and religious perspective, those protesters had every right to speak out. They may have broken a controversial law, but they were only expressing what they felt was their love for Islam and did not constitute a threat to this country’s security. The photographs of the clashes with the riot police were extremely disturbing and do nothing for Oman’s image in the international human rights arena.

There is one other issue that I find a little worrying. Delicately put, Omanis in general don’t seem to be getting worked up about the right things. They could have been out on the streets protesting against drugs, rape, female genital mutilation, or even the horrifying reports of sexual and physical abuse of medical interns at local hospitals that were brought to light last week. Are we turning a blind eye to serious issues taking place in our country that are more deserving of our attention and action?

I know it’s horrifying to some for a woman to be expressing her opinion so bluntly on such a sensitive issue. Nevertheless, it is only expected for opinions to vary and I am entitled to my opinion. On a final note, I think last week’s incident is yet another healthy lesson for Oman that open dialogue and free speech are needed in order to bring issues out into the open and work our way towards a better future. Your thoughts?