The Problem With ‘Argo’: An Orientalist Viewpoint 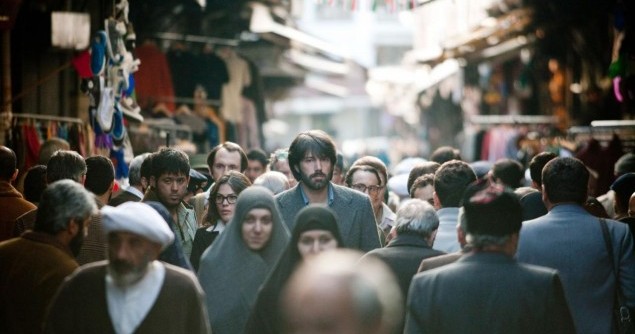 The taking of US diplomatic personnel hostage by radical Iranian activists and angry crowds in November of 1979, and then the backing for this action of the government of Ayatollah Ruhollah Khomeini, was profoundly illegal. I know some of the former hostages, and deeply sympathize with their trauma. Nothing justifies what was done to them.

But Ben Affleck’s otherwise fine, Oscar-winning film, “Argo,” about the escape of some US embassy personnel, functions as American propaganda and a sort of neo-Orientalism. That it was based on a memoir of the incident by a former Central Intelligence Agency operative involved in the rescue is part of the problem. That memoir is a primary source and valuable, but good history, and good story-telling about history, weights sources and tries to correct for their biases. “Argo” does not. Some of the Iranian objections to the film are equally grounded in propaganda concerns, but some are legitimate.

It isn’t just that the memoir slights the massive contribution of the Canadian embassy and Canadian diplomats to the mission and plays up the relatively minor CIA role. (Virtually every good idea that contributed to the success of the rescue came from Canada, but somehow American movie audiences insist that it all has to be about us.) Nor that Britain’s important role is denied and even denigrated Nor is my main objection that a whole series of exciting events are invented that never occurred. It is that the entire context for these events is virtually absent and the Iranian characters are depicted as full of mindless rage.

Although the film begins with an info-dump that explains that the US screwed over Iran by having the CIA overthrow the elected government in 1953 and then helped impose a royal dictatorship in the form of the restored shah, that part of the film is emotionally flat. It tells, it doesn’t show. It is tacked on. It does not intersect with the subsequent film in any significant way. It therefore has no emotional weight and does little to contextualize the Iranian characters (none of whose names I think we even learn).

“Argo highlights the negative attitudes that the two countries have held toward each other for decades. Its brief introduction attempts to provide historical context behind the embassy takeover, but the film does not convey the prevailing Iranian sense of grievance — real or imagined — that led to the 1979 attack, and to the emotional response in the streets of Tehran . . . More than three decades later, the same atmosphere of suspicion, mistrust, and festering wounds dominates Iranian-American relations.”

You could have had Iranian characters angry that the American-backed Shah or king, Mohammad Reza Pahlevi, had arbitrarily imprisoned them or their friends among the dissidents, and had subjected both intellectuals and members of openly revolutionary groups to torture and murder in prison. That would not in any way have justified what was done to Foreign Service Officers of the State Department, but it would have humanized the Iranian villains of the piece and made the film more complex and less like a comic book.

“Argo” could have been a moment when Americans come to terms with their Cold War role as villains in places like Iran. It could have been a film about what intelligence analysts call “blowback,” when a covert operation goes awry. Instead it plays into a ‘war on terror’ narrative of innocent Americans victimized by essentially deranged foreign mobs.

” Mehdi Rezaei, an MKO member, was arrested in April 1972 and executed that September at the age of 20, after enduring horrific torture. Ali Asghar Badizadegan, one of the MKO’s founders, was forced into an electric oven according to his comrade Lotfollah Meysami. He was burned so badly that he became paralyzed, and the SAVAK refused to turn over his body after he was executed in May 1972. As Ali Gheissari writes in Iranian Intellectuals in the Twentieth Century, under Sabeti the Committee was also “responsible for the arbitrary detention, interrogation, and torture of many university students during that period.”

The Shah’s feared secret police, and his entire repressive regime, did not function completely on their own. They had been installed by the US in cooperation with far rightwing Iranian generals and the Iranian equivalent of billionaires, and SAVAK and the regime continued to have close links to the CIA. It is alleged that some of the torture techniques used by the Shah’s SAVAK were taught to them by the CIA. And, it is further alleged that the CIA itself had front groups on and was active in spying on Iranian campuses, in parallel to operations such as COINTELPRO in the US. The anti-Shah Iranian students piecing together shredded US embassy cables in Tehran weren’t looking for photos of the escaped diplomats, as “Argo” implies. (There was no last-minute identification of them or car chase on the tarmac– that was all made up). They were looking for evidence of the ways the intelligence officials under cover at the embassy had been monitoring them and their friends and putting them in torture cells.

Such spying on Iranian dissidents was a very minor part of what US intelligence was doing in Iran at that time– allegedly only three field officers even knew Persian. Mostly they were using Iran as a listening base to spy on the Soviet Union. But keeping Iran subservient and docile was key for Washington to remaining able to deploy its petroleum for Western economic success versus the Warsaw Pact and Communist China, and to being able to use Iran for monitoring the USSR. Hence, some resources were also devoted to repressing critics of the shah. And while liasing with SAVAK to arrest intellectuals and dissidents may have been a subsidiary effort for the Agency, for those whose lives were ruined by the Shah’s apparatus of repression, it rather bulked large.

The US embassy personnel taken captive were not responsible for the Shah and what he did to the Iranian people, but the US government did whatever it could to back the Shah and protect him from international criticism.

The Iranian crowds are depicted in the film as irrational mobs. The Revolutionary Guards at the airport are depicted as angry puritans, worried about Marvel artist Jack Kirby’s somewhat salacious storyboards for the proposed “Lord of Light” film that the CIA optioned for the operation(based on a novel by Roger Zelazny). No Iranian character in the film who has a legitimate grievance against US policy is permitted to be sympathetic or to have any intimate moments that would humanize him or her.

The film tells but doesn’t show some of the US atrocities in Iran. It shows the plight of the hapless US diplomats. In making that key dramatic decision, and then in Orientalizing the Iranian protagonists as angry and irrational, the film betrays its subject matter and becomes propaganda, lacking true moral or emotional ambiguity. Roger Zelazny’s and Jack Kirby’s “Lord of Light” would have been more nuanced.